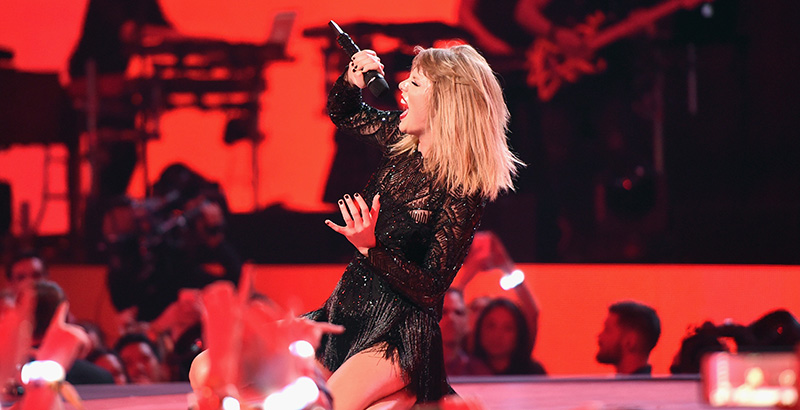 As Taylor Swift releases her sixth studio album, Reputation, on Friday, there’s only one question pressing upon the public consciousness: What does Taylor Swift think of the Every Student Succeeds Act?

Of course, she’ll never come out and directly say; it takes a sleuth digging through her heavily shrouded lyrics to find any sort of real meaning:

ESSA's the reason for the teardrops on my guitar/The only thing that keeps me wishing on a wishing star. https://t.co/1d6SmKmvl6

Perhaps Swift is so compelling to the education policy community because of her obsession with the theme of accountability, said Swift lyrics analyst David Cantor. “Throughout all her songs, she consistently holds the men accountable,” Cantor said, adding, “Well, not, ‘Look What You Made Me Do.’ That’s actually her biggest anti-accountability song.”

Even if Swift will not publicly share her opinions on the Common Core and school vouchers, we’ve identified education policy areas where she has come out in some pretty Fearless ways … Are You Ready for It?

There’s Lots of Social-Emotional Support for Students, but Not for Teachers. Here Are Some Programs Looking to Change That
“Were you just kidding ’cause it seems to me, this thing is breaking down, we almost never speak, I don’t feel welcome anymore, hey school district what happened, please tell me ’cause one second it was perfect, now the students are halfway out the door.” — Forever and Always

Opt Out Round II: States Walk a Line Between Boycotters’ Demands and Feds’ Funding Threats
“Don’t be afraid, we’ll run away from this mess, it’s the Opt Out movement, baby just say yes (actually no, please say no to tests).” — Love Story

President Trump Donates $100,000 of His Salary to Education Department; Still Wants $9B Cut to ED Budget
“Now we’ve got problems, and I don’t think we can solve ’em. You made a really deep cut, and baby, now we’ve got bad blood…and also no money.” — Bad Blood

2 in 3 High School Students Know of Kids Who Cheat Using Digital Devices — but Few Admit Doing It Themselves
“You should’ve said no, you should’ve gone home, you should’ve thought twice before you let it all go, you should’ve know that word, ’bout what you did on that test, would get back to me.” — Should’ve Said No

Portland Schools End Up in National Spotlight After Suing Parent Activist, Reporter Over Public Records
Reporter: I’ve got a list of names and yours is in red underlined. I check it once, then I check it twice.
School District: Oh, look what you made me do, look who you made me sue.
— Look What You Made Me Do

Science Is for Boy Scouts; Critical Thinking Is for Girl Scouts. Here’s How They Differ in Their Gendered Messaging to Children
“When you’re 15 and boys talk over you in class, you’re gonna believe it. And when you’re 15 feeling like the girls will never dismantle the patriarchy. Count to 10, take it in, this is life, before you go get your MBA. I didn’t know it at 15.” — Fifteen

A ‘Start School Later’ Success Story in Missouri: Higher Graduation Rates, Fewer Suspensions
“‘Cause I don’t know how it gets better than this, you let me sleep in and I come to school fearless. And I don’t know why but with more sleep I am more likely to graduate.” — Fearless

House Republicans’ Tax Plan Has Implications at All Levels of Education
Opponents: I knew you were trouble when I walked in.
Supporters: Haters gonna hate hate hate hate hate.
—I Knew You Were Trouble and Shake It Off

New Research: As Tuition Rises, Vaunted Public Universities Cater to a Wealthier Clientele
“Big reputation, big reputation, ooh, you and me would be a big conversation, aah, and I heard about you, ooh, you like the fancy schools, too.” —End Game

With Batman & Batmobile Costume, Washington School Resource Officer Is a Real Live Superhero Cop
“Tall, dark and Batman, he puts on his uniform and drives away, to save the world or go to work, it’s the same thing to kids.” —Superman

Fake Education News? With False Betsy DeVos Report, Progressive Sites Fall Victim to the Very Fake News Trend They Criticize
“This fake news is blowing up the left wing, high above the whole scene, DeVos leaving soon? Call it what you want, yeah, call it what you want to.” —Call It What You Want