President Trump Donates $100,000 of His Salary to Education Department; Still Wants $9B Cut to ED Budget 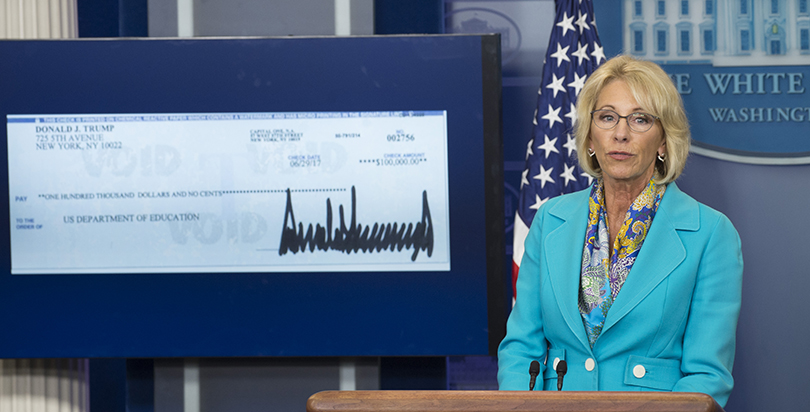 The White House announced Wednesday that President Donald Trump is donating his second-quarter salary — totaling $100,000 — to the U.S. Department of Education, a gift Education Secretary Betsy DeVos said was “generous.”

“The president has truly shown his commitment to our nation’s students and to reforming education in America so that every child, no matter their ZIP code, has access to a high-quality education,” DeVos said at Wednesday’s White House press briefing.

The announcement came a day after DeVos and Ivanka Trump, the president’s daughter, attended a summer reading event at the National Museum of American History in Washington with a focus on engaging girls in science, technology, engineering, and math.

The president’s salary, the administration announced, would be used to help fund a STEM-focused camp at the Education Department.

Notable, however, are Trump’s proposed budget cuts to the very department he’s chosen to support with his salary. Those cuts totaled $9.2 billion in the White House’s budget proposal, a 14 percent reduction to the agency’s roughly $68 billion budget. Those proposed cuts, which eliminated funding for after-school programs and teacher training while adding new money for private school choice initiatives, were scaled back earlier this month by the House Appropriations Committee. The House bill would cut about $2.4 billion from the Education Department’s budget, most of it coming from teacher assistance grants. (Read Carolyn Phenicie’s report on the House subcommittee vote)

“We want to encourage as many children as possible to explore STEM fields in the hope that many develop a passion for these fields,” DeVos said Wednesday.