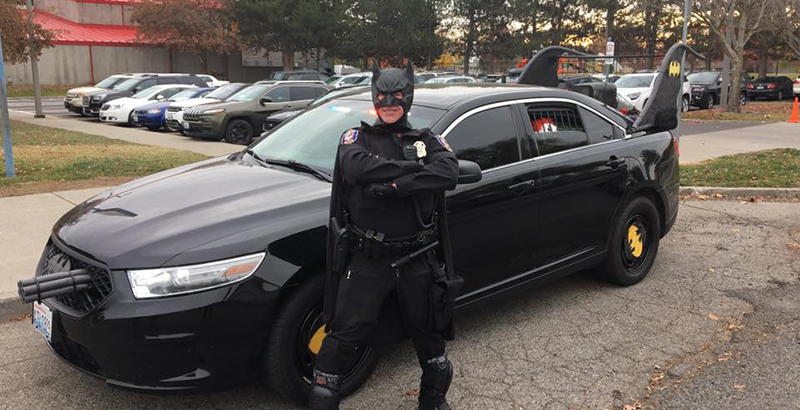 Halloween was just the excuse Police Officer Scott Hice needed to transform himself into Batman — and his car, of course, into the Batmobile. And that transformation was a hit with not only the sixth-graders at Spokane’s Whitman Elementary School, but just about everyone who got a look at him.

🦇🦇🦇🦇 I'm Batman!! 🦇🦇🦇🦇Thank you Officer Hice for being a great Neighborhood Resource Officer for Northeast Spokane…

Posted by City of Spokane Police Department on Tuesday, October 31, 2017

“The kids get so excited,” Hice told ABC News. “It’s not just the little kids, but that’s my favorite. They get the most excited. They really think I’m Batman and ask me if the Batmobile flies. But the junior high kids love it too.”

Hice spent a weekend working on his patrol car with his dad, giving it the full Batmobile makeover, with wings, decals, and a fake gun out the front grill. Originally, Hice planned for his costume and the car to serve as a treat for the sixth-graders graduating from a gang-resistance education program on Halloween. But when the Batmobile rolls up to school, everyone takes notice.

Police officer dressed as Batman, complete with his very own "Batmobile," gives students the surprise of a lifetime. https://t.co/UyOY3eT5KX pic.twitter.com/bKfSyuEWdC

“It was a way for them to build that community with our local law enforcement,” Principal Jody Schmidt told ABC. “For our kids, it was a really positive experience. The more they can interact with our law enforcement, the better relationships they build. That’s a really great thing.”

The Spokane Police Department resource officer said the Batmobile design worked out better than he expected, with most not even realizing it was a police car.