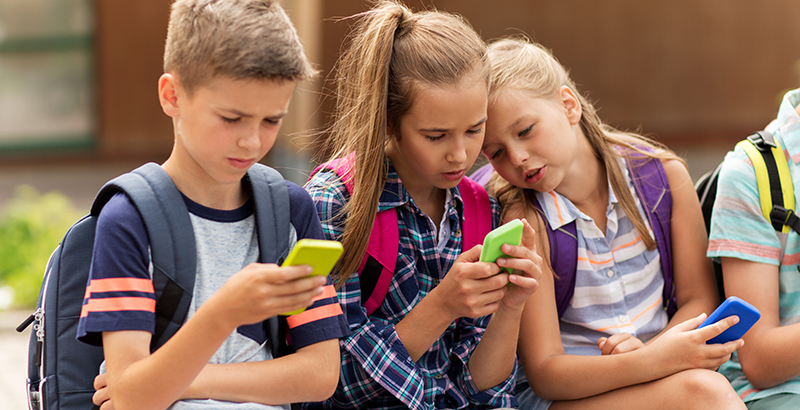 Bullying among teens is nothing new, but social media outlets are providing new avenues for it, often out of sight of parents and teachers.

Nearly one in three American high school students has been a victim of cyberbullying, according to a recent study by the cybersecurity company McAfee. Students reported witnessing or experiencing cyberbullying on all eight platforms listed on the survey, including Instagram, Facebook, Snapchat, and YouTube, according to results the company provided to The 74.

However, experts said cyberbullying happens on other platforms as well.

“If you think about how traditional bullying happens, it’s usually outside the purview of adults … and we find it’s much the same case with online bullying,” Hertzog said.

Students also use other apps to communicate online, said Ross Ellis, founder and CEO of Stomp Out Bullying. Ellis said she has heard about students using Tumblr, Askfm, After School, WeChat, and even Tinder to chat and, sometimes, to bully. She called these apps “breeding ground for bullying” — and expressed concerns about a new, free app called Sarahah that allows anonymous posts to be sent directly to users.

“It’s ready-made for cyberbullying,” Ellis said, adding that pervasiveness of social media is part of the danger.

“It’s never going to go away. Kids check their social media minimum a hundred times a day. That’s minimum,” she said. “They always need to know, especially the girls, what is being said about them. There’s a tremendous need, and there’s also a tremendous need to respond if something bad is being said. And that’s the worst thing that they can do. Because once they light that match, it’s going to turn into an inferno.”

Because of this, parents need to learn what their kids are doing on social media, Ellis said, by reading reliable sources online, looking for community groups or classes that explain different apps, and trying them out. Without knowing what’s out there, parents won’t be able to help their children.

“It’s got to start at home,” Ellis said.

Nearly half of the surveyed teens said their parents try to help them deal with cybersafety issues. The students’ responses to the question “While at home do your parents talk with you about how to stay safe online while using connected devices? (either personal or school-owned)”:

When problems do arise, Hertzog said, parents should focus on talking to their children about problem-solving and responsibility around technology rather than taking away their devices.

“It’s not about removing kids’ access to tech, but instead letting them know that you’re going to help them talk through what options they have if (bullying) happens online and show them how to have a good, positive experience online,” she said.

The best way to prevent cyberbullying, said McAfee’s Gary Davis, is to embed expectations about responsible use of technology in school culture. Children are comfortable using phones and tablets as young as 2 or 3 years old, so teachers and parents should talk about responsible use sooner rather than later.

“I would love to see a discussion like this at the kindergarten level,” Davis said. Responsible use of technology should be part of the “school’s DNA,” he added.

About 1,200 American students ages 14 to 18 participated in the study, which was conducted in June and also included questions about cheating in school using technology. The full study included students from the United Kingdom, Australia, and Canada. Americans reported more cheating and more bullying than their peers from the other surveyed nations.