Science Is for Boy Scouts; Critical Thinking Is for Girl Scouts. Here’s How They Differ in Their Gendered Messaging to Children 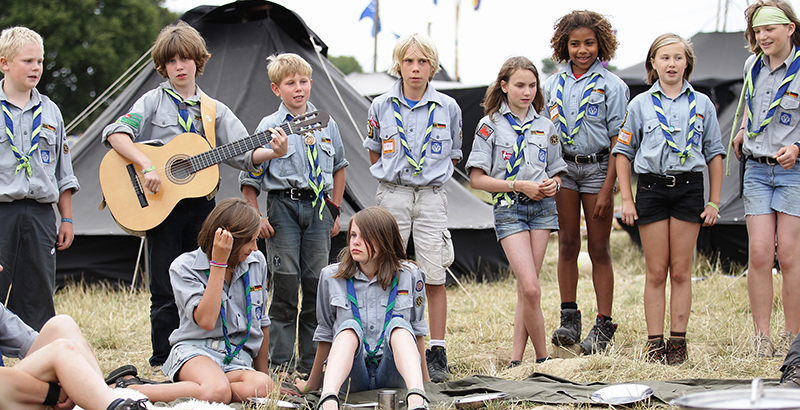 When Boy Scouts of America announced this week that it would admit girls, the national board chairman boasted that “I’ve seen nothing that develops leadership skills and discipline like this organization. It is time to make these outstanding leadership development programs available to girls.” Apart from garnering a heavy eye roll from the Girl Scouts, it also raised the question: What can children get from one scouting organization that they aren’t already getting from the other?

Afterall, both troops trek their kids into the wilderness. Both boast hundreds of badges for their scouts to earn. Both emphasize leadership and citizenship. Both have a hierarchy of prestigious service awards that look great on a résumé. Both knock on your door once a year selling addictive, overpriced snacks.

But research comparing the two organizations reveals distinct differences in the messaging and programming available to boys and girls. The two don’t equally emphasize critical thinking, arts, science, autonomy, community service, and careers. And while a large collection of research can’t quite agree on whether single-sex institutions are helpful or harmful, it might be better for boys and girls if each organization would take a page out of the other’s scouting handbook.

Consider rocks — there can’t be a less gendered topic to explore. But a 2011 study published in Gender and Society found a mountain of difference in the way Boy Scouts and Girls Scouts teach it.

Boys could earn a professional-sounding Geologist Badge, while girls earned one with a much cuter name: Rocks Rock. But when boys learned about rocks, they responded to questions about minerals and mountains in a booklet with all the answers available. Conversely, girls were required to do research, start a rock collection, classify them using their own source materials, learn about natural disasters, or connect with a group fighting erosion.

The study found that other badges followed this pattern: Boys’ badges were more likely to have career-sounding names, but girls’ badges required research and critical thinking skills. A look at the organizations’ subject areas found that 11 percent of Girl Scout activities were arts-focused, while only 2 percent were science-oriented. Meanwhile, 6 percent of Boy Scouts’ activities were arts and 6 percent were science.

Messages in the handbooks also showed gender differences. In the Girl Scouts, 30 percent of the content focused on community-oriented activities, compared with 17 percent in the Boy Scouts’ book, which focused much more on the self. The researcher also found girls were presented with more “I’ll try” statements or promises, while boys were presented with “I am” or “I will” attitudes.

“I think that just highlights, when you separate boys and girls, the environment and the culture diverges,” said Lise Eliot, a neuroscience professor at Rosalind Franklin University who’s written about gender stereotypes.

Neither the Boy Scouts nor the Girl Scouts responded to a request for comment.

Both organizations have come a long way since the beginning of their 100-year histories. This year, Girl Scouts added 23 new STEM and outdoor badges, many with career-focused names like “Think like an Engineer” or “Think like a Programmer.” Meanwhile, the Boy Scouts have overcome some exclusionary policies, such as barring gay members and not allowing women to be troop leaders.

Even this new move by the Boy Scouts isn’t completely inclusive or integrated. Although boys and girls will have the same curriculum and can earn the same awards, they will remain in single-gendered dens.

Single-sex institutions can be limiting for both boys and girls, Eliot said. “I always claim we restrict kids’ development by plotting them into the boys’ chute or the girls’ chute in terms of what activities can you do and who can you talk to, and it really limits the full range of one’s human potential to only hang out with half of the population,” she said.

Moreover, if society expects to have workplaces where men and women treat each other respectfully, that training has to start with children, Eliot added.

Research on the benefits of single-sex organizations reveals ambiguous results, according to a literature review from the American Institutes for Research, some finding benefits for academics and aspirations and others finding no benefit or negative consequence.

Still, Eliot pointed out a cultural inequity with the Boy Scouts’ embracing of girls. While it’s seen as acceptable for girls to join boys’ activities, society views boys joining girls’ activities with heavy skepticism, which could spell out trouble for the Girl Scouts.

The Girl Scouts’ national president accused the Boy Scouts of trying to boost their declining membership by appealing to millennial parents, according to a letter obtained by BuzzFeed. Currently, the Boy Scouts have 2.3 million members, versus the Girl Scouts’ 1.8 million. But the Boy Scouts responded that the move was made in response to requests from parents to have their children under the umbrella of one organization.

Other countries have shared-gender scouting organizations labeled under a gender-neutral name, such as Scouts Canada and Scouts Australia. The Boy Scouts said there are no plans to change its name, according to the Chicago Tribune.