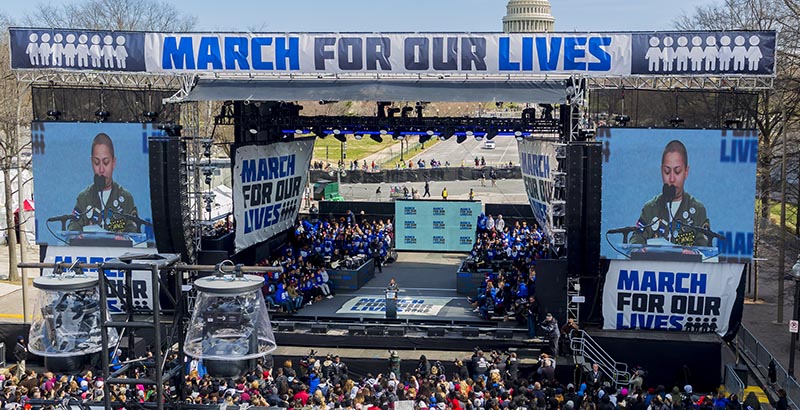 The second year of the Trump presidency has been one for the history books, particularly in the realm of K-12 education.

Some moments this year were unforgettable, either for their sheer emotional power and size, like the waves of student-led gun control and school safety advocacy, or for their potential to upend the way schools operate, like the Supreme Court’s Janus decision.

Others, like the Trump administration’s proposal to merge the Education and Labor departments, would’ve been huge news in any other administration, but even we forgot about it all on the first pass in making this list.

And some, like the first full year of education funding bill passed on time in a decade, were important news only to the nerdiest of education policy nerds. (Guilty.)

Without further ado, here are the seven biggest federal K-12 policy stories of 2018.

The Valentine’s Day shooting in Parkland, Florida, killed 17 students and teachers and spurred a wave of student activism that lasted the rest of the year.

They walked out of school and marched on Washington. They registered voters, spurring a record turnout of young people in the November midterms. And they wrote a student safety bill of rights.

In response to the shooting, lawmakers at the state and federal levels poured money into school safety programs. President Trump first considered backing more gun control, but later put his focus on arming teachers, an idea educators roundly panned. News leaked that the Education Department was considering allowing schools to use federal grants to train teachers. Education Secretary Betsy DeVos and several other cabinet officials launched a school safety commission. Their report, which DeVos said would be complete by the end of the year, had not been released as of press time.

The Supreme Court in June ruled that dissenting public-sector employees may no longer be compelled to pay any union dues. Requiring them to do so, as a long-standing precedent had, violated their First Amendment right to freedom of speech, a 5-4 court decided.

“It is hard to estimate how many billions of dollars have been taken from nonmembers and transferred to public-sector unions in violation of the First Amendment,” Justice Samuel A. Alito wrote for the majority in Janus v. AFSCME.

Unions had long said the dues were necessary to prevent “free riders” from benefiting from union-negotiated contracts without paying, and dissenting justices said the decision had the potential to upend thousands of labor agreements across the country.

Experts said the ruling could decimate the membership rolls and coffers of public-sector unions, who are big funders of Democratic campaigns; teachers union leaders said members are sticking with their unions.

More cases are already in the works, including class actions challenging decades of mandatory union fee deductions and lawsuits seeking to overturn some states’ laws that seek to protect public-sector unions.

3 Proposal to merge the Education and Labor departments:

The Trump administration in June proposed combining the Education and Labor departments into one “Department of Education and the Workforce.” Administration officials said it would combine the agencies’ overlapping duties in workforce training to more effectively respond to market needs.

Democrats and progressives panned the proposal as playing down the Education Department’s important roles in ensuring civil rights and educating young children, noting that the agencies have oversight of vastly different areas, from special education to mine safety.

The proposal went nowhere fast, and, with Democrats set to retake control of the House (and rename the Education and the Workforce Committee to Education and Labor) the idea will remain in the annals of weird education policy trivia.

4 DACA, immigration, and the government shutdown:

It’s a fading memory, but the government did shut down in early 2018, briefly, over the fate of the Dreamers, young people brought to the country illegally as children whose temporary legal protections Trump has sought to end.

The Deferred Action for Childhood Arrivals program, better known as DACA, has wide bipartisan support among voters and in Congress. A California appeals court in early November upheld a nationwide injunction blocking the Trump administration from ending the program, as have district courts in New York and the District of Columbia. The Supreme Court could move on the issue by June 2019.

Elsewhere, members of Congress pressed the Trump administration on what kind of education was provided to immigrant children detained by the government, including those separated from their families at the southern border.

And finally, DeVos got caught up in a controversy over whether schools can report students they suspect to be undocumented to immigration authorities.

“We are both a nation of laws and we are a compassionate people,” she said several times.

If laws need to be changed, Congress should do so, she added in response to questions from New York Democratic Rep. Adriano Espaillat, the first formerly undocumented member of Congress.

DeVos referenced Plyler v. Doe, a 1982 Supreme Court decision that requires schools to provide a K-12 education to all students, regardless of immigration status, but said the decisions to report suspected undocumented immigrants are “state and local issues to be addressed and dealt with.”

Civil rights groups called the comments a “misrepresentation of the law” that caused “fear and confusion for children, families, and educators.” A department spokeswoman later said DeVos’s position was that schools must comply with the Plyler decision and other applicable laws.

Congress often gets a reputation for not doing anything and failing to meet deadlines for reauthorizing key laws. That’s particularly true in education (see: the Higher Education Act, due for reauthorization in 2013, or the Head Start Act, overdue since 2012).

They checked one long-overdue ed reauthorization off their list this year, overwhelmingly passing a reauthorization of the federal law that governs career and technical education, just six years late. The topic has long been a top priority for Rep. Virginia Foxx, the Republican chair of the House Education and the Workforce Committee, and the Trump Administration, notably presidential daughter and top adviser Ivanka Trump.

DeVos, after signaling in 2017 that she would change the rules governing how K-12 schools and colleges handle allegations of sexual assault and harassment to put more emphasis on the rights of the accused, released her formal proposal in November.

They’re a big change from a “Dear Colleague” letter the Obama administration sent in 2011 urging schools to take a more active role in investigating assaults. Primarily, the new rules would require schools to use higher evidentiary standards to prove an assault occurred and put limits on when schools must act.

The rules would apply slightly differently to higher ed and K-12, for example, requiring reports to any K-12 teacher to trigger a school response, while colleges would have to react only when certain administrators are told of an assault or harassment.

Women’s groups immediately panned the rules and vowed to mount aggressive campaigns to encourage public comment during the allotted 60 days to do so. A lawsuit once the rule is finalized isn’t out of the question either, they said.

This one’s for the wonkiest of education policy nerds out there, the subcommittee watchers and committee-report readers. (You know who you are.) Congress for the first time in a decade passed a full year’s worth of Education Department funding on time.

The bill provides more funding for school safety, rolls back long-standing bans on using federal dollars for school desegregation efforts, and, for the second year in a row, totally bypassed the Trump administration’s requests to create new school choice programs and eliminate long-standing education programs. It also contains a provision requiring a Government Accountability Office study of the state of America’s school infrastructure, the first since 1995.