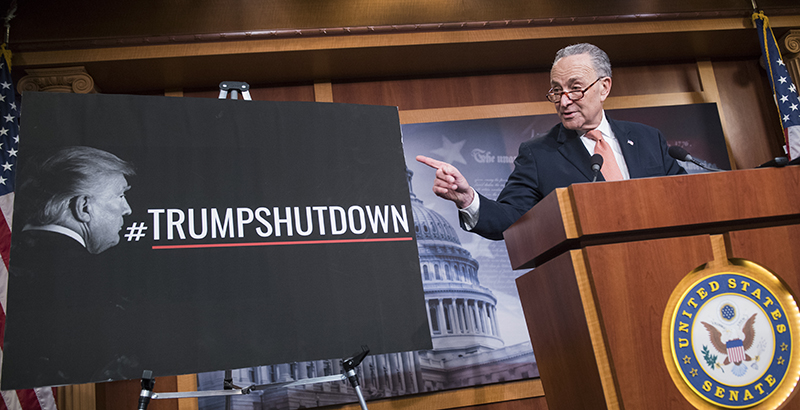 Senate Minority Leader Charles Schumer, D-N.Y., conducts a news conference in the Capitol as Congress works on a solution to end the government shutdown, which he blames Republicans, on January 20, 2018. (Photo credit: Tom Williams/CQ Roll Call)

Update, 6:15 p.m.: The House voted 266-150 Monday evening to pass the bill to reopen the federal government. The Senate voted 81-18 earlier in the afternoon to pass the bill. Most House Democrats voted against the bill; Democratic Whip Steny Hoyer panned the bill for failing to address long-term government funding or the DACA program. Senate Majority Leader Mitch McConnell earlier in the afternoon said ending the shutdown will allow stalled negotiations on those larger issues to resume. “Whether they bear fruit is up to all of us,” he said.

After three days of closure, the Senate voted Monday to re-open the federal government for three weeks, pushing off sticky immigration issues until next month.

The bill funds the government through Feb. 8 and reauthorizes the Children’s Health Insurance Program for six years. Senators voted 81-18 to limit debate on the bill, a procedural step before final passage; it was expected to pass the Senate and House later in the day.

A bipartisan group of senators will continue to work out a larger funding deal and a bill to provide legal status to the so-called Dreamers, young people brought to the country illegally as young children. If no deal is reached by Feb. 8, the Senate will have a “free and open debate” on the issue, Minority Leader Chuck Schumer said ahead of the vote.

Gillibrand said on Twitter that Dreamers “deserve better from the elected leaders of the only country many of them have ever called home” and said that while she wanted to re-open the government, this bill “fails to fix the moral issue we must solve.”

The government shutdown shuttered most of the Education Department, and prolonged closures have big impacts on Impact Aid schools and, depending on the date, Head Start preschool programs for low-income children.

The Trump administration in September ended legal protections for the Dreamers as of March 5, though a federal court has ruled that the administration must continue accepting applications. Continuing the DACA program has been a top priority for education advocates for months.

“There is a real pathway to get a [DACA] bill on the floor and through the full Senate,” Schumer said, adding that he knew the deal wouldn’t satisfy all his colleagues.

There were, however, no guarantees that whatever passes the Senate on DACA would be considered — much less agreed to — by House Republicans or President Trump.

“Those who voted in favor of a continuing resolution based on the promise of a future immigration vote put their faith in the hands of those who have proven themselves unreliable in the past,” Marielena Hincapie, executive director of the National Immigration Law Center, said on Twitter. “Our communities need more than bold gestures and empty promises. We need action right now,” she added.

.@MarielenaNILC: "Today, although the government is reopening, senators have done nothing to address the Trump-created crisis that leaves hundreds of thousands of immigrant youth at imminent threat for deportation." 2/ #DreamActNow

.@MarielenaNILC: "The #Trump agenda, which Speaker Ryan and Majority Leader McConnell have doggedly enacted, is built on misdirection and xenophobia, not forthrightness and compromise." 4/ #DreamActNow

Three former Homeland Security secretaries warned Congress last week that a failure to reach a deal by Jan. 19 could cause a lapse in protections for DACA recipients, even if a final deal is reached, simply because it takes so long to process DACA applications.

After the Shutdown: Why DACA Architect Janet Napolitano Says It May Already Be Too Late For ‘Dreamer’ Students & Teachers