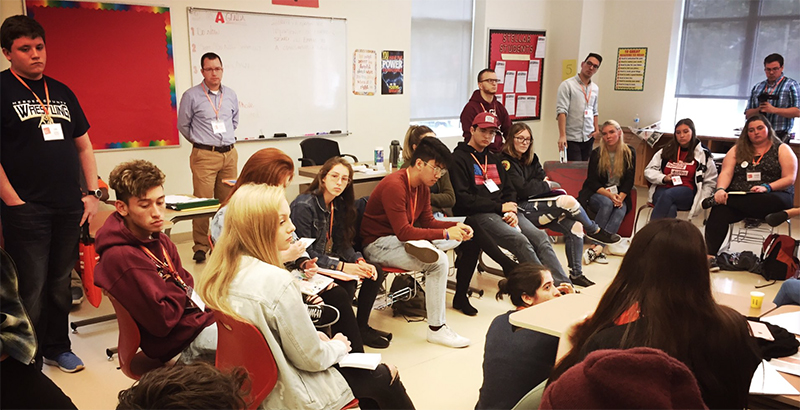 Update, Oct. 23: The roundtable discussion in Texas between gun rights advocates and student organizers is being organized, but has not yet happened.

Eight months of student activism around gun violence swelled to a new peak this weekend, when about 100 students came together in the nation’s capital to draft and ratify a Students’ Bill of Rights for School Safety calling for better mental health care in schools and a slate of new gun control laws.

“When you experience gun violence, there’s a certain obligation within you, I think, to do something,” Jack McLeod, a senior at Marjory Stoneman Douglas High School and one of the student leaders of the conference, said Saturday morning. The conference stretched over three days, including a day of education sessions and smaller working groups at Dunbar High School in Washington, D.C.

Most of the students who spoke with The 74 had some sort of personal connection to gun violence, either experiencing a mass shooting or losing a loved one in a shooting death. Most also said they didn’t immediately join the gun control movement but were inspired by the Stoneman Douglas students.

Student activism on the issue has surged in the wake of the February shooting at Stoneman Douglas in Parkland, Florida, that left 17 dead. In the months following, student leaders organized a national school walkout and the March for Our Lives in Washington to remember the victims of mass shootings and to call for reforms to gun policy.

Walkout Highlights, Coast to Coast: Recapping the Student Protests and the Sights and Sounds That Helped #Enough Trend on Social Media

Despite the political polarization surrounding the issue of gun control, students who spoke with The 74 on Saturday, ahead of the ratification of the final bill of rights on Sunday, said they were optimistic that their message was getting through to conservatives and others who may not be receptive to gun control.

It’s not a Republican or Democratic issue, but a “human issue,” Sydney Chen, 15, of northern Virginia, told The 74.

Educating skeptical adults is a key part of the process, the students said.

“When they actually know what we’re talking about, they know we’re not trying to take away guns,” said Briana Spainhour, 18, a D.C. college student from California. She cited, for instance, widespread support for taking firearms away from those convicted of domestic violence.

The View From Inside Saturday’s March For Our Lives: Students Demand a Revolution in Gun Control — and Lead a Deafening Moment of Silence — in Washington, D.C.

Protesters show up at the students’ rallies with guns, he said. But he’s optimistic that they’re making progress, citing plans for a roundtable discussion student advocates will host with a group called Open Carry Texas.

The students’ final 15-point bill of rights does call for some gun control reforms that have broad support, like taking guns away from domestic abusers and requiring universal background checks. Others, like instituting a 10-day waiting period for firearm purchases, requiring gun licenses akin to a driver’s license, or increasing the minimum age to purchase weapons from 18 to 21, are more contentious.

Lily Eskelsen García, president of the National Education Association, the country’s largest teachers union and one of the sponsors of the event, said the students’ activism shouldn’t be seen as something remarkable.

“You are the legacy of civil rights champions who did not wait for someone to save them. They organized. They had leaders who came together, ordinary people who did extraordinary things for their times. These are extraordinary times. What you’re doing is saying this thing that seems so special, shouldn’t be special. It should be what we do every day,” she told the students Saturday morning.