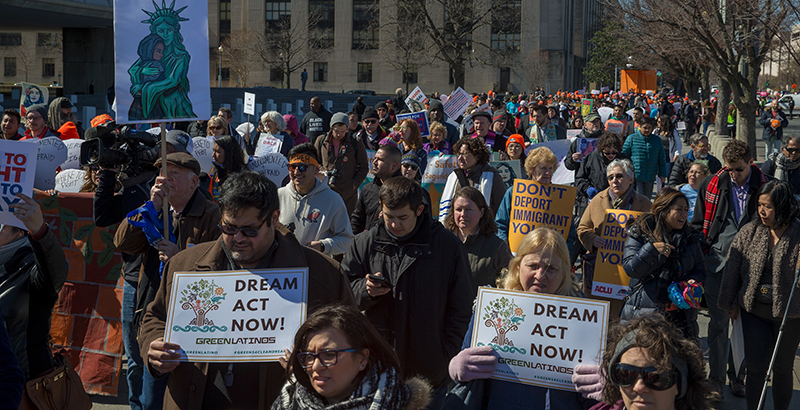 When a Ninth Circuit Court of Appeals panel last week rebuked the Trump administration’s efforts to end the Deferred Action for Childhood Arrivals (DACA) program, it highlighted the life of Dulce Garcia, who it said “embodies the American dream.”

As with a lot of Dreamers, as DACA recipients are often called, Garcia’s American story began when she was just 4 years old. As an undocumented immigrant child in California, Garcia faced abject poverty and homelessness. Still, she thrived in school, and, after putting herself through college, she became an attorney. Now, Garcia represents DACA recipients — including a middle school teacher — in a lawsuit against the Trump administration to keep the program alive.

“Though the United States of America is the only home she has ever known, Dulce Garcia is an undocumented immigrant,” Judge Kim McLane Wardlaw wrote in the court opinion. The government created DACA, she noted, because it recognized “the cruelty and wastefulness of deporting productive young people to countries with which they have no ties.”

Last Thursday, the Ninth Circuit cited Garcia’s story in its opinion to uphold a nationwide injunction on the Trump administration’s decision to end the DACA program, which provides deportation relief and work authorization to roughly 700,000 people — including thousands of teachers and K-12 students — who were brought to the U.S. illegally as young children.

The Trump administration announced in fall 2017 it would wind down the DACA program, created by then-President Barack Obama in 2012 through an executive order after Congress failed to pass immigration reform. In announcing the change, then-Attorney General Jeff Sessions called DACA an “open-ended circumvention of immigration laws” created by an unconstitutional executive order.

Even though the latest court opinion was an incremental victory for Dreamers like Garcia, their fate continues to hang in the balance. The ruling is the latest in a string of court opinions siding with Dreamers, but the Justice Department has already turned to the Supreme Court, and its newly fortified conservative majority, for help. Even before the Ninth Circuit released its opinion, the Trump administration had asked the nation’s highest court to weigh in on three pending lawsuits. In February, the Supreme Court rejected another request by the Trump administration to leapfrog lower federal courts.

The injunction, which allows current DACA recipients to submit renewal applications, was put in place in January by a lower federal court until lawsuits against the Trump administration work their way through the courts. Along with the plaintiffs represented by Garcia, the Trump administration faces lawsuits from the State of California and the University of California system whose president, Janet Napolitano, signed off on DACA as Obama’s Homeland Security secretary. In its opinion on Thursday, the Ninth Circuit panel noted the plaintiffs have some “likelihood of success” in their argument that the Trump administration’s decision to end DACA violates the Constitution’s equal protection clause.

Beyond California, U.S. district courts in New York and the District of Columbia have placed similar injunctions on the move to end DACA. And in a surprising move, a federal judge in Texas sided with Dreamers in August after a coalition of seven conservative states sued to end DACA.

Last week’s Ninth Circuit opinion brings the issue closer to the Supreme Court, however, since it’s the first time a federal appeals court has weighed in on the issue. As Dara Lind notes in Vox, the Supreme Court could move to settle the DACA debate by June.