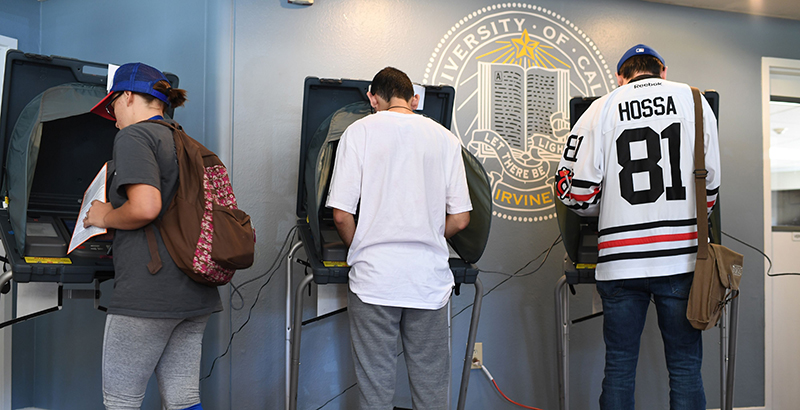 In the months that followed February’s mass school shooting in Parkland, Florida, student survivors launched a large-scale campaign to encourage youth voter turnout — and to knock pro-gun lawmakers out of power.

The success of those young people on Election Day, however, is open to debate. Although Parkland activists played a role in encouraging a surge in youth voter turnout on Tuesday, their central issue — gun control — didn’t fare well, including in Florida.

About 31 percent of Americans between the ages of 18 and 29 voted in the midterm elections on Tuesday — an impressive 10-percentage-point jump from the previous midterm elections, in 2014, according to a post-election analysis by the Center for Information and Research on Civic Learning and Engagement (CIRCLE) at Tufts University. And while a majority of Americans in this age group still chose to stay home on Election Day, the results are significant compared with turnout in previous years. Youth voter turnout was higher on Tuesday than it has been in any midterm election over the past two decades.

Then the mass school shooting in Parkland unfolded in February. The movement to encourage youth civic engagement followed and, though it centered on gun violence, Kawashima-Ginsberg said it opened the doors for a lot of other stakeholders.

“It’s not so much about the issue” of gun control, she said, “but it’s about politicizing young people.”

The surge in youth turnout proved particularly advantageous for Democratic House of Representatives candidates, according to exit polls. Among youth voters, two-thirds voted for Democratic candidates in the House — a margin the CIRCLE analysis said “almost certainly helped the Democratic Party take control.”

Beyond their influence on the House, young people cast decisive ballots in several state races, the CIRCLE analysis found. That includes Wisconsin’s gubernatorial election, where Democrat Tony Evers ousted Republican incumbent Scott Walker by a margin of just 1.2 percentage points. Young voters favored Evers by a 23-percentage-point margin, according to CIRCLE. In Montana, young people made up an above-average share of the electorate — a fact that likely changed the election outcome, CIRCLE found. Democratic Sen. Jon Tester won his re-election in a close contest, with young voters supporting him over Republican challenger Matt Rosendale by a 40-percentage-point margin.

While Democrats’ success in taking back the House will likely be a boon for those who support stricter firearms laws, gun rights advocates also found success Tuesday. Students activists had hoped to force out lawmakers backed by the National Rifle Association, but that didn’t materialize.

One day after Americans voted in midterm elections where gun control became a divisive issue, a gunman opened fire on a bar in California and killed 12 people.

The Trace, a nonprofit news website that focuses on guns in America, created a Twitter bot that tracks campaign spending by the National Rifle Association. As of Thursday, the bot found that an overwhelming majority of NRA-backed congressional candidates won: 106 were victorious, while 38 were not.

Still, groups that back gun control also had victories. For example, 88 of 129 candidates backed by the gun control group Giffords won their races.

In their home state, Parkland activists faced resounding defeat, with pro-gun candidates for governor and the U.S. Senate coming out victorious. In true Florida fashion, however, each race faces a recount.

“Once again, NRA members and Second Amendment supporters made a difference by showing up to the polls and voting,” Chris Cox, the National Rifle Association Political Victory Fund chairman, said in a media release. “Florida voters rejected the extreme gun control agenda” backed by former New York City mayor and potential presidential candidate Michael Bloomberg “and sent a clear message in support of our Second Amendment right to self-defense.”

Still, Kawashima-Ginsberg said youth voters shouldn’t be discouraged by the outcome, because “it’s impossible to imagine that you can suddenly change the entire electorate by motivating the youngest of the voters.” She said she hopes young people play the “long game” and continue to be civically engaged.

For some outspoken Parkland activists, that appears to be the plan.

“Things didn’t necessarily go our way, but we know that this is the start, that it’s going to be a long road,” Parkland shooting survivor and activist David Hogg told the New York Times. “The Florida elections were very close, which is encouraging. For us, the loss in Florida is a call to action.”