Career and Technical Ed Should Be ‘Plan A,’ Foxx Says as House Takes Up Perkins Bill Today 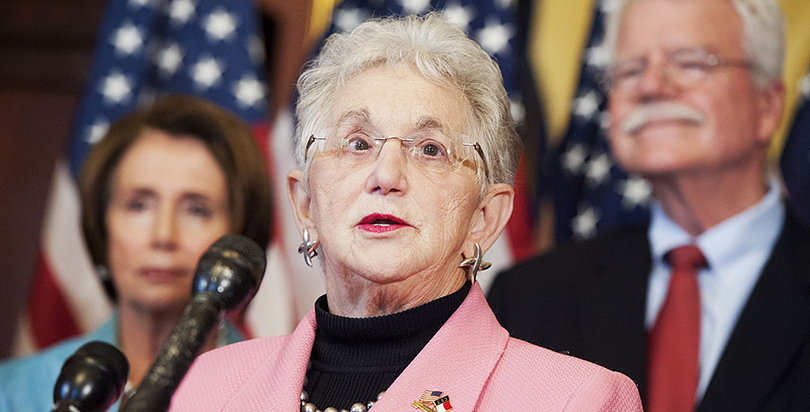 Washington, D.C.
The stigma and challenges surrounding career and technical education are personal for U.S. Rep. Virginia Foxx.
Foxx’s brother, Butch, eight years her junior, didn’t want to go to college but was afraid of disappointing his family, Foxx said during a speech Tuesday at the American Enterprise Institute. She ended up helping set up a training program, and Foxx’s brother, along with a few others, graduated with a journeyman’s license in carpentry, leading to a successful career.
“I want folks to know that even though you can get a degree, you may not be a success, but many people who don’t have degrees don’t feel successful, and that’s not a good thing in our culture,” said Foxx, a North Carolina Republican and chair of the House Education and the Workforce Committee.
Foxx’s Education and the Workforce Committee will mark up a reauthorization of the Perkins Act, the primary federal program governing career and technical education, Wednesday. The federal government spends about $1.1 billion annually on grants to support CTE programs.
Her comments echoed those of TV host Mike Rowe, who told Foxx’s committee earlier this year that the push to enroll more students in four-year colleges has stigmatized apprenticeships and other post–high school career education.
(The 74: ‘Dirty Jobs’ Star Mike Rowe Stumps for Career and Tech Ed as House Readies for New CTE Bill)
Andy Smarick, a fellow at AEI who posed questions to Foxx after her prepared remarks, asked the audience to raise their hands if they had a bachelor’s degree or higher. Most of the 60 or so attendees did.
“Most of the people doing education policy, thinking about what it means to be successful post-secondary, they went to a four-year college or beyond, and they think that is the path to success,” he said.
CTE programs are helping countless Americans acquire the knowledge and skills they need to build fulfilling careers, Foxx said. Nearly 53 percent of public high school students graduated with at least three CTE credits in 2009, the latest year for which numbers were available, and some 22 million undergraduates were enrolled in some kind of post–high school career or technical education program in 2011–12, according to the National Center for Education Statistics.
“In order for these people to thrive, we must do everything we can to change the way people think about CTE, shifting the narrative from a Plan B option to a Plan A option,” she added.
The bill the committee will consider and possibly amend tomorrow is “nearly identical” to legislation that passed the House 405-5 last year but stalled in the Senate, Foxx said. It was reportedly blocked over a fight with the Obama administration over implementing the Every Student Succeeds Act, the federal K-12 education law.
(The 74: Career and Tech Ed for the Modern Age: 3 Things to Know About the New Federal Proposal)
As compared to the current law, which was last reauthorized more than a decade ago, the bill requires better alignment to local employers’ needs, reduces federal reporting requirements, and limits the Education Department’s role in dictating specifics of CTE programs.
Foxx was clear that she believes the federal government has no role in education.
“If God put me in charge for a short period of time, I would go back to the Constitution and I would get rid of the federal government in education, but that’s not going to happen. The next best thing for us to do is spend hardworking taxpayers’ money as well as we can possibly spend it,” she said.
For CTE, that means requiring programs to have “clear mission statements, clear objectives, and measureable objectives,” she said.
Employers will also have a greater role to play, both in ensuring that programs are educating students for existing jobs and telling Congress if the new law doesn’t work, she said.
Foxx said she doesn’t have a crystal ball to predict when or how the legislation will move in the upper chamber, but “I’m hoping very much we’ll find a champion in the Senate.”
Submit a Letter to the Editor
May 16, 2017