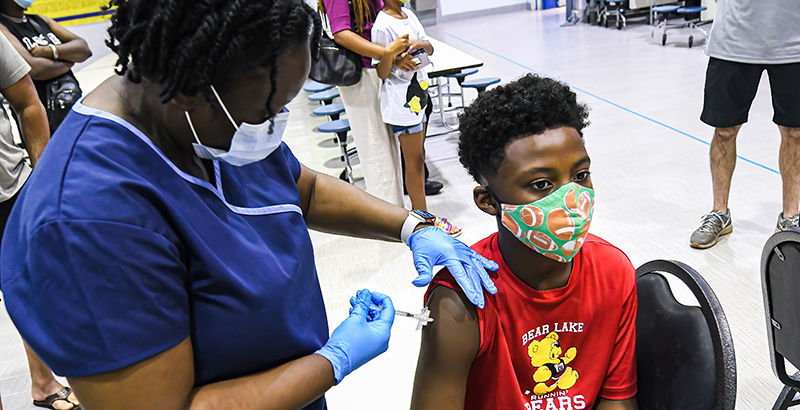 Culver City Unified, a 7,000-student district on the outskirts of Los Angeles, is requiring all eligible students and staff attending in-person school to vaccinate themselves against the coronavirus — the first public school system in the nation to do so amid a surge of cases due to the Delta variant.

In an Aug. 17 email to parents, Culver City Superintendent Quoc Tran announced that students would need to show proof of immunization by Nov. 19. Families who fail to comply by that date will have to enroll their children in a remote learning alternative called independent study, EdSource reported.

Dorit Reiss, vaccine policy expert and professor of law at University of California, Hastings, and Dennis Roche, co-founder of the website Burbio, which has tracked school policy throughout the pandemic, told The 74 that they were not aware of any other school district in the nation mandating COVID vaccinations for students.

The decision, CCUSD spokesperson Geoff Maleman told The 74, was primarily motivated by concerns for student and staff safety due to the Delta surge.

“Our goal, obviously, was not just to be the first. It was really to make sure that we kept our staff and students as safe as we possibly could,” Maleman said.

While health experts agree that vaccines deliver strong protection against COVID-19, including the Delta variant, research indicates that coronavirus shots need not be a prerequisite to schools reopening safely, provided that mitigation measures such as universal masking, 3-foot distancing and adequate ventilation are followed.

Underscoring the shifting ground nationally on the subject of vaccinations, New York City Mayor Bill de Blasio announced Friday that high school student athletes and coaches participating in high-risk sports will have to be vaccinated in order to play, meaning some 20,000 individuals will have to receive at least one dose by the first day of competition.

In Culver City, Reiss thinks the district’s legal grounding may prove shaky: The list of immunizations required for public school enrollment is determined at the state level, she said, and is typically not left for individual districts to decide. Across California, teachers are required to get immunized against the coronavirus or submit to weekly testing. The school system will likely argue that the vaccines mandated by the state represent a floor, not a ceiling, for districts’ immunization requirements, she said, but California’s long-standing precedent of dictating vaccine policy statewide may weaken their claim.

“They’re taking a legal risk here,” the law professor told The 74. “I would be surprised if there’s no lawsuit.”

Maleman, acknowledging “this is a divisive issue,” said that the decision to require students get the COVID-19 shot was vetted by the district’s legal team.

Community members in the southern California district, Maleman points out, have largely supported the vaccination rule. Superintendent Tran estimated that some 1 in 20 district parents oppose the mandate, the Los Angeles Times reported. In response to a post announcing the policy on the district’s Facebook page, the vast majority of comments voiced support for the rule.

“Seeing this makes me feel so proud of being a Culver City alumni,” one Facebook user wrote.

Currently, individuals 12 years old and up are eligible to receive coronavirus inoculations. Children aged 5 to 11 may be authorized for shots as early as the end of this year, according to national health officials.

Over the summer, COVID-19 case rates in adolescents nationwide have seen a nearly five-fold uptick, from 3.4 cases per 100,000 12- to 15-year olds in June to 14.6 cases per 100,000 in August, according to data from the Centers for Disease Control and Prevention. Under 1 in 3 adolescents are fully vaccinated, while the same is true for 43 percent of older teens.

Outside California, states including Washington, Connecticut and Oregon have also enacted rules requiring educators to receive vaccinations or be tested regularly — in some cases threatening that teachers who refuse could be fired. Other states are mulling similar teacher immunization mandates. In the realm of higher education, more than 600 public and private colleges across the U.S., including the 23-campus California State University system, mandate that students returning to campus this fall must receive the COVID vaccine.

“We’re the first but hopefully we’re not the last,” he said.