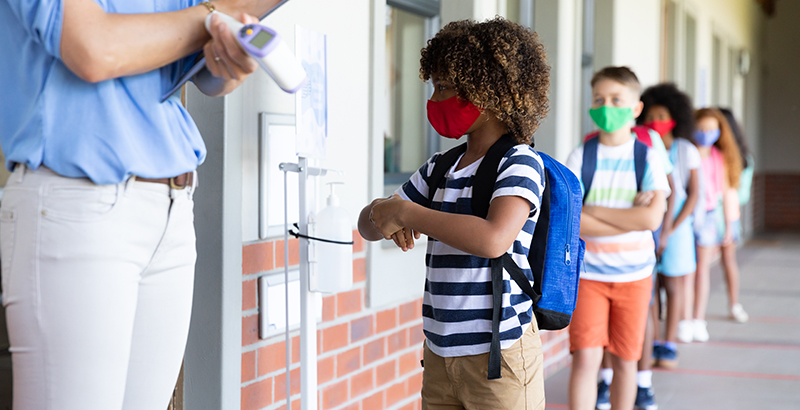 The highly contagious Delta COVID variant quickly spreading through the U.S. may force schools to double down on mitigation measures in order to reopen safely later this summer and into the fall, health experts say.

It’s “one of the most dangerous time periods [in the pandemic] for people who aren’t vaccinated,” Taylor Nelson, a University of Missouri medical doctor specializing in infectious disease, told The 74. That includes large numbers of young people, she said.

The Delta variant now accounts for about 20 percent of all new U.S. cases, up from about 10 percent two weeks ago, and has led to surges in youth infections abroad.

In England, where the academic year runs until mid-July, a quarter of a million children missed school last week due to testing positive for the virus, self-isolation or school closures — marking the most disrupted week of learning since the country fully reopened classrooms in March.

Israel, which has led all countries in its vaccination push but has only immunized 2 to 4 percent of 12- to 15-year-olds, saw the number of COVID patients in its education system triple in the past week.

People who have received both vaccine doses have a high level of protection against the new mutation, doctors say. But because youth under 12 are not yet eligible to receive COVID shots, and with immunization rates lagging among adolescents, Joshua Petrie, professor of epidemiology at the University of Michigan, worries that the rise of the Delta variant could elevate the risk for unvaccinated youth.

“Kids are probably the group now that are most susceptible to infection,” he told The 74.

The Food and Drug Administration is expected to expand their emergency use authorization of COVID-19 vaccines to children in the fall of 2021 or early in 2022.

In a revision to masking guidelines, spread of the Delta variant spurred Los Angeles County — as well as the World Health Organization — to recommend that all people, regardless of vaccination status, wear face coverings in indoor spaces. The Centers for Disease Control and Prevention, on the other hand, when asked about the WHO’s shift in stance, provided no indication of changes to their current guidance, which says fully vaccinated people can go mask-free.

Concern stems in part from new reports out of Israel that about half of adults infected in a Delta variant outbreak were fully vaccinated with the Pfizer-BioNTech vaccine, prompting the government to reimpose sanctions to stop the virus’s spread, including the return of masking requirements.

Even as fears mount, in-person classes should be a priority next year, says Robin Lake, director of the University of Washington’s Center on Reinventing Public Education. Remote learning often meant fewer hours of live instruction with teachers and spurred severe learning deficits.

“We have got to get kids back in school as soon as possible,” Lake wrote in an email to The 74.

To keep young people safe when the school year resumes this fall, Petrie anticipates that the now-familiar safety protocols employed throughout 2020-21 may be necessary, despite the fact that many states and districts scrapped their mask mandates in May and June.

“All the tools that we’ve been using over the past year and a half [such as masking and ventilation] would still be available,” said the infectious disease expert, while stressing that local levels of community spread would determine exactly what mitigation measures would be appropriate.

“Even though we’re all dealing with pandemic fatigue, this is not the time to relax,” Nelson added.

The Delta variant, which is 60 percent more transmissible than the U.K.-originated Alpha strain, has quickly taken hold in pockets of the U.S. where smaller shares of the population have received COVID shots. Scientists fear that a recently identified further mutation, dubbed “Delta plus,” could be even more infectious than the original. There is minimal evidence, however, that Delta cases are more severe than infections from other strains.

“It spreads like wildfire in places where you have fewer people vaccinated,” said the University of Missouri doctor.

In the southern portion of her state, where fewer shares of individuals have been immunized against COVID-19, the Delta variant is thought to be the driver behind a six-fold increase in hospitalizations at one health center. In Colorado, after an outbreak in Mesa County, health experts estimate that now more than half of all active coronavirus cases in the state are caused by the Delta variant. More than 90 percent of the individuals getting sick are not known to have received any vaccine before their hospitalization, the Colorado Department of Public Health and Environment reports.

Alarming transmission rates have prompted the Biden administration to step up its efforts to raise COVID vaccination rates among teens, after acknowledging last week that the country would likely miss his goal of 70 percent vaccination among eligible populations by July 4.

But regardless of local context, Nelson’s message to parents is that the best way to protect their kids — at least those who are eligible for shots — is to get the vaccine.

“Unfortunately, I don’t know that we’re at the end of this [pandemic], so the more immunity you give your kid the better,” she advised.