The Governor’s Gambit: Trading Vaccines for School Reopenings Mostly Worked for DeWine, But There Are Holdouts 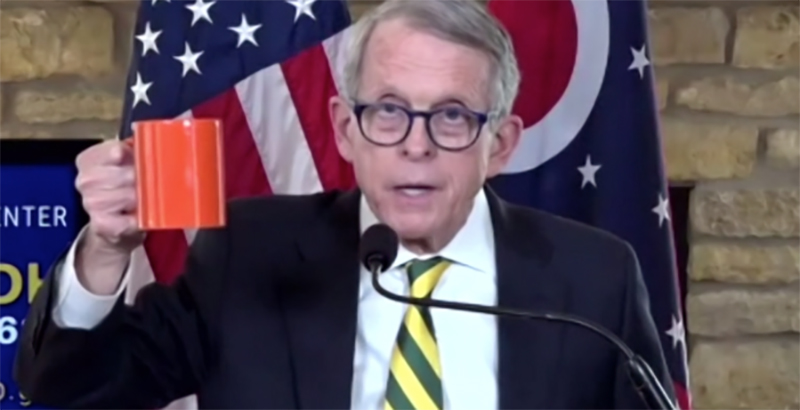 Ohio Gov. Mike DeWine holds up a mug to emphasize his claim at a recent press conference that his plan of vaccinating teachers to encourage school reopenings is working. “I look at the cup or the glass as 95% full,” he said. “And we’ve got about 95% of these kids back in school.” (The Ohio Channel)

Gov. Mike DeWine’s strategy to reopen Ohio’s schools by offering teachers and other staff early vaccines in return for going back to class has largely succeeded.

With enough schools reopening by March 1 so that more than 90 percent of Ohio’s students can attend in-person class at least part-time, DeWine seems to have hit a home run.

But there are a few notable holdouts that still aren’t keeping their end of the bargain even after taking vaccines ahead of many seniors and people with medical conditions — including Cleveland and Columbus school districts, and even a charter school with DeWine family connections.

Though DeWine attracted national attention last month after threatening to yank vaccines from districts that weren’t even trying to meet his March 1 deadline, it turns out the governor doesn’t have the power to do much more, at least not quickly enough to matter, experts say.

It’s a similar limit to what President Joe Biden faces, as he too urges schools to reopen. That power, experts say, rests mostly with local school boards, who don’t have to follow top-down orders, but can weigh local safety issues, parent concerns and relationships with unions in making their own reopening decisions.

Though DeWine can offer vaccines as a carrot to encourage schools to open, a tactic Biden is now urging states to try, there’s no stick to enforce it.

Nancy Hollister, who served as Ohio’s Lt. Governor in the late 1990s and briefly as Governor, said states give governors broad power in some areas, but not in education.

“Their words have weight and their words have meaning and people pay attention,” said Hollister, who also served on Ohio’s state school board from 2016 to 2019. “But it doesn’t go any farther than that.“

She added: “There’s no clear cut rule that says I have a magic wand and I’m going to turn you into a toad if you don’t do this.”

DeWine’s tight timeline to reopen schools has drawn much of the resistance. Cleveland remains in a high risk area for COVID spread, according to the Centers for Disease Control and Prevention, so extensive safety measures are recommended to open middle schools and high schools. Columbus remained in that category until recently.

Worries about whether teachers should have to return before receiving both doses of COVID vaccine added to delays. Most school staff statewide, and all of Cleveland’s, only had a first shot by March 1. Critics of DeWine have said waiting a few more weeks to fully vaccinate staff won’t hurt.

Today, 10 days after DeWine’s deadline, Cleveland still hasn’t reopened schools after battling with its teachers union over safety concerns. Teachers refused to come to schools to set up classrooms Monday because safety measures were not complete, threatening to stay out until they were.

Though those issues were resolved after a meeting with the union, American Federation of Teachers President Randi Weingarten, and Cleveland’s mayor, it will still be late in the month before most students return to school.

Columbus is working through staffing and bus shortages before middle school and high school students can return later this month. And Village Preparatory School – Willard, a Cleveland charter school where Mark DeWine, one of the governor’s sons, is an administrator, has some students in schools now, but most won’t be back until April.

“Kids have been out for a year now,” he said on a visit to Cleveland-area vaccination centers Friday. “It’s time for the Cleveland city children to be back to school in person.”

Even as he prods holdouts to open, DeWine’s strategy has mostly worked. DeWine noted that when he offered schools a trade in January of vaccines for a pledge to reopen by March 1, half of Ohio’s students were locked out of schools and had to take classes only online. By March 1, after school staff statewide had received at least one vaccine, enough schools reopened so that fewer than 10 percent of students were shut out of school buildings.

“The program has been successful,” DeWine said. “The fact that some schools might miss this by a few days is not good, but I think we need to keep our eye on the ball. The glass is about 95 percent full and we should not fixate on the five percent.”

Of Ohio’s 609 school districts, all but eight were offering students a chance to come back to schools, at least a couple days per week by March 1. And that number keeps dropping. After criticism from DeWine, Akron schools brought back kindergarten through second grade students Monday, a week ahead of schedule.

Some of the earliest pushback to DeWine came from Columbus, whose superintendent and school board president set a reopening plan even before the governor offered vaccines. They have largely stuck to that plan, bringing back kindergarten through fifth grade students to school in a hybrid plan on February 1, and planning to bring older students back starting next week.

But reopening hasn’t been smooth. After trying to reopen, the district had to shift four elementary schools back to remote classes after too many teachers took sick days, family or medical leave.

That’s despite DeWine saying publicly the March 1 deadline was not flexible.

Since DeWine threatened to stop vaccinations Feb. 12, the district has crept toward bringing students back. Gordon set a plan to gradually open starting March 1, then bumped opening to the week of the 8th, delaying the return of most students until late in the month.

DeWine had said he was “disappointed” by that delay.

On top of that, the Cleveland Teachers Union last Thursday voted not to return to schools on the 8th and beyond because safety measures, including personal protective equipment, student distancing, and ventilation, were not in place. Obrenski called the reopening a “rush job fueled by political expediency, not sound science.”

By Monday, the district and union had resolved their differences and jointly declared schools ready for students.

The delays with Mark DeWine’s school are a little more complicated. The school is part of the highly-regarded Breakthrough Schools network of charter schools which are all delaying the kind of return DeWine seeks — a chance for all students to be in classrooms with teachers — until early April.

But even though Breakthrough has had remote classes all year, it opened learning centers, sometimes called pods or hubs, allowing students to come to school every day to take online classes supervised by non-teaching staff.

John Zitzner, one of Breakthrough’s co-founders, said he considers that a form of hybrid classes that meets some of what DeWine seeks, if not all.

“I think we did meet it in many ways, particularly we had kids in the building the whole year,” he said, adding teachers will gradually return in the next few weeks.

Mark DeWine, Breakthrough officials said, had no involvement in how the chain handled reopening. He taught social studies for Breakthrough for six years before becoming Dean of Culture, responsible for school climate at one of 12 Breakthrough schools last summer.

“My focus has been, and will continue to be, on serving and empowering the kids of Cleveland; something that both Breakthrough and my dad also care passionately about,” he said in an email.

Spokesman Dan Tierney said Tuesday that though DeWine talks with his son about education issues, he did not affect his reopening position.