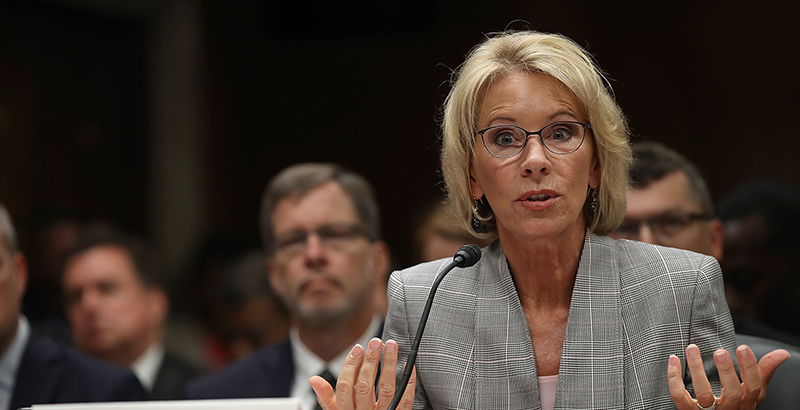 She’s a rare survivor among Trump’s turnover-laden cabinet, despite notching a long list of political and policy stumbles and engendering a degree of vitriol rare for such a low-level cabinet official.

Even by the hyper-partisan standards of Trump-era D.C., DeVos has had a rough go. Her confirmation process kicked off with the famed guns-to-combat-grizzlies gaffe that spawned an SNL skit. She barely squeaked through on a 51-50 vote, becoming the first cabinet appointee in U.S. history to need the backing of a vice president.

The First 100 Days for the New Education Secretary: How DeVos Stacks Up Against Her Predecessors

As she closed out her first 1,000 days, she was again an outlier, becoming the first education secretary to be held in contempt of court. The issue — failing to refund defrauded student borrowers at a now-shuttered for-profit college — is the subject of a House Education Committee hearing next week, and she could be subpoenaed to testify on it.

“Betsy DeVos’s tenure has been disastrous for America’s students, from kindergarten through higher education. She’s a flat-out disaster for public education in America,” Rep. Andy Levin, Democrat of Michigan and vice chair of the House Education and Labor Committee, told The 74.

Even so, her tenure can only be seen through the lens of the nation’s topsy-turvy politics. President Trump, her boss, has given short shrift to the nation’s schools. He last discussed education during a public spat with DeVos over responsibility for a much-maligned proposal to end federal funding for the Special Olympics. And if accounts are to be believed, the president has even bestowed on her one of his signature disparaging nicknames: “Ditzy DeVos.”

“I don’t envy her for having to work in an administration that is so chaotic, from top to bottom, and has not prioritized education as an issue, [and] to be working in a time when Americans tend to view every action taken by a government official through a partisan lens,” said Martin West, a professor at the Harvard Graduate School of Education whom DeVos just appointed to a federal board overseeing the National Assessment of Educational Progress.

The rancor surrounding DeVos, which has necessitated protection from the U.S. Marshal Service expected to cost $26 million over four years, was spurred in no small part by her longtime advocacy for school choice.

Among her earliest and sharpest critics have been teachers unions. Randi Weingarten, president of the American Federation of Teachers, in an emailed statement said DeVos has failed to represent public school students and has blamed teachers and unions for the country’s problems without spending enough time in classrooms.

“After 1,000 days in office, Betsy DeVos has made clear she doesn’t know much about public education, and worse, she doesn’t seem to care,” Weingarten said.

But to DeVos’s supporters, much of this criticism sounds like old-hat union politics. Just because DeVos supports school choice — or, as the secretary more frequently calls it, education freedom — doesn’t mean she downplays public education or hasn’t spent time in public schools, Department Press Secretary Angela Morabito said in an email.

“Secretary DeVos has a strong education freedom agenda, which means she believes every student should have the right to choose the educational pathway that best fits their unique needs,” Morabito wrote. “She is agnostic when it comes to the type of school — charter, traditional, private, online, and so on.”

Those visits aren’t enough to assuage critics, many of whom say DeVos has done relatively little, particularly in K-12. A slow-moving Congress and an intentional departure from federal intervention in local schools is surely part of the reason. But it stands in contrast to predecessors like Arne Duncan and Rod Paige, other first-term education secretaries who were well in the throes of implementing Race to the Top and No Child Left Behind, respectively, in their first 1,000 days.

“At least at the K-12 level, I think she’s been pretty ineffectual…She’s still kind of a symbol that people like to rally against, more than for. I don’t know that she’s had a lot of impact in terms of actual policy,” said Jeffrey Henig, a political science and education professor at Columbia’s Teachers College.

Her tenure since that grizzly introduction has been marked by continued gaffes (see: historically black colleges as “pioneers of school choice,” and that disastrous 60 Minutes interview). Her congressional testimony has more often produced snarky tweets than substantive policy discussions, and a court threw out one of her attempts to overturn an Obama-era rule on race and special education.

Among her most egregious actions, per her detractors, are weak implementation of the Every Student Succeeds Act; lax oversight of civil rights laws (overturning Obama-era discipline guidance, rewriting Title IX sexual harassment rules); and a scaling back of rules on for-profit colleges.

To DeVos’s supporters, of course, those aren’t failures. Weakening the federal hand in education is exactly what they wanted after the perceived overreach of the Bush-Obama years. Sen. Lamar Alexander, chairman of the Senate Health, Education, Labor and Pensions Committee, in an emailed statement praised DeVos for implementing ESSA “well, on time, and as Congress intended — by restoring most decisions back to states and local school districts.”

Morabito cited several other wins during DeVos’s tenure, including a rewrite of the federal career and technical education law, expansion of apprenticeship programs and several changes in higher education.

But those actions aren’t translating to public support: DeVos is routinely ranked among the least popular members of the cabinet, and the Education Department in a recent poll was ranked second from the bottom among federal agencies — just above immigration enforcement.

On her signature issue, DeVos’s rhetoric and advocacy on school choice has been something of a double-edged sword.

The staunchest advocates appreciate the administration’s work, particularly in using the bully pulpit to promote choice programs, said Lindsey Burke, director of the Center for Education Policy at the Heritage Foundation, a conservative think tank.

Looking just at the D.C. Opportunity Scholarship Program, a voucher program for Washington, D.C., that the Obama administration looked to end but which DeVos has enthusiastically embraced, “It’s clear what a 180 it has been on school choice,” Burke said.

Yet DeVos has had few real wins on her signature issue: The department called her a “strong advocate for” a provision in the 2017 tax bill that allows families to use 529 tax-advantaged college savings plans for K-12 expenses. But it also took more than two years to release a federal tax-credit scholarship proposal, and it has been criticized across the political spectrum.

Despite the apparent unpopularity of her proposal, DeVos continues to push for it. On Wednesday, as presidential impeachment hearings began on Capitol Hill, she encouraged attendees at an economic development conference to support her idea.

“America’s antiquated approach to education fails too many students,” she argued. “What we really need is a transformational change in K-12 education.”

The particular flavor of DeVos’s school choice advocacy, one that encompasses private school choice, places her far to the right of many charter advocates, fracturing the precarious left-right coalition that has backed charters and education reform since the No Child Left Behind era, Henig said.

A different set of policies, like one that supported charters but emphasized the need to close low-performing schools, might have held that coalition together, he said.

The Education Department, for its part, said it is “just not the case” that support for choice has weakened during DeVos’s tenure, citing popularity in the states and high support among Democrats, particularly black and Hispanic Democrats, as seen in this year’s EdNext poll.

“Education freedom remains a consensus issue locally,” Morabito said. “The vocal national opponents of education freedom are seeking the endorsement of the teachers union. They are the ones who ought to explain why the issue has suddenly become divisive.”

As Trump’s first term in office winds down, DeVos has managed to hang on despite ongoing controversy. She has become a talking point in elections, including the 2020 Democratic presidential primary: Her actions on for-profit colleges are the focus of a campaign ad, and several candidates pledged to only appoint an education secretary who’s been a teacher.

“She hasn’t managed to avoid being a target,” West said. “Whether it’s reasonable to expect that she could have, I’m not sure.”

Reyna: 9th-Grade Average. FAFSA Completion. College Matching. Some Key Measures for Making Sure Students Are on the Right Track