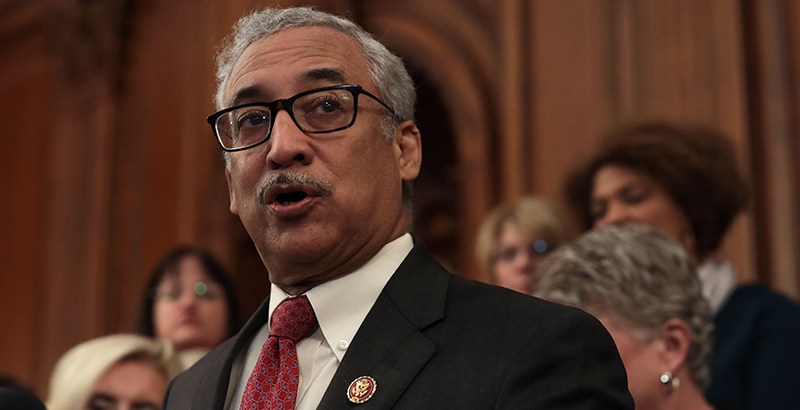 The much-vaunted flexibility of the Every Student Succeeds Act, which gave states greater leeway in how to judge schools’ success and intervene in those that aren’t meeting the mark, has been taken too far, he said.

“ESSA in and of itself is not a silver bullet. The law’s flexibility is not a blank check,” Scott, the chairman of the Education and Labor Committee, told the annual legislative conference of the Council of Chief State School Officers.

Scott, speaking just a day before Education Secretary Betsy DeVos is scheduled to testify in front of his committee, didn’t spare the department, either.

“I remain concerned that the Department of Education is not adequately requiring you to implement the law with fidelity,” he said, citing the department’s approval of plans that he says don’t follow the law and the granting of waivers from the law’s requirements.

“I find it disheartening that we have to repeat the message, but I remain disappointed that states are ignoring subgroup performance,” Scott said. “These programs do not live up to the promise of ESSA.”

Scott didn’t offer any specifics, but civil rights groups have highlighted several states that they say don’t meet ESSA’s requirements, such as Maryland and Florida, which rate schools just based on overall performance while ignoring individual groups, and Massachusetts and Connecticut, which lump several subgroups into one “super-subgroup,” a practice that advocates say masks performance of individual groups.

Congressional Democrats, including Scott, have raised alarms about what they see as improper ESSA implementation since 2017, when Congress blocked Obama-era rules for implementation and the Trump administration took over.

(Republicans and the Education Department have said that states only must consider subgroup performance for “targeted support” designations that help schools where specific groups are underperforming. The law doesn’t require states to use it when creating the ratings system that determine the bottom-performing 5 percent of schools in a state that get “comprehensive support,” they’ve said.)

Beyond the reprimand on student subgroup performance, Scott urged the state chiefs to implement evidence-based solutions to turn around struggling schools, and to be transparent about student outcomes and how resources are allocated.

Though they have very different priorities, members from both chambers and both parties expressed optimism that it can get done.

“We worked together on fixing No Child Left Behind. There’s no reason we can’t update the Higher Education Act,” Sen. Lamar Alexander, chairman of the Senate Health, Education, Labor and Pensions Committee, said of the House and Senate committee leaders.

For Alexander, top priorities include simplifying the federal financial aid application, reducing excessive borrowing and cutting down the number of loan repayment options.

Scott’s goals are affordability, accountability and degree completion, he said. He’ll also focus on strengthening teacher training and support programs in the law, including public service loan forgiveness and TEACH grants that help educators pay for college in exchange for teaching in high-needs schools.

Rep. Virginia Foxx, the top Republican on the House Education and Labor Committee, said she’d like to include much of the Prosper Act, a higher ed rewrite she authored in 2017, but is not optimistic that she can get it all. That bill, which scaled back federal regulations, was widely panned by Democrats and wasn’t considered on the House floor.

Those are widely different priorities even before including those of the Trump administration, and there will be additional land mines in the legislative process, like Title IX rules regarding how schools handle allegations of sexual assault.

Ultimately Scott, as Sen. Patty Murray, the top Democrat on the HELP Committee has before, said Congress can’t waste this opportunity and only make small-scale changes where there is bipartisan agreement.

“The chance to reauthorize HEA only comes about once a decade. We cannot tinker around the edges and risk wasting this chance,” Scott said.