Analysis: Why Those Looking to Reform American Education Will Need More Than Facts on Their Side to Win the 2020 Political Debate 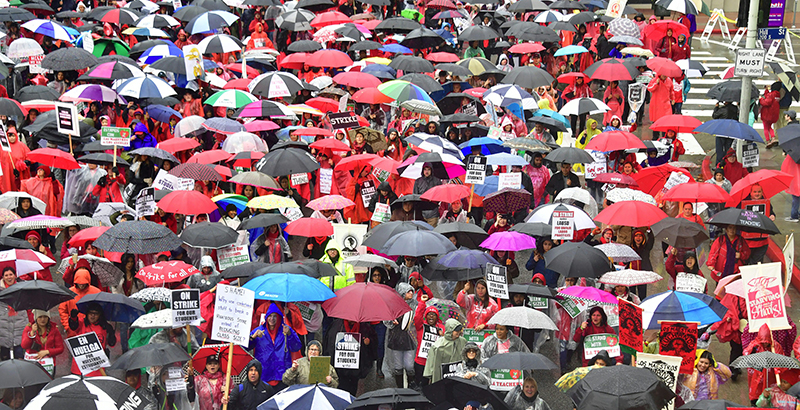 Thousands of teachers march in the rain through Los Angeles on Jan. 14, 2019, the first day of the strike. (Frederic J. Brown/AFP/Getty Images)

In the opening lines of her towering 1967 essay “Truth and Politics,” German (and naturalized American immigrant) philosopher Hannah Arendt sighed, “No one has ever doubted that truth and politics are on rather bad terms with each other, and no one, as far as I know, has ever counted truthfulness among the political virtues.”

You’re nodding your head. Of course you are. The past two years of rancorous American governing have besieged the country’s already fragile hold on truths, facts and (especially) values that we all share. If we’re not sorting through easily disprovable lies about inauguration crowd sizes, we’re being fed deception about immigrant families, the effects of tariffs or the virtues of Vladimir Putin. Obviously truth flounders in politics. That’s like saying that snow and the desert don’t go well together. C’mon, man.

And yet, as the 2020 election cycle begins in earnest, we ought to remember that education politics are subject to these same constraints. What do we do about the fact that many of the obvious truisms in public education are, well, false? Reformers’ general instinct is to shout louder about the facts. When charter schools come under attack, reformers fall back on data showing that these schools perform particularly well with historically underserved children. When reformers like Sen. Cory Booker face criticism for their education records, reformers reassert facts that support the efficacy of reform.

Exclusive: Presidential Candidate Cory Booker Reflects on the School Reforms He Brought to Newark as Mayor and the Education Legacy He’s Left Behind

On the one hand, thank goodness. Public education badly needs folks obsessed with data about how students perform in U.S. schools. America’s kids badly need advocates who are willing to righteously, stubbornly insist on prioritizing those facts over all other things.

And yet, on the other hand, reformers need to be aware that they’re prioritizing. Their truths are not the only truths. That’s the alchemy of how truth and politics come together in persuasive rhetoric: Facts become powerful within a particular framing. Fact-free rhetoric struggles to persuade because humans have eyes, ears and noses. Meanwhile, rhetoric-free facts do not persuade, since they need some sort of context to mean anything.

Take the recent teacher strike in Los Angeles, for instance. It can simultaneously be true that 1) charter schools in Los Angeles are helping children of color succeed, 2) teachers in L.A. (and Oakland, West Virginia, Denver, Oklahoma … basically everywhere) are being squeezed by the deepening inequalities in American life, 3) teachers see their unions as key to protecting their salaries and benefits, 4) the growth of non-unionized charters threatens those unions’ clout and viability, and 5) Los Angeles Unified School District cannot yet account for how it will pay for the improved deal.

All of these things are, to varying degrees, true. And they’re far from the full universe of available truths that are related to the L.A. strike. That’s why there’s limited persuasive value in righteously, stubbornly trumpeting any one or two of these without attending to or acknowledging the others. It’s a reminder of what I warned before the last presidential election: Voters who are concerned with a set of primary issues (in this case: inequality, financial precariousness, etc.) can acknowledge contravening facts (charter students’ performance) without being persuaded to change their positions.

All of this happens within a broader national context. Part of why teacher strikes have become more common — and been met with popular sympathy — is that many Americans share teachers’ deep frustration with middle-class vulnerability. Americans have been living their peak rhetorical stereotype for decades: We’re working harder but not getting ahead. The rules have been so thoroughly tilted toward the rich for so long that voters are hungry for proposals to level the playing field.

That’s why other truths — the district doesn’t know if it can afford to pay teachers better or sustain their benefits — aren’t moving folks right now. In a moment when many Americans are struggling to find a path to a dignified place in the middle class — with affordable housing, health care and retirement — complaints about the “luxuries” of urban teacher contracts are a poor starting place for reformers supposedly fighting for the underprivileged. They’re out of step with urgent concerns of our political moment.

Think of it like this: You’re trying a particular soup for the first time with a friend. You take your first sip, and your mouth is on fire. Holy heck, that’s some spicy soup! You moan to your friend, an education reformer. “Yeah, that spoon is made of metal,” she says. “And the soup’s packed with vitamin C!” No. No, no. NO! Well, yes, it’s made of metal. But it’s not the point right now. The soup is spicy. You need something to drink. Water, but only to buy time while you search for a gallon of milk. This is an emergency! “Look,” your friend says, “that soup was made fresh today. It’s yellow. It contains organic compounds!” You blink through sweaty tears. “What’s more,” she says, “we got here on our bikes!” You expire, cut down by chiles.

So: how might reformers find their footing and advance kids’ best interests in today’s political context? First: There are no magic words to erase our big structural issues. Reformers need to shift their thinking to fit constructively within U.S. politics in 2020.

Obviously, they should zero in on ways that socioeconomic structures in the U.S. act as impediments to equality of educational opportunity. Neighborhood schools reinforce privilege in many communities — any serious movement to lessen inequality needs to intentionally and comprehensively engage this through education, housing and/or transportation policies. Reformers like Booker should hammer at this, at making clear that reform is about making it harder for the rich to buy better public schools inaccessible to the rest of us — just as they shouldn’t be able to wield their wealth to get cleaner air or water.

His 2020 campaign announcement video hints at this by noting his family’s experience with U.S. real estate segregation — an improvement on a similar scene in Hillary Clinton’s launch video from the last cycle.

Reformers might also pay heed to the many structural injustices faced by English learners and/or children of immigrants. In a moment when these children’s families face intense, government-encouraged harassment, education reformers have too often been silent. It’s not enough for reformers to announce that they “stand with immigrants” when Republicans in D.C. wrench thousands of immigrant kids from their asylum-seeking parents. This is a shame, since the ugliness of the administration’s xenophobic immigration agenda has sparked new political energy for doing better by linguistically and culturally diverse kids in U.S. schools. Education reformers should have constructive policy ideas to contribute to newly energized national conversations about how to actually support children of immigrants in U.S. schools. Their inattention has consequences: Over and over, these kids are afterthoughts in new education initiatives.

There’s so much more. Reformers could put more energy into expanding access to high-quality pre-K programs that save working families money and support better outcomes for kids. They could explore ways of lowering tensions between unions and charter schools. They could use the national focus on inequality to push harder to equalize education funding between school districts.

Reformers can fight today’s political tide. They can wish it were not real. But they would do better to show how their priorities align with this national movement to reduce inequality. Their choice of which truths to emphasize in 2020 will do a lot to redefine reformers for an energized, equality-minded public. Are we a movement that opposes unions? That despises school districts? That believes in public education? That supports immigrants? That cares about working families?

They don’t need to provide just one answer or be just one thing. There are plenty of truths to go around. But reformers need a better strategy than resuscitating their old talking points and rounding up the usual opponents. That won’t work in 2020 — and that’s one fact they can count on.