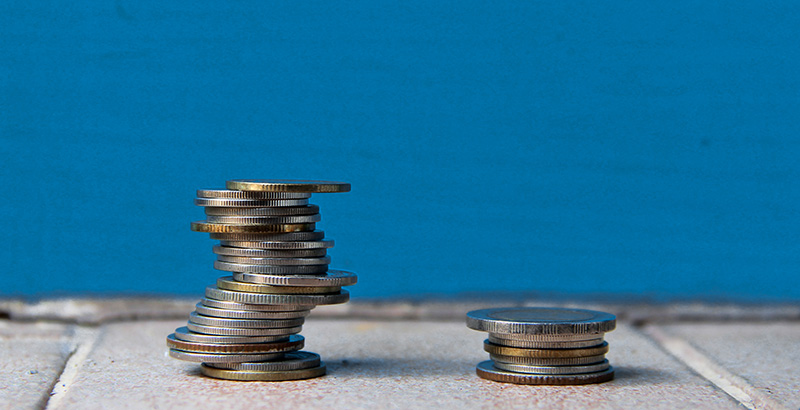 Now, a new report released on Tuesday suggests the state didn’t go far enough. Despite the landmark decision, the state has one of the nation’s largest funding gaps between districts predominantly serving students of color and those where most children are white. When researchers focused on schools serving large shares of low-income children, they found the funding gap between predominantly white and nonwhite schools was starker.

In fact, despite pivotal finance rulings, school funding in New Jersey, California, and New York remains among the most inequitable in the nation according to the new report by EdBuild, a nonprofit think tank that focuses on education spending. Nationally, EdBuild researchers found that school districts that mostly serve nonwhite students get $23 billion less in state and local spending each year than those with predominantly white student populations — even though they educate roughly the same number of children.

That breaks down to about $2,200 per student, affecting roughly 10 million kids. Predominantly nonwhite districts received less funding than majority white districts in 21 states and they received more in 14 states. 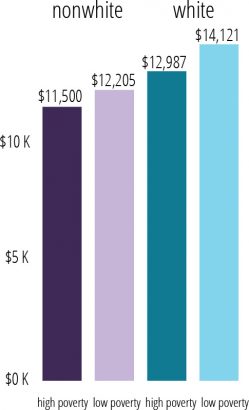 In New Jersey, majority nonwhite districts receive 18 percent less in school funding than predominantly white systems, meaning they get about $3,400 less per student. Meanwhile, predominantly poor white school districts got more than $7,300 more per student than poor districts where most of the students were not white.

From housing policies to local tax structures to revenue generated by businesses to arbitrary school district boundaries that exacerbate inequity, the community where a family resides has a major effect on the quality of schools their children will attend, said Rebecca Sibilia, EdBuild’s founder and CEO. Much of the funding disparities, she said, can be traced back to policies like racial segregation in housing. Exacerbating the problem, according to EdBuild, are “gerrymandered” school district borders that ensure billions of dollars more in education funding are directed to white children.

“School funding is housing policy,” she said. “It is just the new iteration of the vestiges of the mistakes we’ve made in the past.”

Just 34 states are included in the report since some states, like Idaho, lack districts with large shares of nonwhite students, while others, like Connecticut, lack districts where students are predominantly white and low-income.

The EdBuild report, which relies on data from the U.S. Census and Education Department, uses a different methodology than previous studies that analyzed education funding equity, and therefore reaches a slightly different conclusion.

For instance, a report released last year by The Education Trust found that New Jersey offers one of the nation’s most equitable funding structures and provides substantially more money to low-income districts. On a national level, The Education Trust found that districts serving the largest share of nonwhite students received about 13 percent less per child than those serving predominantly white students.

EdBuild’s conclusions rest on some complex statistics. About 20 percent of American children enroll in school districts with a high-poverty, largely nonwhite student body, EdBuild found. Meanwhile, just 5 percent of students enroll in districts where students are predominantly poor and white. Despite these numbers, there are more than six times as many school districts serving predominantly white student populations as those serving mainly black children. Therefore, EdBuild argues, predominantly nonwhite districts don’t have as much political capital to advocate for better conditions.

Advocacy power “is amplified or muted by the sheer size of districts at each end of the size spectrum,” according to the report. “When there are six times more members of a special interest, that special interest is likely to be more effective in the state capitol.”

Policies driving the disparities differ across states and include multiple factors such as local tax structures. But across the board, Sibilia said, geographically large districts tend to have greater funding equity. She said it’s possible that states like New Jersey, which has nearly 600 school districts, could consolidate systems to encourage funding equity.

“A lot of southern states are structured around counties and so they have much bigger and more equitable tax systems,” Sibilia said. “You can smooth out the differences of where people are living versus where they’re shopping, and ultimately both of those equations end up benefiting their kids’ schools.”

Disclosure: The Eli and Edythe Broad Foundation, The Carnegie Corporation of New York, The Bill & Melinda Gates Foundation, and the Walton Family Foundation provide financial support to EdBuild and The 74.