Analysis: Cory Booker Could Have Run Away From School Reform. Instead, He’s Doubling Down on Newark’s Education Revival. That’s a Smart Move 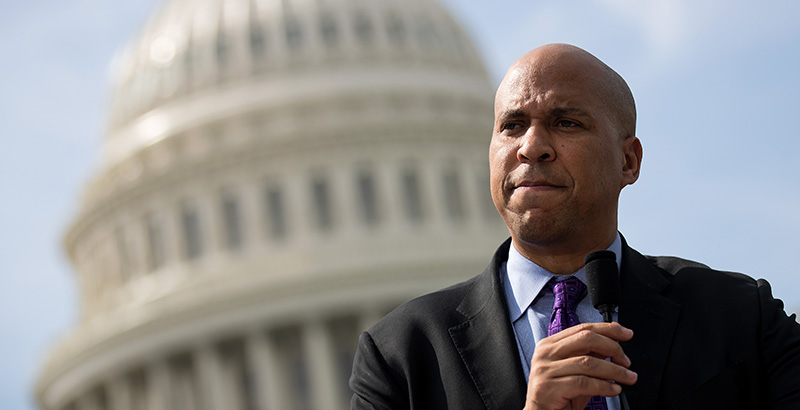 Let us all praise Cory Booker: While some may have cringed at the senator’s bombastic “I am Spartacus” moment at Brett Kavanaugh’s Supreme Court confirmation hearing, give him this: He’s not pulling a Hillary Clinton.

Booker, to all appearances, has set his sights on a 2020 presidential run — he already placed four aides in Iowa — but one can detect no pivot from his progressive roots in school choice and equity that marked his mayoral tenure in Newark. Unlike Clinton, who went from charter school fan (“I favor promoting choice among public schools, much as the President’s Charter Schools Initiative encourages”) to charter opponent (“most charter schools, they don’t take the hardest-to-teach kids”) in order to win endorsements, Booker isn’t cowering to special interests. Instead, he’s doubling down on his reform credentials, as well as attempting a reset of the distorted narrative of Newark Public Schools.

His determination to correct the record about the past 10 years of the city’s public education history rings out loud and clear in Laura McKenna’s interview with the senator and the accompanying Q&A. And that’s a tough slog. After all, a false narrative is practically etched in stone, based on a book by Dale Russakoff called The Prize and, for those who didn’t read the book, reviews like this one by Alex Kotlowitz, who denigrates the collaboration among Booker, then-Governor Chris Christie, and Facebook’s Mark Zuckerberg to inject renewal into the decades-long ignominy of New Jersey’s largest school district.

EXCLUSIVE: Senator Cory Booker Speaks Out About Newark School Reform, Equity, and Mark Zuckerberg’s Millions Ahead of a Possible Run for the Presidency

“Their plan gets off to a rocky start,” writes Kotlowitz, as “their moneyed backers” exercise “their ideological furor to create more charter schools.” They hire “white … consultants” and bring on “ideologue” Cami Anderson as superintendent. Hence, “this bold effort in Newark falls far short of success.”

Or this, from the New Yorker profile of Mark Zuckerberg that will be in print Sept. 17: The project “quickly encountered opposition from local groups that saw it as out of touch, and, eight years later, it’s generally considered a failure.”

Or this column from Andrew Ross Sorkin, who wrote that Zuckerberg’s gift “was largely squandered.”

That’s not what happened.

It’s very important for people to understand this, not only for Booker’s ambitions but, more critically, for Newark’s 50,000 students and their families, almost all brown, black, and low-income. For many, the ability to choose better public schools is largely a product of the collaborative effort that drew applause on Oprah but sneers from those averse to education reform.

If there were a policy solution that would slash childhood illnesses or homelessness by a magnitude of 3, would you do anything but jump on board? Yet Newark’s upward educational trajectory is still criticized by those invested in a system driven by inputs, not outputs. Unnervingly, New Jersey’s current governor, Phil Murphy, has expressed interest in a charter approval moratorium, has close ties to the state teachers union, and disparages accountability through his determination (currently stalled) to eliminate meaningful state assessments. (The latter may be trivial to suburban voters whose mortgages come bundled with good schools, but it is vital to low-income families, mostly people of color.)

So let’s look at what drives Booker to declare in The 74 interview that his intervention in Newark’s public education system is “the proudest work I’ve ever done” and to profess dismay at “one of the biggest disconnects between reality and perception that I’ve ever seen in my politics.”

When Booker served as mayor of Newark from 2006 to 2013, he encountered a school system that the state described back in 1993 as “flagrantly delinquent and at worst deceptive” in its mission of serving children; where 1 out of every 2 Newark students didn’t graduate from high school and average SAT scores were 311 in verbal and 363 in math; a district that civil rights leader Robert Curvin characterized as “shortchang[ing] the overwhelming majority of children who enter its classrooms.”

Not much had changed as Booker assumed his mayorship. This 2007 in-district report confirmed that student access to high-performing schools remained scarce, noting that “2006 data indicate that Newark’s students are behind their state peers in every grade tested that year.” Booker describes “bottom-quartile schools that were an affront to the genius of our children.”

74 Interview: Sen. Cory Booker on Teacher Quality, Celebrity Star Power, and Why His Newark School Reforms Were Actually a Success

I’ve spoken to parents who, during that era, snuck their kids into neighboring East Orange schools, who would have done just about anything to escape New Jersey’s system of linking zip codes to district assignments.

There wasn’t a heck of a lot Booker could do with the traditional schools, because since 1995 they’d been under state control and he had no legal oversight. (The district regained governance last year.) But he could expand the small, if robust, public charter school sector, which already had the highly regarded Uncommon North Star Academy (which came to Newark in 1997) and KIPP (which came to Newark in 2002). That didn’t happen with Zuckerberg’s money: His $100 million donation was only one-tenth of the district’s annual operating budget of almost $1 billion, and most of that went to retroactive payments to teachers after a long-festering contract dispute. Booker himself raised another $100 million; in all, explains McKenna, that chunk of change represents 4 percent of the total Newark school budget over the five years it was distributed.

Richard Whitmire has argued that the Facebook money should have been spent entirely on charter school expansion. But, in fact, charter schools in Newark grew organically, driven by parent demand. Under Newark’s universal enrollment system, typically 50 percent of parents list charters as their first choice. In New Jersey, the state education commissioner is the sole authorizer of charter schools; Chris Cerf (who later served as superintendent) and his successor, David Hespe, obliged parents by approving expansions for KIPP and Uncommon, as well as other operators with records of student achievement. (They also closed 10 percent of charters throughout the state for subpar performance.)

The data back up the wisdom of Newark families. Stanford’s Center for Research on Education Outcomes (CREDO) reported that “on average, students in New Jersey charter schools learned significantly more than their virtual counterparts in reading and mathematics.” Research conducted by the Center on Reinventing Public Education shows that among 50 cities studied, only 8 percent of students were enrolled in public schools that “beat the odds” — but in Newark, that figure soared to 40 percent, solely due to the educational advantages afforded to charter school students. A recent study from Harvard’s Center for Education Policy Research found that high school graduation rates increased “dramatically,” controlling for poverty and English learner status; Newark students showed “significant gains” in math and English test scores between 2009 and 2017; and black students in Newark are three times as likely to attend a school with test scores above the state average today as they were in 2009.

Booker’s focus on students and their academic outcomes is key to the improvements in Newark’s public education landscape. Yet there’s a catch, and it’s President Donald Trump. Our commander in chief’s appointment of Education Secretary Betsy DeVos has tied progressive reform efforts to her ignorant, reactionary stance on everything from discipline disproportionality to rescission of Obama-era guidance on special education to, yes, school choice. It would be so easy for Booker to pull a Clinton, to dismiss his Newark reform record as a historical anomaly, of that time, of that place, to distance himself from our national embarrassment.

But he’s not doing that. He’s owning the revival of high-quality public education options in Newark. That’s smart, and it has the benefit of being true. We’ll see if that’s smart politics.