29 States Spending Less on Schools Than Before Recession, Report Finds 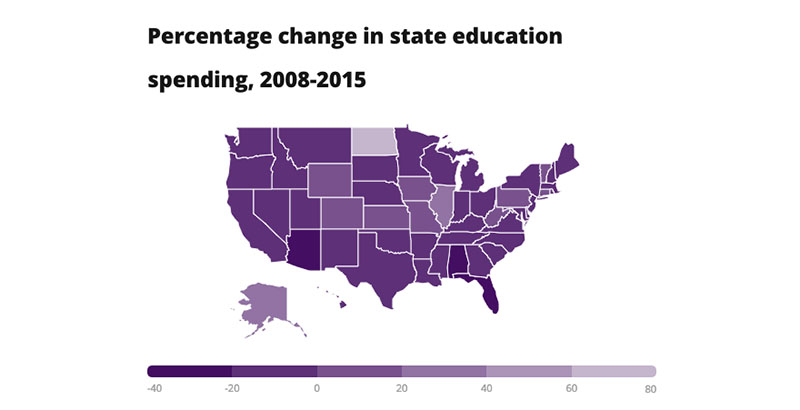 A majority of states provided less money to schools in 2015 than they did before the 2008 recession hit, a new report by the liberal Center on Budget and Policy Priorities says.

“Education is key to the aspirations of individual children and it is also key to the country’s future economic growth,” Michael Leachman, the center’s director of state fiscal research, said.

Seven states — Arizona, Florida, Alabama, Idaho, Georgia, Texas and Oklahoma — spent at least 15 percent less per student in 2015 than in 2008, the group found. States that increased by more than 15 percent were Vermont, Connecticut, Iowa, Alaska, Illinois, and North Dakota, ranging from 15.5 percent in Vermont to 96.2 percent in North Dakota, where state revenue skyrocketed during the fracking boom.

The figures, based on statistics from the U.S. Census Bureau, compare per-pupil funding, adjusted for inflation. The 2015 figures are the most recent available; there were not enough data available to make comparisons for Hawaii and Indiana; and the District of Columbia, which functions in many ways as both a city and state, was not included.

“Those sorts of cuts are damaging not only to the experiences of students but also to the national economy,” Leachman said on a call with reporters Tuesday.

State education budgets have become huge issues in recent years, from budget crises that plagued Pennsylvania and Illinois, to big drops in oil revenues that burdened budgets in Oklahoma and Wyoming, to court cases pushing more funding in Kansas, Washington, and Connecticut.

State spending makes up 47 percent of total school funding, Leachman noted. After a big infusion of education dollars in 2009, federal funding has been stagnant or cut in recent years.

Tax reform bills now before Congress could exacerbate the problem, Leachman predicted, by increasing the national deficit and forcing cuts to discretionary spending, like the money spent on education.

Advocates have also raised concerns about a plan to end federal deductions for state and local taxes, a move they say could put pressure on state and local officials to cut taxes at those levels, making less money available through revenue generators like local property taxes to fund schools.

Even if they wanted to, local governments, facing falling property values and, in some places, caps on how much they can raise their own tax levy, couldn’t make up the difference.

The country has 1.4 million more students but 135,000 fewer teachers and other school workers than before the recession, Leachman said.

State budgets were decimated by the recession, which began in earnest in 2008. The deep funding cuts come from a variety of factors, including lawmakers’ decisions to respond to the recession by cutting spending rather than adding to the tax burden on residents already facing unemployment and the threat of losing their homes, falling state revenue from taxes and oil, and rising costs for services, the center’s researchers wrote.

The report also looked at 12 states researchers deemed “of particular concern” based on those that had cut funding most deeply in a report the think tank released last year. They were Alabama, Arizona, Idaho, Kansas, Kentucky, Michigan, Mississippi, North Carolina, Oklahoma, Texas, Utah, and West Virginia.

Researchers studied state “formula” dollars for K-12 spending — a different figure than used for the overall comparisons — for the current school year, and found that none had raised funding enough to offset previous cuts, and seven of the states cut per-pupil funding even further this year.

“It’s very concerning that some states continue to debate tax cuts and [particularly] in states that have already deeply reduced support for their schools. It’s evident from our data that … a high share of the deepest-cutting states also cut income tax rates in the last few years,” Leachman said. “That just dug their hole deeper.”