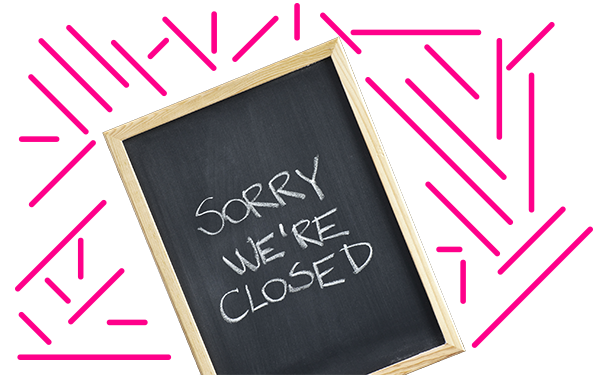 This piece was published in partnership with The Atlantic
Pennsylvania public schools are now at Defcon 1 — borrowing millions of dollars to keep the lights on, starting to ask teachers to work without pay, and even voting to shut the schoolhouse doors and send the kids home — all because an unprecedented state budget crisis has left them within weeks of insolvency.
Funds are running out so fast in Erie, the state’s fourth-largest city, that the schools could shut down by Nov. 1. The school board last month unanimously authorized that previously unthinkable option. If the money runs dry, Erie would consider requiring its 12,000 students to stay home for a week or two.
Yes, it would disrupt their learning. Yes, it would present families with unexpected child care chaos. But talking to the anxious administrators on the ground, it soon becomes clear: their options are disappearing as quickly as their bank accounts.
"Nobody anticipated the budget would come in on time … we knew that this impasse would happen, but as it drags on and the effects become more real, it takes on the sense of a crisis,” said Erie’s Public Schools Superintendent Jay Badams. “It also seems more and more ridiculous. All of our money’s sitting there in Harrisburg [the state Capitol] and here we are having to contemplate shutting down."
Such are the outrageous options that a startling number of Pennsylvania school superintendents are actively considering, three-plus months into the state budget standstill that’s left 500 of them struggling to make it through the first half of the school year with page after page of their budgets missing in action.
Legislators’ inaction since the deal was due June 30 has, so far, resulted in the withholding of some $2 billion in state aid payments to districts. By the end of this month, that number is expected to soar to $3 billion. Even in the Keystone state, where budgets are routinely delayed by weeks or months, this is uncharted territory, school officials say, and goes far beyond the usual faceoff between states and their school districts over funding allocations.
Exacerbating the Harrisburg hangup: Many Pennsylvania districts, still recovering from the recession and a massive 2011 state aid cut, were already financially vulnerable.
“They were going into this delayed budget with less financial resources behind them than they would have the last time around,” said Pennsylvania School Boards Association spokesman Steve Robinson. Another strain: district contributions to employee retirement accounts have jumped to around 20 percent, he said.
The PTSA has stepped up to fundraise but you can only hold so many bake sales
Throughout the state, Pennsylvania school districts had already borrowed more than $346 million — led by Philadelphia, which borrowed $275 million — to make payroll and fund basic services as of Sept. 29, the state Auditor General reported. Withholding payments from school district vendors has now become a common occurrence, and nearly two dozen districts have already suspended tuition payments to charter schools.
Back in Erie,  Superintendent Badams says that borrowing $30 million to keep Erie schools temporarily afloat for another two months, would be a less catastrophic alternative to closing the schools this fall. But that would push the district, already $9 million late in payments to vendors, further into the red.
Erie is worse off, financially, than almost every other district in the state — its tax base is eroding, 70 percent of its budget comes from the state and 80 percent of its students come from low-income families — but it is hardly alone in feeling Pennsylvania schools’ Dickensian-like pain.
Carbondale Area School District, which serves 1,650 students in northeast Pennsylvania, has dipped into a $900,000 tax anticipation note to cover short-term costs — think buying groceries on your credit card. Officials are considering closing schools one day a week as the cold weather means lights and heat are on for more hours.
“These are the realities that we’re faced with because no money is coming in, bills are behind … and expenses are going to increase now that the winter months are setting in,” Superintendent Joseph Gorham said. “By the end of October if there’s no movement, we’re in trouble.”
Kelly Heberle, a mother of three students in Erie schools and an active member of the Parent Teacher Student Association, said her district’s barebones budget has caused small but necessary items to go missing — like eggs in the culinary class and clarinet reeds in the middle school band.
The PTSA has stepped up to fundraise but you can only hold so many bake sales, she said.
“The failure of Harrisburg to come to terms is affecting a heck of a lot of families and it’s just not fair,” she said. “Kids in Erie are already underprivileged to begin with … they don’t need leaders in Harrisburg to be playing a standoff game.”
Western Beaver Schools toyed with suing the Commonwealth, but they can’t afford it
How did things get so bad in Pennsylvania and what will it take to keep the schools open?
Democratic Gov. Tom Wolf, in his first term, proposed an historic education overhaul that would increase funding for pre-K-12 education by about $2 billion over four years. To do that, he proposed hiking sales and income taxes, and also wants to generate a new levy on natural gas drilling, in order to ease property taxes that fund schools — all measures opposed by the Republican-controlled Legislature.
Meanwhile, a new school funding proposal intended to mend the equity gap between Pennsylvania’s poor and wealthy districts is awaiting passage along with the state budget.
The proposal was crafted in 2014 under Wolf’s predecessor, Republican Gov. Tom Corbett, and has bipartisan support. In fact, state officials traveled the state seeking input from local school officials, educators and unions as they put it together. 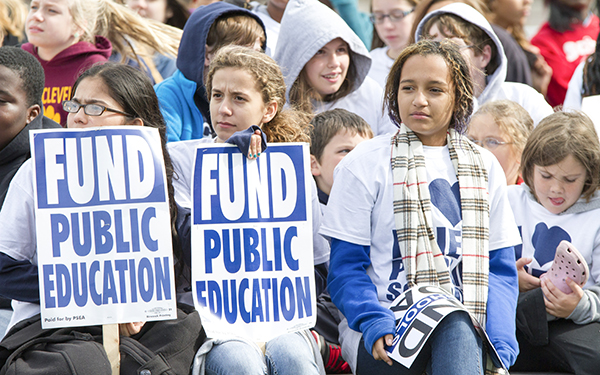 More than 2,000 Erie public school students, teachers and parents rallied at the school sports stadium Oct. 2, 2015 to urge state lawmakers to pass a budget. A budget agreement would end the three-month impasse that has forced Pennsylvania schools to go without $2 billion in state aid. Some districts are considering a temporary shutdown to save money. Others have already borrowed millions. (Photo courtesy Erie's Public Schools Photographer Don Mroczkowski)
Pennsylvania is one of only three states in the nation that doesn’t have a school funding formula, and instead distributes education aid on an “ad-hoc” basis, inconsistently targeting higher-need districts, said Hannah Barrick, director of advocacy for the Pennsylvania Association of School Business Officials.
“There’s a lot of inequity in what school districts are getting — some get $400 per student, some thousands of dollars per student,” Barrick said. “I think everybody agrees that the way we do it right now doesn’t work.”
The proposed formula would distribute local aid based on student enrollment, number of English Language Learners, student poverty, attendance at charter schools, and local taxing capacity, among other factors that drive the cost of education and aren’t really considered now, Barrick said.
Yet Democrats and Republicans remain fiercely divided on how much to pump into schools, with Wolf pushing for additional aid to restore the 2011 cuts and Republicans opposed. Legislators in the state House rejected a revised version of Wolf’s plan Wednesday, leading Capitol watchers like Barrick to predict at least another four to six weeks of impasse — far longer than some districts can hold out financially.
“We’re preparing for a long haul, possibly till December or January,” said Brad Ferko, superintendent of the Sharpsville Area School District in northwestern Pennsylvania.
That means school superintendents and their boards, particularly in districts that can’t fall back on local tax revenue, are hashing out contingency plans, including asking teachers to work for IOUs and cutting kindergarten classes, early childhood programs, support staff, language programs and extracurriculars.
“It’s completely reasonable given the uncertainty that we have right now … and that will get worse as this continues,” Barrick said.
Hoping to put pressure on state lawmakers to work harder and faster, more than 2,000 Erie teachers, parents and students rallied at the district’s football stadium on a rainy recent Friday. Advocacy campaigns are springing up in other districts, like Carbondale, which is partnering with United Way to send postcards to Harrisburg urging lawmakers into action.
Western Beaver County School District, a small district outside of Pittsburgh, near the Ohio border, plans to borrow $2.4 million in late October and even toyed with the idea of suing the Commonwealth, Superintendent Rob Postupac said.
Only catch: They can’t afford to file suit.
Shutting schools “is the last thing I’m going to do,” Postupac said. In the worst-case scenario, Postupac said the district would cancel athletics and other non-mandated extracurricular activities before calling off class.
“I guarantee you if the state of Pennsylvania did not play football Friday nights and the bands didn’t march and the cheerleaders didn’t cheer … you’d hear a cry so loud to the legislators that every parent would be involved then, “ he said. “And then something would happen pretty quick.”
Submit a Letter to the Editor
October 20, 2015