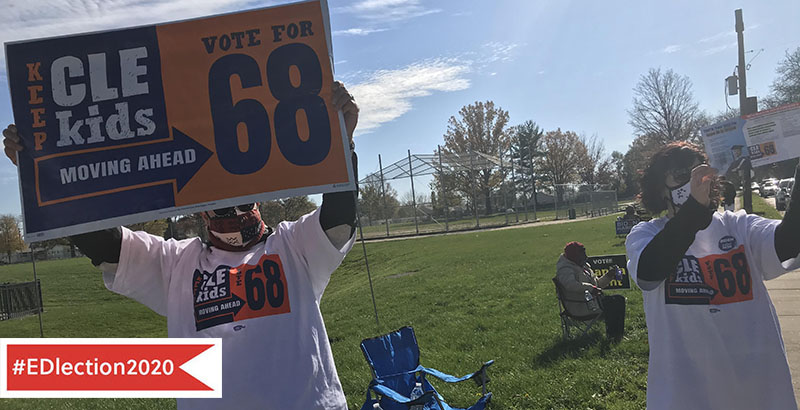 A tax increase for the Cleveland schools was on its way to a decisive win Tuesday night, giving the district extra money to handle the COVID-19 pandemic and avert the massive cuts a defeat would have brought.

Shortly before midnight, the tax was winning 61 to 39 percent, as voters strongly backed a $23 million tax increase for the district and the continuation of a $67 million tax they first passed in 2012.

The likely approval comes even as the city has a 15 percent unemployment rate, triple what it was pre-COVID. It also comes despite the first organized opposition to a school tax in decades.

The tax, the district’s first operating tax increase since 2012, will cover rising costs, as well as pay for efforts to teach students during the pandemic. Among those is continuing to give every student a computer and internet access permanently, instead of just making the purchase of computers because of the pandemic a short-term plan.

The district has given classes entirely online this school year. Rising COVID rates recently dashed hopes to bring some “academically vulnerable” students back to school for in-person lessons, including English Language Learners, high school seniors in danger of not graduating and career technical education students who need lab or workshop time to earn industry certifications.

The district is working with a local non-profit to make internet access almost a public utility that the district can give all of its students. For now, many are using district-paid hotspots for online classes.

Had the tax failed, the loss of the $67 million tax would have cost the district 12 percent of its operating revenue. It could have forced the district to close 25 of its 100 schools, slash arts and athletic programs and cut staff at schools and the central office.

Voters had expressed mixed feelings about the tax to The 74 at the polls Tuesday and in the days leading up to the vote.

Some voters on Tuesday said the opposition campaign and multiple mailings to voters’ homes made their support for the tax stronger.

“I felt like I was being harassed through my mail,” said Iesa Lee, who has a son at a district elementary school. “I got a postcard saying to vote against it. It blew my mind, so I voted for it.”

Some voters said they could not support an increase during the economic downturn.

“I can’t afford to pay for my house, but I can afford to pay these taxes?” asked Cleveland resident Unique Toomer in the days leading up to the vote.

And voter Eric Baker said he opposed the tax even without the recession because he thinks the schools are not improving. He also objected to the district seeking the increase and tax extension all at once, instead of letting voters decide on each separately.

“People probably would have went for the extension, but they want more on top of it,” Baker said just after voting in the morning. “That should be two separate issues.”

But parent Christina Akita said COVID and classes having to be online only brought more support for the tax.

“If anything, it makes people realize how important school is, now that they’re being the teacher,” Akita said.