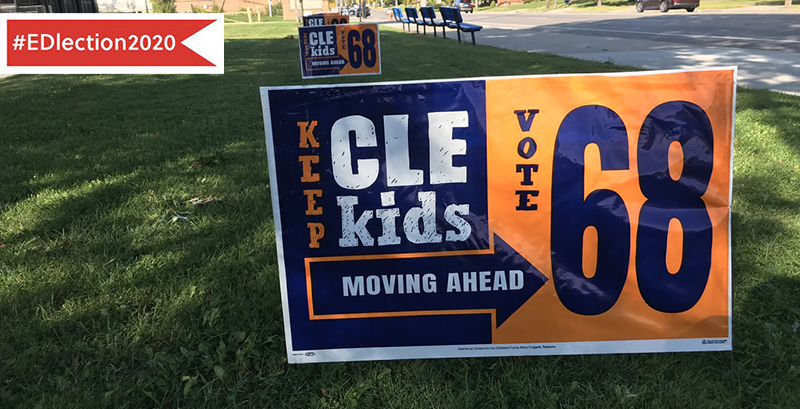 The Cleveland school district tax increase on Tuesday’s ballot isn’t a big one and would add a modest cost for most homeowners in the city.

But the challenges and stakes are greater than the district has seen in years.

Voter approval would add $23 million a year to the district’s budget to cover normal cost increases and continued computer and internet access for students.

But because of a risk CEO Eric Gordon and the school board took this summer, when they combined the increase with the needed renewal of an existing tax, a loss could cost the district $67 million a year.

That would slash 12 percent of the operating budget and could force drastic cuts, such as closing 25 of the district’s 100 schools, according to a contingency plan filed with the state. Sports and arts programs could be axed, along with administrators at schools and the central office.

“The cuts will be very deep and will affect all levels of the system,” Gordon told the school board, as he presented the plan as one possible way of balancing the budget. The board could make reductions in other areas instead, but the dollar amount would be the same.

While stressing that he is not trying to scare voters into passing the tax, he said the financial future would be “very gloomy” if the measure failed.

“You don’t reduce your budget by over 10 percent without getting at the stuff that’s closest to kids,” he said.

Whether the tax is in real danger of failing at the ballot box is unclear. There have been no polls of voters on the issue, other than by the tax campaign, which has said only that it found support for the levy.

But tax increases are risky in Ohio, and the COVID-19 recession has only made them more so. This is the first tax proposal in decades to see organized opposition. Though the pushback has been mostly anonymous, it is coming from large-property owners worried about increased tax bills.

Jeff Rusnak, a political consultant who has worked on several campaigns in the city and county, including some in the Cleveland school district in the 1990s and early 2000s, said crises make it hard for a message to cut through the noise and get to voters. With COVID-19 halting campaign rallies and face-to-face meetings, that’s even harder.

He also said that in the nearly 30 years he has been working in the city, he has never seen opposition to a Cleveland school levy like the mailings to homes and social media ads this year.

Still, he thinks the tax has a decent chance of passing.

“While there are obvious challenges out there, voters are willing to make sacrifices when it comes to children and the schools,” he said.

Even without the pandemic or an opposition campaign, tax increases are hard to pass in the state. According to the Ohio School Boards Association, tax hikes win voter support only 38 percent of the time. When districts seek just renewals that continue a tax without any increase, they win 89 percent of the time.

In Ohio’s spring election, after COVID-19 hit, that pattern continued. Statewide, 43 of 46 school tax renewals passed, but just 20 of 53 requests for new levies won at the polls.

That trend is what makes Cleveland’s strategy a risk. A tax worth $67 million must be renewed this year and would most likely pass, but when combined with the $23 million increase, its chances fall.

Gordon said this summer that it is likely voters would pass the renewal and turn down the increase if the district had them as separate ballot issues. But the district has not seen an operating tax increase since 2012, costs are rising because of COVID and normal inflation, and a renewal alone would mean cuts this spring.

The local economy has improved since last spring, which heightens the chances of passage. Unemployment in Cleveland has fallen from 26 percent in May to 15 percent in September, though that’s still triple the 4.7 percent unemployment rate of September 2019.

The “bad economy” and potential harm to businesses, along with increased rents if the tax passes, have been the focus of a series of mailings sent to voters by opponents operating as Cleveland’s Future Fund LLC.

The tax, the flyers say, will “force small businesses in Cleveland to close as they get hit with more costs during a bad economy, making it impossible to keep their doors open.”

Attempts to track organizers through corporate records have hit dead ends, though one downtown Cleveland landlord has said publicly that he contributed to the opposition campaign.

Doug Price of K&D Properties told Crain’s Cleveland Business that the pandemic has hurt downtown businesses that pay him rent.

Price did not respond to an email from The 74. Other property owners groups also did not respond. They have been quiet since the opposition campaign started, possibly fearing repercussions from the city. Mayor Frank Jackson is more involved in the schools than in most cities and appoints all school board members.

American Federation of Teachers President Randi Weingarten blasted that secrecy when she visited Cleveland on Oct. 20 as part of a national bus tour to campaign for Democratic presidential nominee Joe Biden and for a few local issues.

“Have the good faith, have the moxie, have some courage to at least tell us who you are,” she said. “Are they the developers that want their little tony tax breaks? Who are you? Don’t do this to children.”

Not all property owners are opposed. Ralph McGreevy, president of the Northern Ohio Apartment Association, said his members have braced all year for a collapse in the rental market but has seen only small drops that it can handle. Rent collection, he said, has fallen from the usual 90 to 94 percent range to 86 to 90 percent.

His group endorses the tax, he said, and is bothered by the opposition campaign.

“I’m disappointed that any of our members fail to understand that any of the children that live in our buildings are our future,” he said.