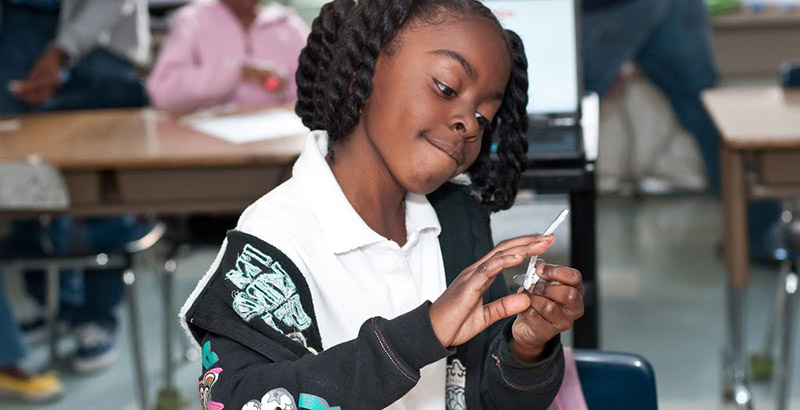 Young girl works on a STEM project in an Iridescent program. (Iridescent)

Tara Chklovski grew up tinkering with engine parts splayed out on her dining room table — hardly the norm for girls being raised in India in the ’80s. Her father ran a mechanic shop after serving in the Indian Air Force and her mother was a doctor in the Army. Seeing her parents embody these powerful roles as they encouraged her to do the same, led the young Chklovski to believe she could do anything she wanted, despite the cultural restrictions imposed on girls.

Chklovski and her team’s latest venture is a global initiative off the Curiosity Machine platform called the Curiosity Machine Artificial Intelligence Family Challenge, which is introducing thousands of third-graders to high schoolers and their parents to the basic concepts of artificial intelligence. The idea is to “demystify” AI by exploring how the technology exists in our everyday lives — in a car’s GPS system, for example, and how families can use it to solve problems in their own communities.

The challenge kicked off last year at the Association for the Advancement of Artificial Intelligence conference in New Orleans. Among the 60 U.S. schools that participated in the kick-off is NOLA’s KIPP East Community Primary School, where kids and their parents learned about the AI concepts of processing “big data”[a term that refers to massive data sets that may be analyzed to reveal patterns, trends, and associations, especially relating to human behavior and interactions]and self-driving cars. Students and parents then designed and built their own models out of paper, ping pong balls, circuits, and LEDs.

Chklovski spoke with The 74 about Iridescent’s origin story and her goals for the AI family challenge.

This interview has been lightly edited for clarity and space.

The 74: What inspired you as a young woman growing up in India to study aerospace engineering in the U.S., and ultimately to leave your doctorate program to found Iridescent?

Chklovski: Ever since I was a little girl, I wanted to either fly airplanes or build airplanes and so I came to the states to do a Ph.D. in aerospace engineering. Coming from a completely different culture and background, I was intrigued that in the U.S., a first-world country, there wasn’t that same drive, especially for girls, to go into engineering and tech careers. While I was pursuing my Ph.D., it was just very stark to me to see the lack of women in the engineering field and that most of the students are actually from Asia. The more I thought about it, (I saw that) it was a case of a loss of human potential. If you go into the engineering and tech disciplines, it’s not as if you (necessarily have to) become an engineer or a programmer; it’s more that you will learn a way of thinking and questioning and problem-solving that can be applied to anything. If you don’t go through that, you’re missing out on a whole skill set that I think is more and more important in our current (world). 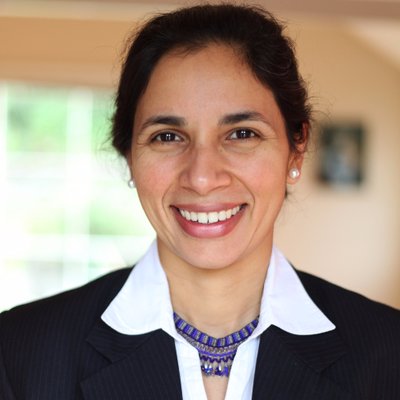 It was very troubling to me that girls are given this message that these fields are not for them. And this was about 13 years ago, when there was none of the current discussion around gender and diversity and inclusion, especially in the STEM fields. That’s why we have such a big problem with the lack of diversity and perspective at the leadership level and in the fields of innovation. So that’s why I decided that, yes, there was value to doing a Ph.D., but I also felt that I could make a much bigger impact in a much bigger problem if … I was able to come up with a new way of inspiring groups that are traditionally left out of these very high-potential fields, such as technology, where one person can make an impact. It was a tough decision, but I started Iridescent.

What are you hoping to achieve with the Curiosity Machine Artificial Intelligence Family Challenge?

We launched the Curiosity Machine Artificial Intelligence Family Challenge with the idea that we want to challenge children and parents to look about their world, find the problems they’re passionate about and actually create an AI-based software or hardware solution. (Three AI areas they’ll focus on are voice assistants, vision recognition, and autonomous vehicles.)By doing so, they get a taste of what the most cutting-edge technologies are but also (learn) that they have a role to play. … It’s making sure that right from the very start, these groups are not left out. In general, (our approach is to) demystify AI, because frankly, the media has done quite a lot of injustice to it and there are a lot of negative perceptions around it and we want to counter that.

How does the challenge work?

We have 10,000 students and parents signed up so far, including in the Los Angeles Unified School District, in Michigan schools, and in libraries in L.A., Chicago, and Philadelphia. We also have about 100 community partners — library systems, schools, maker spaces, afterschool science clubs — all over the world, bringing together families. The idea is that they go through the curriculum that’s online; first getting introduced to the basics of machine-learning. In the fall (2018), they choose a project they’re excited about and actually create an AI-based hardware or software project using some really cool tools that are now coming out into the market. Then there will be a regional pitch event where the families pitch their ideas and six finalists will be chosen to go on an all-expenses-paid trip to Silicon Valley … to meet some of the titans of the industry, visit labs, and present their ideas to the public.

The challenge is free to participants. Our partnership with Google enabled us to launch the program and give out 100 grants of $5,000 to community partners who are managing each site and leading the curriculum. Our other sponsors include General Motors and the McGovern Foundation. This is a $2 million initiative to start and we’re looking to raise $2.5 million to $3 million (in 2019).

(The challenge attracted 200 families from 11 countries in two categories: junior, ages 11 and younger, and senior, ages 12 to 16. Six families were named finalists in March and the winner will be chosen May 18 during their trip to California.)

Many parents work multiple jobs just to put food on the table, and others struggle to find time to help their kids with homework. How are you able to retain participants through the school year and avoid adding stress to struggling families?

Underserved, underrepresented groups are as busy as pretty much any parent, and they have fewer support systems. The key strategy we’ve used in the past successfully is to run these kinds of learning programs during dinner time so that it frees up time and space for the parent to focus on more meaningful things. (The grants allow Iridescent to cover the cost of food and equipment for the families during the sessions.) The main reason why families come back to these sessions is because of the very special bonding experience that the parent and child has. This (could be) the first time the child sees their parent learning something new.

The parents, typically it’s the mothers, are often immigrants, they don’t speak English, they may have a very low level of formal education and pretty much never any kind of interest in science and engineering. But they come to this program because they’ve heard about the importance of it and they want their child to have a better life than they. Once the parent comes in, they’re completely intrigued by these new horizons that open up … and they’re able to model lifelong learning for their child.

What do you think are some of the biggest misperceptions about AI? Why is it something we should be embracing rather than be frightened by?

I think the main danger there is that even highly educated folks have a very negative perception and a very visceral image of a big evil transformer robot — that’s the standard visual that people have when they think of AI and I think the media and movies have done an injustice that we now have to counter. What people don’t realize is that AI is everywhere — it’s just that when something is ubiquitously used, it stops being called AI. It’s in your GPS, it’s in your Netflix recommendation system, it’s definitely in your social media. These are algorithms that are helping (programs) become smarter and better to use and they increase productivity, but people don’t see them as AI. … It’s so important for education organizations to really acknowledge this big problem.

There’s a whole range of applications for AI that goes far beyond the big evil robot (stereotype), and we need to provide very concrete images to replace (that stereotype). Researchers are looking at how AI technologies can be used to conquer all types of issues, like a digital writing and grammar coach, or (mental health monitoring apps) that help families know when their loved ones are at risk of going into crisis.

The way I see it is that people just have a lot of scary images around AI being evil and taking over our lives in some sense — that children will have too much screen time, that children will spend much more time being addicted to these kinds of technologies without having a sense of control over them. I think our recent conversations about social media, about Facebook addiction, is representative of the way that AI technologies do infiltrate our lives and then become a very integral part of our lives. I think there’s no choice there — it’s just going to happen, and so it’s up to us to really make sure we have a counter-narrative where children and adults can make these technologies better and we choose in which way we want to interact with them. But we need to be able to understand how they work in order to do that.