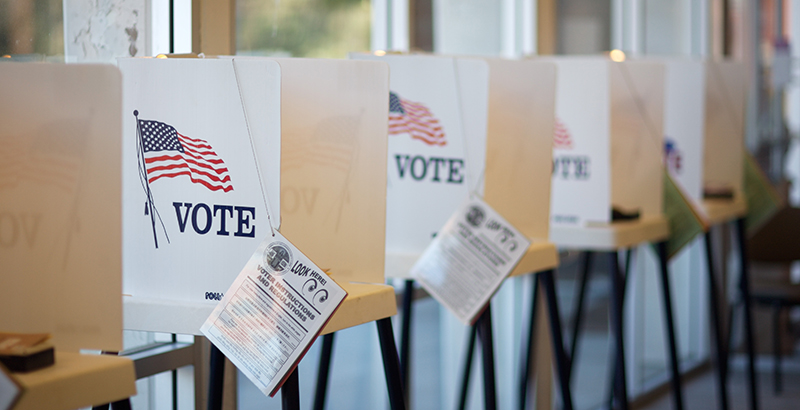 New poll findings released by Democrats for Education Reform on Monday found that a majority of U.S. voters believe in reform policies such as expanding public school choice and rewarding quality teachers, and hold that funding alone won’t push the needle forward on helping struggling schools.

For DFER, a left-of-center political action committee, the findings demonstrate that most Americans are what they call “education progressives” — a result that would seem to contradict reports of a splintering within the Democratic party over issues like school choice and merit pay.

Pollsters from the Benenson Strategy Group and 270 Strategies interviewed more than 2,000 voters between May and July.

The poll, on top of informing a new social media campaign, anchored the organization’s latest announcement that it will spend more than $4 million this year — an exponential hike from the reported $83,456 it spent in 2016 — on “priority races.” These include gubernatorial contests in Colorado, New York, and Connecticut and the superintendent’s race in California. Certain beliefs of “education progressives,” such as charter school expansion, may put them at odds with other self-described progressives within the party.

“Being an education progressive means doing anything and everything we can to improve public schools for all — especially for poor students and students of color,” DFER President Shavar Jeffries said in a statement.

Seventy-eight percent of all voters — 93 percent of Democratic primary voters — strongly agree that “we need to do everything we can to ensure every child has a fair shot to succeed, no matter where they are from.”

The finding is underscored by stark achievement gaps. Black students, for example, were more than 1.5 academic years behind their white peers in 2017, according to NAEP data. Reforms such as free, high-quality pre-K have amassed support across the political spectrum as a way of narrowing the gap, while Secretary of Education Betsy DeVos has also pushed for expanding charter schools.

Sixty-nine percent of Democratic voters say fixing schools “will take more than just additional money … we need new ideas and real changes to how schools operate.” Among African-American voters, that percentage spikes to 73 percent, but it drops to 56 percent when put to all voters, regardless of party.

Opinions (and research) remain split on whether funding is linked to student performance. While some research has found that student test scores can rise following long-term, stable financial investments, critics have pointed to the Obama administration’s $7 billion program to overhaul chronically low-performing schools — which yielded no significant impacts on test scores — as evidence that funding isn’t a panacea.

3 However, voters believe schools should still get the funding they need

The vast majority of voters — 89 percent — believe that every public school should still “get the funding that it needs, even in disadvantaged areas.” These voters gave this issue a 6 or 7 on a 7-point importance scale.

Per-pupil spending nationwide is not equitable, according to many critics. Across the country, districts with the highest rates of poverty receive about $1,000 less per student than those with the lowest rates, the Education Trust reported in February. State-to-state fluctuations reveal the scope of the problem: New York, for example, spends more than $22,000 per student, while states such as Utah and Idaho spend less than a third of that.

Seventy-six percent of voters, including 90 percent of black voters and 80 percent of Latino voters, strongly agree that “we need to do more to identify and reward great teachers who make a difference.”

The idea of evaluating and rewarding teachers remains contentious, however. The Obama administration’s calls for merit pay and tying teacher evaluations to student test scores spurred backlash from teachers unions.

Educators themselves are some of the most fervent critics, with 78 percent opposed to merit pay, according to a 2017 Education Next survey. Research is mixed on whether merit pay correlates with improved student performance.

The Merit Pay Myth: Why the Conventional Wisdom About Paying Teachers Is Wrong

About 65 percent of voters said access to public charter schools, magnet schools, and career academies “no matter where [people] live or how much money they have” is a very important priority (a 6 or 7 on the 7-point scale). Latino and Democratic primary voters closely aligned with this percentage, compared with an overwhelming 86 percent of black voters.

All but six states have laws allowing charter schools. But support of traditional public education hasn’t necessarily waned. Most Americans oppose channeling public funds to for-profit school tuition, and nearly three-quarters say all schools “should have to meet the same state education standards as traditional public schools,” according to a Harvard poll.

Nearly two-thirds of voters, or 66 percent, rank “holding schools accountable for making decisions based on what works to educate kids” as a very important priority — a 6 or 7 on the 7-point scale.

Increasingly localized control of education policy has diminished the role of the federal government in school accountability — a shift evident in the Every Student Succeeds Act (ESSA), the main U.S. education law that replaced No Child Left Behind in 2015.

“There seems to be a lack of commitment to any meaningful federal role in terms of accountability,” DFER’s president told Chalkbeat last year. “We’re very worried about what we’re going to see coming out of the ESSA accountability process.”

Sixty-eight percent of voters say “increasing the availability of financial aid for college” is a top priority (a 6 or 7 on the scale).

The polling reflects a disconnect between voters and the policies of the Trump administration. Trump earlier this year proposed slashing nearly $4 billion in annual funding for student aid programs in the 2019 fiscal year budget. DeVos in July also made moves to repeal the 2016 Obama borrower defense regulation, which supported waiving federal student loan debts for students who were ripped off by “predatory” colleges.

Reaching Out to Every Student, Every Day

Time for the Feds to Close the Digital Divide

The Every Student Succeeds Act