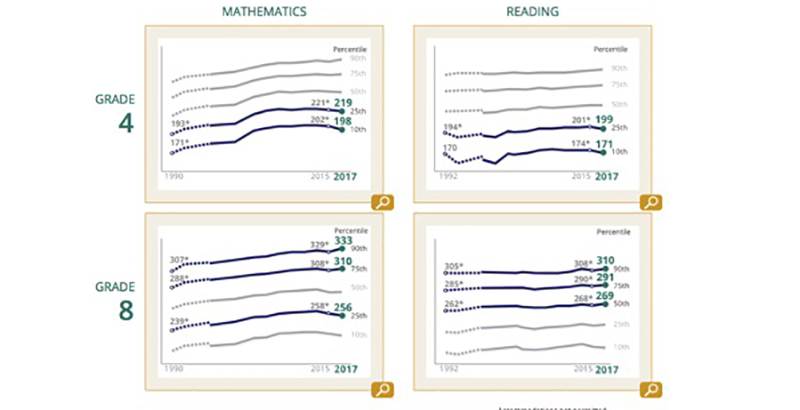 Test scores released Tuesday for the National Assessment of Educational Progress (NAEP) continued a decade-long trend of stasis, with small improvements measured only for performance in eighth-grade reading. While states with disparate academic approaches have made some strides over the past few years — notably Florida and California — national averages have varied only slightly, despite billions of dollars invested to improve performance at the national, state, and local levels.

“This has been education’s lost decade,” Michael Petrilli, president of the reform-oriented Thomas B. Fordham Institute, told The 74.

Over the past half-century, NAEP has been administered every other year by the National Center for Education Statistics (NCES) to test fourth- and eighth-graders in reading and mathematics. Fourth-grade scores in 2017 were flat in math and down somewhat in reading, though the decline was not considered statistically significant. Eighth-graders made incremental improvements in both subjects, though only in reading were they characterized as statistically significant. 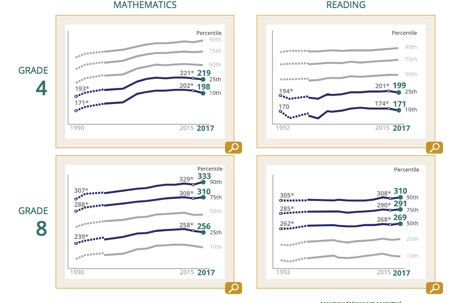 In some ways, the flat trajectory provides relief for educators after the especially bitter NAEP news in 2015, when scores dropped for three out of four age/subject groupings. The development came as states were still rolling out testing regimes aligned with the Common Core, and the new standards were widely (and controversially) blamed for bringing down student performance. 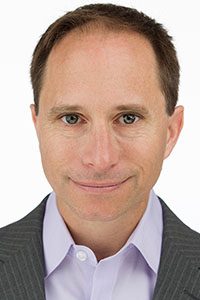 Although scores for American students have gone through periods of sizable and consistent growth — most recently at the dawn of the modern era of academic standards and school accountability in the late 1990s and early 2000s — results over the past 10 years have left education reformers at a loss.

“The one-point [increase] in eighth-grade reading? I’m not going to start a party for that one,” said Petrilli. “We’ve been basically flat since the late 2000s. There was a time when we were making some big progress nationally, and we’re not seeing that now. The results are disappointing.”

NCES noted a troubling trend in scores since two years ago: Even as the status quo held stable for most test takers, scores for the highest-performing eighth-graders (those scoring at the 75th and 90th percentiles) nosed higher, while those for the lowest-performing students (those at the 10th and 25th percentiles) declined in fourth-grade math, eighth-grade math, and fourth-grade reading.

Experts said that any potential growth in America’s “achievement gap” between advantaged and disadvantaged kids could be the result of recent economic trends.

“Some of the hypotheses [for growing score gaps] would include that we’re seeing some of the lingering effects of the Great Recession,” Petrilli said. “And that can impact both kids, individually — what’s going on in their homes, if they’re experiencing greater challenges than before — and … schools, in terms of funding. If that’s a factor, you’d expect to see it most strikingly for the lowest-performing kids.” 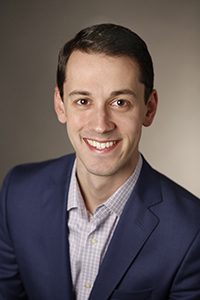 “I think it’s certainly conceivable that that’s a real phenomenon — that there’s a widening of the gaps, and you sort of imagine that that might have something to do with widening socioeconomic gaps or increases in the degree of poverty among relatively poor people in the U.S.,” he told The 74. “That seems plausible.”

Still, he noted, the overall picture is largely the same as it has been for the past 10 years.

“The story seems to be no story,” he said. “On average, it looks like not too much has changed from 2015. I think there was a good deal of progress for most grades and subjects from 1990 up to maybe 2005, 2007, 2009, somewhere in that window. And there definitely seems to have been some sort of leveling off since then.”

The biggest gainer at the state level is clearly Florida, which saw statistically significant gains in fourth- and eighth-grade math as well as eighth-grade reading. In addition, the major Florida school districts of Duval County, Hillsborough County, and Miami-Dade County all made progress over their 2015 results in multiple age/subject groupings.

“Something very good obviously is happening in Florida,” said Peggy Carr, acting NCES commissioner, in a Monday call with reporters. “Florida’s grade for math [was the] highest score ever for them. Also true for Miami-Dade, their highest score ever.”

While the results will give local policymakers cause for either optimism or concern, experts cautioned against interpreting any round of NAEP results too broadly. 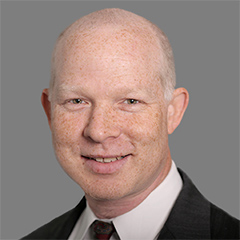 “You’re looking at different kids,” said Mathematica senior fellow Steven Glazerman, lamenting that NCES doesn’t allow researchers to track the same group of students over time. The performance of eighth-graders in 2017 isn’t as informative as it might be, he observed, since they weren’t the same ones measured as fourth-graders in 2013. Movement up or down “could just be reflective of change in composition of those groups over time,” he said.

Glazerman coined the term “misNAEPery” to criticize the tendency among pundits and activists of attributing NAEP changes to specific policies that they either favor or oppose. That’s myopic, he says — and leads to sweeping generalizations about the effectiveness of both the policies and those (from superintendents and school boards to mayors and governors) charged with implementing them.

Beware the NAEP Overreactions: 4 Reasons Why Education Pundits Should Rein in the Rhetoric This Week

“The naive approach is to look across cohorts and draw some kind of conclusion, but it just doesn’t tell us much, other than possibly changes in the composition of who’s taking the test from year to year,” Glazerman said.

He compared the rush to apportion plaudits and blame to the annual NFL ritual of “Black Monday,” when coaches of underperforming teams are precipitously terminated on the basis of their win-loss record. Patriots head coach Bill Belichick, a surefire Hall of Famer, was one such casualty two decades ago, and his firing still haunts his old team.

“You could say, ‘Well that’s correlated with coaching performance,’ ” said Glazerman. “But then you have situations like the Cleveland Browns in 1996 firing their head coach, who turned out to be the best coach in the history of football.”