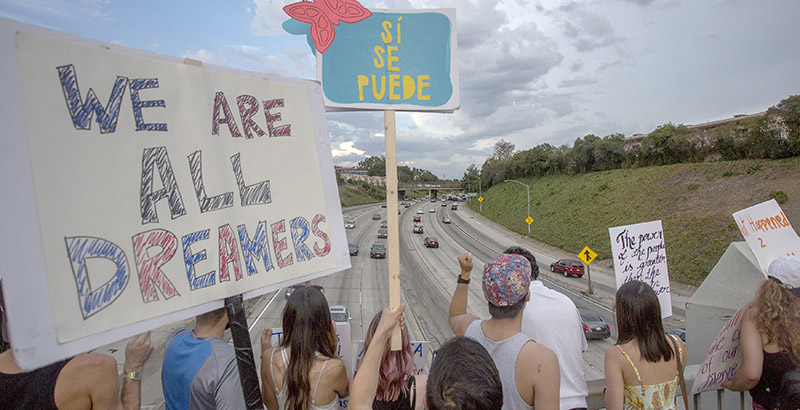 American Federation of Teachers President Randi Weingarten wanted to make something clear: These groups — she said several times — usually don’t get along. But in the fight to protect undocumented students and teachers, the broad coalition of education leaders stood united.

In a conference call Tuesday evening with more than 400 educators from across the country, Weingarten and a coalition of prominent education leaders — including former education secretary John King and Teach for America CEO Elisa Villanueva Beard — called on educators to join the fight against President Trump’s effort to end the Deferred Action for Childhood Arrivals program, commonly known as DACA.

Under the program, the government awarded temporary legal status to some 800,000 immigrants who were brought to this country as children and are either in school or working. That number includes an estimated 365,000 high school students and 20,000 teachers.

The Trump administration announced last week that it will end the Obama-era program in six months. If Congress cannot reach a deal to save the program through legislation like the long-proposed DREAM Act, DACA recipients — often referred to as Dreamers — could face deportation.

King, who served as education secretary under President Barack Obama and is now CEO of the nonprofit The Education Trust, called Trump’s decision “unnecessary, irresponsible, and immoral.” Teachers, he said, have a responsibility to protect children who returned to school this year with heightened fear and anxiety.

“Right now, educators in high schools are concerned that the president’s recent decision to roll back DACA may negatively influence students’ aspirations for college and their goals for the future,” King said. “It’s just one reason why it’s vital for every educator to make your classroom a haven for learning, where all young people — regardless of their background, race, gender, religion, or immigration status — understand that they are welcome.”

Educators should be vocal about their support for the DREAM Act, said the education leaders on the call, who also included Jonah Edelman, Stand for Children co-founder and CEO, and Evan Stone, Educators for Excellence co-founder and CEO. Leading up to Trump’s decision to end DACA, Stone said, thousands of Educators for Excellence members sent letters, wrote op-eds, and placed phone calls encouraging the administration to keep DACA in place.

“Even though this administration has so far ignored our voices and ignored the voices of so many others, we cannot stop,” he said. “We need to be even louder and even more bold in our defense of students and their families who, save a piece of paper, are as American as any of us.”

Lawmakers first proposed the DREAM Act in 2001, but after years of failed efforts, Obama approved DACA through executive order in 2012. That move, Attorney General Jeff Sessions said last week, was an “open-ended circumvention of immigration laws” and an “unconstitutional exercise of authority by the Executive Branch.” In its current form, the DREAM Act would provide a pathway to permanent residency for undocumented immigrants who came to the U.S. as children.

(More from The 74: 20,000 teachers — and the schools where they are teaching — at risk under decision to repeal DACA)

Among the country’s “DACAmented” educators is Ricardo Alcaraz, a Bronx high school teacher who joined Tuesday’s conference call. Born in Mexico City, he was 7 when he immigrated to California with his mom, where he reunited with his father. All his students, he said, are English language learners, and most are recent immigrants. After Trump was elected president, they became activists.

“If we eliminate DACA and take DACAmented teachers out of the classrooms, our students are definitely going to suffer,” he said. “But I know, I know, I know — I’ve seen it — that they’re transforming into advocates and activists, so I know they, too, will fight with us.”

That fight may be an uphill battle. Immigration reform has stalled for years in Washington, and it’s already hit several snags since the Trump administration announced it would rescind DACA. A Senate Judiciary Committee hearing, scheduled for Wednesday to discuss the issue, was canceled earlier this week. Rep. Bob Goodlatte, Republican of Virginia and chairman of the House Judiciary Committee, told The New York Times the House has prioritized legislation that targets immigrant gangs and border security.

“We are happy to have discussions with anybody who wants to talk about what we need to do with DACA, but I would say DACA is at the end of that list, not at the beginning,” Goodlatte said. “We can’t fix the DACA problem without fixing all of the issues that led to the underlying problem of illegal immigration in the first place.”

But Edelman, whose group launched a pro–DREAM Act petition garnering signatures from more than 3,400 educators, sees a potential opening come December, when congressional Democrats could use debt ceiling negotiations to leverage the DREAM Act.

Despite polls that indicate that a majority of Americans support protections for Dreamers, action requires “putting our own bodies on the line,” said Greisa Martinez, advocacy and policy director of the advocacy group United We Dream, who joined the call Tuesday.

“If you ever asked yourself what you would be doing in the Civil Rights Movement,” she said, “the answer is whatever it is you’re doing right now.”