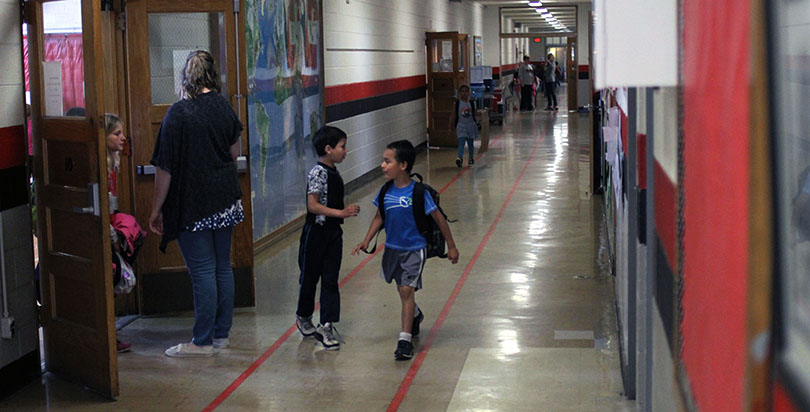 This is the third article in a series produced in collaboration with The Guardian examining the climate affecting immigrant school children and their parents as the new school year begins. See a version of this article at TheGuardian.com.
Gathered around a camera in their family’s kitchen, the four Duarte children pleaded for help. When their undocumented parents were picked up by border patrol agents outside their home in National City, California, the full-time students, ages 12 to 19, were unable to pay for food, let alone rent.
Yarely and Aracely, 12-year-old twin sisters, had watched it happen. The girls were eating breakfast last May when their father, an undocumented immigrant from Mexico, went outside to grab a newspaper and was swarmed by U.S. Immigration and Customs Enforcement agents. When their mother went outside to investigate all the commotion, she, too, was arrested.
“It was pretty traumatizing for my little sisters,” said 19-year-old Francisco Duarte, the oldest of the four siblings. “They just took them right in front of them. One day everything was normal, and the next day, my parents were gone.”
To raise money for their living expenses and their parents’ legal fees, the children, who are all U.S. citizens, launched a GoFundMe campaign and released a Youtube video about their experience. 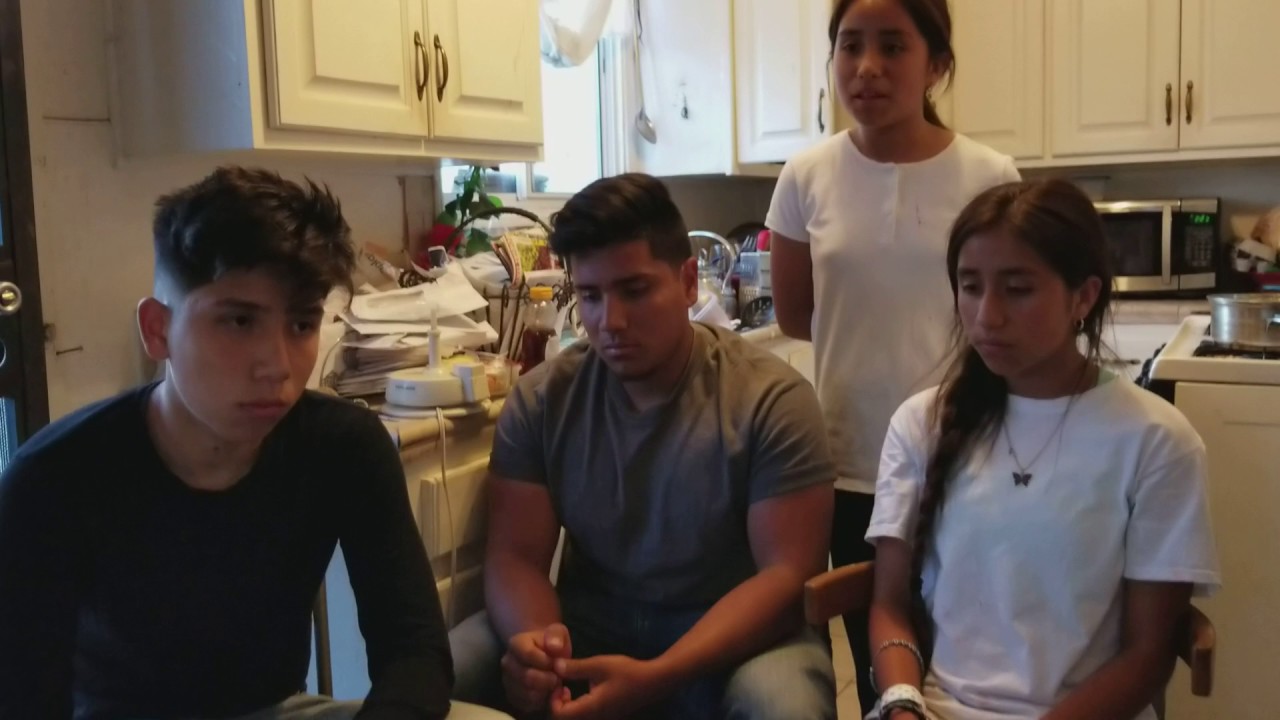 For the estimated 1 million undocumented children in the U.S. — and the roughly 4.5 million young people born here who have at least one undocumented parent, like the Duartes — President Trump’s immigration crackdown is creating high levels of psychological distress. As students head back to school this fall, school officials from New York to New Mexico are preparing for increased anxiety and absenteeism among students of immigrant families.

“Kids start lagging behind academically, having social stress, anxiety, depression,” said Lisseth Rojas-Flores, an associate professor of marital and family therapy at Fuller Theological Seminary in California. “With the new administration and all the threats for deportation that are so vivid and so real, and all the rhetoric that’s going around, the anxiety escalates to a point that can be very paralyzing for some of these kids, who don’t want to go to school, or who go to school and sit in there and still worry about their families.”
Across the country, school administrators are taking bold steps to protect students and their families. Superintendents and school board members from districts including Miami; Milwaukee; Chicago; New York City; Des Moines; Portland, Oregon, and many others are declaring their schools “sanctuaries” from Trump’s immigration policies. While these policies vary, sanctuary schools are offering workshops to students and their families about managing visits from immigration authorities, vowing to shield students’ personal data from officials, and promising to block federal agents’ access to school property unless they present a warrant.
(The 74: As Immigrant Students Worry About a New School Year, Districts & Educators Unveil Plans to Protect Their Safety — and Privacy)
Since Trump took office, immigration arrests have increased 38 percent, and deportation orders have climbed 31 percent. Because more than 90 percent of those detained and deported are men, many immigrant families are losing their breadwinners, with the very real possibility of economic hardship.
“We are seeing more and more students dropping out,” Tania Romero, a social worker at Flushing International high school in Queens, New York, said at a panel discussion in May. “Young people are choosing to leave schools to work and save money in case they’re deported anytime soon.”
In a statement, a spokeswoman for Immigration and Customs Enforcement, Jennifer Elzea, said the agency was committed to ensuring that enforcement actions did not “unnecessarily disrupt” undocumented parents with underage children — but that authorities “will no longer exempt classes or categories of removable aliens from potential enforcement.”
(The 74: Immigration Agents Inside Schools? Why Some Activists Are Warning Undocumented Students About Trump’s Policy Shifts)
In the wake of the Duarte family arrests, immigration officials defended their actions in the face
of widespread local protests. Authorities said the children’s parents, Francisco Duarte-Tineo and Rosenda Perez-Pelcastre, were connected to a stash house for human smuggling. The family denied those allegations, and no criminal charges have been filed. Perez-Pelcastre was released on bond in June with an ankle bracelet, but the children’s father was denied bond.
A July report by the Center for American Progress, a progressive think tank, found that emotional distress and economic insecurity can derail the future success of undocumented children and those with undocumented parents, as families are separated and immigrant communities are targeted by heightened enforcement.
The symptoms are most profound among those — like the Duarte family — whose parents have direct contact with the authorities, according to research by Rojas-Flores. 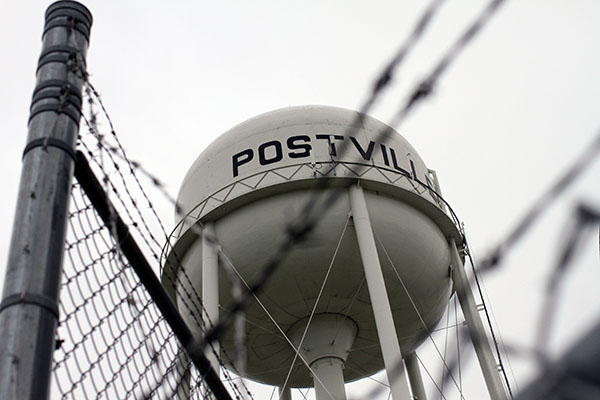 Postville, Iowa, became the staging ground in 2008 for one of the largest immigration raids in U.S. history. The bust remains an omnipresent force in the town's schools.
Photo: Mark Keierleber
The lessons of Postville
Postville, Iowa, has become a destination for researchers looking to study the effects of immigration enforcement on youth. The small farm town of roughly 2,000 became a staging ground for one of the largest immigration raids in U.S. history near the end of the school year in 2008, when immigration agents descended on the town in helicopters, SUVs, and buses. They arrested 389 workers at a kosher meatpacking plan, to cries of “la migra, la migra.”
After arrests, criminal convictions, and deportations, the community was left in shambles. Immigrant families not displaced by the raid skipped town in fear. Many of the high school’s current upperclassmen were young children when the raid took place; one teen recalls 19 children hiding — for weeks — in the family’s basement. Others claimed sanctuary in a local Catholic church.
The raid had far-reaching effects on the student population. In a 2011 report, researchers at the University of Northern Iowa documented that students stopped coming to class, while schools found increased behavioral issues among the children who remained.
A report in the International Journal of Epidemiology recorded how heightened anxiety from the raid affected Postville’s Latino children before they were born: Nine months after the incident, babies born to Latina mothers were 24 percent more likely to have a low birth weight than those born the previous year.
‘La Migra’
Though it’s been nearly a decade, the 2008 raid haunts Postville’s youth, and Trump’s immigration crackdown has renewed anxiety. After immigration agents made an arrest in a neighboring town this spring, fear echoed through classrooms and school hallways over rumors that ICE had returned to Postville.
The high school principal contacted federal authorities and announced over the intercom that no enforcement activity had been confirmed in Postville. But still, kids were afraid to walk home, said Joy Minikwu, the district’s English as a second language instructional coach.
A school official’s undocumented mother barricaded the front door to her home and hid inside. Others packed their bags and fled.
One student said he went into “alert mode” every time he spots a helicopter. Another told his neighbor, first-grade teacher Lisa Acevada, about his plan should the government deport his parents back to Guatemala: “Mom and Dad said that if they’re taken, we’ll have to live with you.” 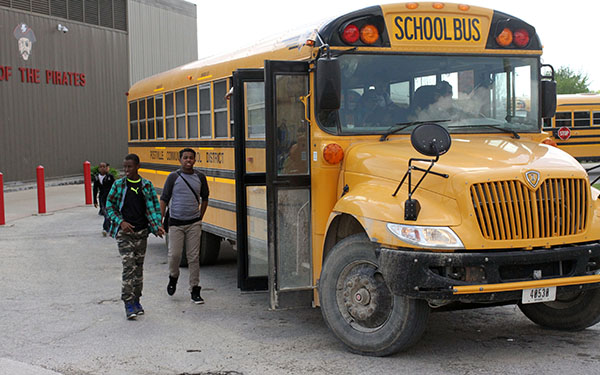 Students in Postville, Iowa, board buses at the end of a school day last spring. Shortly after President Donald Trump called for ramped-up immigration arrests, a rumor circulated around town that federal agents had returned to their community.
Photo: Mark Keierleber
Noe Gonzalez, a 14-year-old freshman born in Iowa to undocumented Mexican immigrants, said the thought of his parents being deported preys on his mind. “I don’t know what would happen, if I would be deported too or if I’d go to a foster home,” he said. “I’d like to stick with them, but yet I don’t want to leave the U.S.”
In response to this heightened anxiety, educators in Postville and elsewhere have worked to find ways to protect their students. Minikwu said she approached school leaders and pushed them to create a concrete emergency plan, should federal agents ever return. Details are still being discussed.
“My concern is that if something like this were to happen again and we’re taken off guard again, it’s our own fault for not being prepared,” she said. “I think it’s something that is pertinent to our families and for us to be as good of a support as we want to be.”
Submit a Letter to the Editor
August 23, 2017