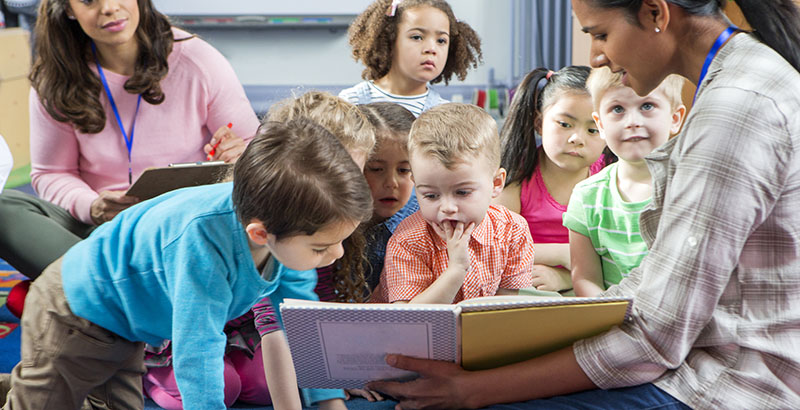 After a flurry of proposals early in the presidential primary campaign, as predicted, public education reassumed its usual place near the bottom of the national political hierarchy. The dynamics followed the normal pattern from recent years. While plenty of the presidential debates — and intervening media coverage — featured discussion of higher education affordability and the corresponding student loan crisis, the nation’s elementary and secondary education system remained largely outside the scope of the campaign.

One big exception? Early education. Nearly every Democratic presidential candidate proposed major public investments in young children. Early in the campaign, Sen. Kirsten Gillibrand (D-NY) proposed to expand the Child and Dependent Care tax credit to help bring down the cost of child care. Sen. Elizabeth Warren pitched a wealth tax on fortunes of more than $50 million to cover universally accessible child care and pre-K that would be fully subsidized for families with incomes below 200 percent of the federal poverty line. Most of the remaining 342 candidates (give or take) followed suit, promising a raft of programs to support maternal health, child development, kindergarten readiness and universal, high-quality care for young children.

Expanding access to early childhood education, particularly universal pre-K, has been a progressive priority for decades. It’s a policy area that raises fewer hackles between different factions of the left, and even boasts some support from conservatives. Perhaps it’s an idea whose time has finally come?

This campaign season’s early excitement built on momentum generated by the Obama administration, which made a wide range of early childhood commitments from home visiting programs and nurse-family partnerships to child care and pre-K programs. Many of these began at the start of President Obama’s term, when Democrats used their control of both houses of Congress to build expanded federal early education investments into federal economic stimulus efforts.

Once Republicans took control of the House of Representatives in 2010, and then the Senate in 2014, progress on expanding access to these programs slowed significantly. Obama called for more federal early childhood investments in his 2013 State of the Union address, and the administration’s subsequent push for Pre-K for All attracted glimmers of Republican support but never got meaningfully close to passage.

Obama’s plan would have raised taxes about one dollar on cigarette packs to establish federal pre-K grants available to states willing to contribute some pre-K funds of their own. The pre-K plan put forward by presumptive Democratic presidential nominee Vice President Joe Biden appears similar to that federal-state partnership. It would also increase funding to provide child development specialists in health centers and to fund regular home visits where these specialists support families of young children.

But there are some signs that shifting politics — and economics — are changing policy thinking around early education. For years, early education advocates (including me) pushed for expanded pre-K access because of the research consensus showing that high-quality programs can significantly improve children’s long-term academic trajectories. We argued, following the work of economists like Nobel laureate James Heckman, that public education interventions are most effective in the early years.

The promise of early childhood investments is real. But rhetoric about the ease of launching and growing large-scale, high-quality programs has often overpromised what these programs have historically been able to deliver. In recent years, we’ve learned more about some of the obstacles to delivering that quality at scale. Both New York and Washington, D.C., for instance, have had challenges monitoring safety in expanded early education systems. And notwithstanding the high costs of early care for American parents, the country has historically paid teachers in these settings very little. Experts say that this makes it difficult to attract and retain early educators with strong literacy and language skills. Without a ready supply of trained, talented teachers to staff pre-K classrooms, efforts to expand pre-K will struggle to ensure that new classrooms offer high-quality instruction.

What’s more, young families’ escalating challenges reaching — and remaining in — the middle class often require all adults in the household to work. Many of these families can’t afford to keep a parent home to handle full-time child care for the first three to five years of a child’s life.

To that end, advocates for larger investments in early education are increasingly attending to the ways that these programs fit into U.S. labor markets. For instance, Sen. Bernie Sanders (I-VT) outlined an early education plan that would have paid lead early educators the same as peers who teach kindergarten. In theory, this bump in teacher pay ought to shift the labor market for early educators to attract more highly trained, highly credentialed adults interested in working with young children.

Sanders’s plan was also designed around supporting working families’ efforts to keep parents on the job as their kids grow up. It specifically promised to provide 10 hours of free child care for every American child each day, even for families who need coverage outside of the standard 9-to-5 workday. Like Biden’s plan, it also called for greater funding for home visiting programs.

Perhaps this shift is appropriate for a moment when a global health crisis is locking up the country’s economic gears. Released last week, the annual State of Preschool report points to tax revenues and public funding for existing educational programs shrinking with our deepening recession, meaning advocates will need to make a more comprehensive case for new early education programs.

It’s important to give children a boost by means of high-quality early education instruction, but that may be less important than focusing on how these programs can provide stable middle-class employment to early educators — and give parents affordable care options that allow them to work.

That’s not the same as easy assurances that early education programs can solve every educational problem the country faces — and at a stunningly low cost! No, it’s a more honest, sober and serious treatment of the valuable work involved in building systems that can deliver on early education’s potential. That could be an early education revolution — one that would deliver some real results.