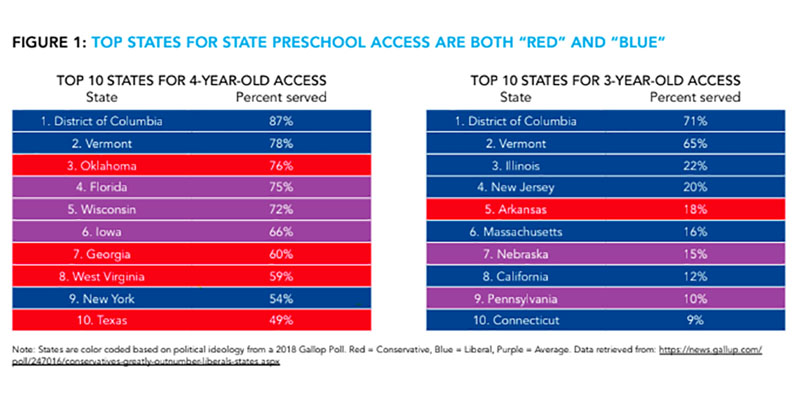 As the economic damage wreaked by coronavirus becomes more severe, prominent advocates for early childhood education are urging the federal government to send more funding to state pre-K programs. Unless national assistance is equal to the economic and medical threats posed by COVID-19, they say, the damage to young children could be lasting.

The warning is embedded in a new report from the National Institute for Early Education Research, released today. The research and policy group, operating within Rutgers University since its founding in 2002, offers widely circulated analyses aimed at improving early childhood initiatives around the United States. Its annual State of Preschool dispatches include state-by-state profiles of publicly funded pre-K programs, along with recommendations for heightening quality and expanding access.

This year’s State of Preschool, measuring developments in the 2018-19 school year, comes at a time when thousands of public and private pre-K and day care programs have been shuttered thanks to the coronavirus outbreak. As state and local tax budgets are battered by the collapse of income and sales tax revenues, and as demand for public assistance like unemployment insurance grows exponentially, some worry that cuts to state-funded pre-K will inevitably follow.

Rutgers economist Steven Barnett, a founder and co-director of NIEER, told reporters on a media call that state policymakers must heed the lessons of the Great Recession, when abrupt fiscal shortfalls led many states to slash funding to public education at all levels. Some had only begun to emerge from their periods of austerity when COVID made its presence felt.

“We know that in the last recession, enrollment, spending and quality standards were cut, and that spending impacts continued well after the economic recovery was underway,” Barnett said. “In fact, the impact of those cuts continues: Pre-K’s long-term growth rate remains lower than before the Great Recession, and some standards reductions have not been fully reversed.”

Forty-four states and the District of Columbia maintain public pre-K initiatives that enroll some 34 percent of all American 4-year-olds, though the programs vary greatly in eligibility and funding. Ten different jurisdictions — including big states like Texas, New York and Florida — provide publicly subsidized preschool to at least 49 percent of their 4-year-olds, with Washington, D.C., topping the list at 87 percent. Another nine states serve at least 10 percent of their 3-year-olds with public pre-K.

But access continues to thwart even well-intentioned and generously funded programs. According to the report, roughly 2 in 5 children from families making less than $10,000 per year do not attend any center-based preschool before kindergarten, though they are all eligible to participate in the federal Head Start program.

“Pre-K needs to grow and improve, not just hold on,” Barnett observed. “It’s not like K-12, a mature program where every child is entitled to go … When pre-K quality is low, it’s not because agencies and programs don’t want to do better; most are doing the best they can with what they have, but that’s already too little, and our data make that clear.”

Those issues could be exacerbated by a prolonged recession that closes thousands of pre-K programs nationally. Already, reports have surfaced of respected pre-K providers struggling to make ends meet and avoid laying off longtime educators as their incomes shrink during the COVID shutdown. While some states have allowed preschools to remain open throughout the crisis, many have elected to shut their doors out of fear of the disease’s rapid spread.

To combat the possibility of a long-term shrinkage in the early education sector, the NIEER report recommends that Congress provide states with dedicated funding and stepped-up federal-state coordination as the shutdown continues; that state preschool programs build out new policies to rapidly provide emergency education services, particularly to low-income students; and that each state proactively develop realistic game plans to expand pre-K to include all children.

While K-12 school systems have adopted virtual learning out of necessity during the past month of coronavirus shutdowns, Barnett warned that younger children are more likely to flounder in the absence of personal contact with their teachers.

“Technology is one important tool for early education, but computer programs are not a substitute for real preschool any more than the wooden puppet Pinocchio was a real boy. Young children learn best through hands-on activities engaged with adults and other children. We need to figure out how to make that happen, even with remote preschool.”