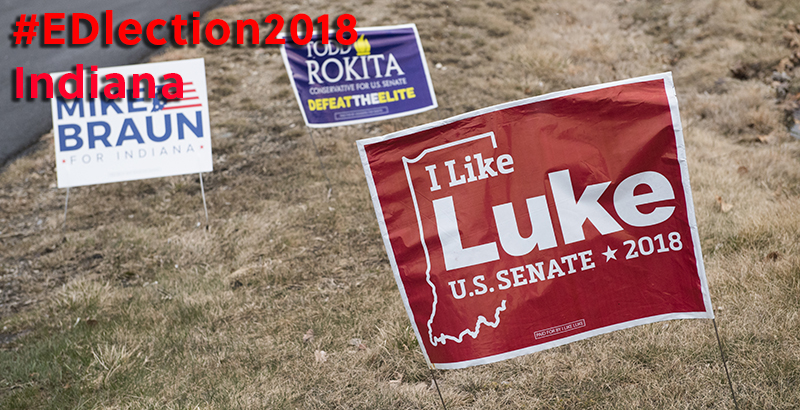 Signs for Mike Braun, Reps. Todd Rokita, R-Ind., and Luke Messer, R-Ind., who are running for the Republican nomination for Senate in Indiana, are seen outside the Steuben County Lincoln Day Dinner in Angola, Ind., on April 4, 2018. (Credit: Tom Williams/CQ Roll Call)

This is the latest education-oriented campaign we’ve profiled in our ongoing #EDlection2018 series. See our complete coverage of the 2018 elections — including key races in Florida, Georgia, California, and beyond — at The74Million.org/Election.

The ad features elementary-school-age boys in matching outfits, the standard politician getup of black suits, white dress shirts, red ties, and neatly combed-over dark hair, shouting at each other, “No, I’m the senator!” “No, you can’t be the senator if I’m the senator!”

The boys, ostensibly campaigning for student government, are stand-ins for Reps. Todd Rokita and Luke Messer, portrayed as indistinguishable D.C. insiders. Businessman Mike Braun, their opponent and a self-styled outsider in the Indiana Republican primary for U.S. Senate, meanwhile, is shown in kid form sitting in the back of the class, ignoring them and reading an economics textbook.

It’s the second such ad by Braun. A successful March commercial in which he toted around cardboard cutouts of Messer and Rokita and asked passersby to tell the difference (they couldn’t) helped him break through the noise of the campaign and past his more recognized opponents, experts said.

Braun’s more recent “my opponents are identical creatures of the D.C. swamp” ad marks perhaps the most prominent nod to schools or education in a campaign that could have had a lot of it.

Messer, after all, founded the Congressional School Choice Caucus and has been a vocal champion of Education Secretary Betsy DeVos and her push for more choice options.

Rokita is the chairman of the subcommittee that oversees K-12 education and was a key force in passing what became the Every Student Succeeds Act.

Instead, experts said, as often happened in recent elections for federal office, K-12 education fell by the wayside in favor of old-school dirty politics, with a side of economic issues, and, as ever, Donald Trump. All three candidates embrace the president’s agenda.

“It certainly doesn’t feature in their ads, which are more about the kind of bread-and-butter issues you’d expect [like jobs and trade], also supporting President Trump. There’s not much about education at all,” said Leslie Lenkowsky, professor emeritus of public affairs at Indiana University.

Some education issues did come up briefly in an April 15 debate, the Indianapolis Star reported: All three said they’d favor arming teachers at school, and Rokita attacked Braun as a Democrat for his support of the Common Core State Standards when he was a local school board member.

The winner of the May 8 primary will face Democratic Sen. Joe Donnelly in November in a contest most independent handicappers rate as a toss-up and one that could play a part in deciding which party controls the Senate.

The race has turned out to be, in short, “nasty,” Lenkowsky said.

Messer, Rokita and Braun have been criticized, respectively, for living out of state, mistreating staff, and voting as a Democrat.

All three attended the same college — Indiana’s Wabash College, one of only three all-male colleges in the country — though Braun was there years before Rokita and Messer. The congressmen have been circling each other, sometimes at odds, in Indiana political circles since the early ’00s, Politico reported in an August article dubbing their race “the GOP’s nastiest primary.” That animosity touched education, too, as Politico and others have reported, with Messer’s advocacy for new school choice measures, such as vouchers, temporarily derailing progress on what became ESSA, the law Rokita helped write.

It’s hard to tie education, an inherently state and local issue, to a campaign for federal office, particularly among Republicans anathema to interference from D.C., but there are plenty of recent issues that could have risen to the fore.

Congress expanded 529 college savings plans to cover private K-12 tuition in the recent tax bill, and Messer is now pushing to expand it again to cover homeschool expenses after it was taken out in the legislative machinations over the final bill. Indiana policymakers have seesawed on whether to expand preschool with federal dollars. There’s a long-overdue rewrite of the Higher Education Act. And any candidate could conceivably hold up Indianapolis public schools as an innovative example that education reformers are highlighting as one for other districts to consider.

Three weeks out from the primary, it seems to be anyone’s game.

There is little reliable polling, and Braun seems to be gaining support, but it’s unclear whether he’d pull votes from Rokita or Messer, said Marjorie Hershey, a political science professor at Indiana University.

“There are undoubtedly a lot of people who are mobile in terms of candidate preference,” she added.

The GOP candidates collectively have raised about $8.7 million and spent $5.6 million. Those figures include Messer’s fundraising and spending through March 31 of this year but Rokita’s and Braun’s only through the end of 2017, so the totals are likely to rise. Donnelly, meanwhile, had raised $7.4 million and spent $3.4 million as of March 31.

Though Messer seemed to have an early lead, stories about his living in greater Washington, D.C., rather than Indiana seem to have dulled his star a bit, experts said, noting that similar residency issues helped fell six-term senator Dick Lugar in the 2012 Republican primary and defeat Sen. Evan Bayh in his 2016 bid to return to the Senate after retiring. (Messer has said it’s important for him to be near his teenage children full time.)

“There’s certainly precedent for people expressing concern about someone not residing in the state and running for re-election and election,” Hershey said.

The outcome of the general election is just as murky.

Political winds seem to be blowing in Democrats’ favor this year, and Donnelly is the type of centrist Democrat who could do well in Indiana, particularly among Republicans put off by the partisan spats during the primary, Lenkowsky said.

But political events are shifting rapidly, Democrats are defending a half-dozen vulnerable Senate seats, and Donnelly’s 2012 victory came over a much weaker candidate. Indiana voters picked an unnamed Republican over Donnelly 51–45 in a poll earlier this year.