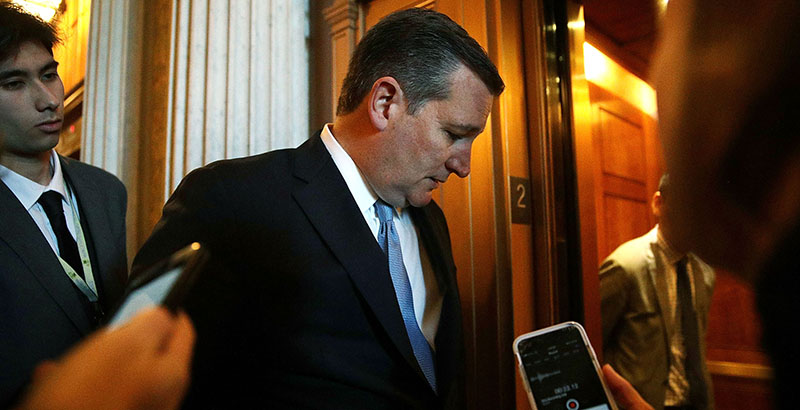 U.S. Sen. Ted Cruz (R-TX) speaks to members of the media at the Capitol on Dec. 1, 2017, in Washington, D.C. Senate GOPs indicate that they have enough votes to pass the tax reform bill. (Photo credit: Alex Wong/Getty Images)

The provisions, which were removed in late-night debate, would have expanded 529 savings accounts to cover homeschooling expenses, and exempted colleges where students don’t pay tuition from a new tax on large endowments. GOP leaders were also forced to change the name of the bill before sending it back to the House, where it passed Wednesday afternoon.

A Senate rule, named after the late senator Robert Byrd, prohibits “extraneous matter” from being included in budget reconciliation bills. That’s the fast-track procedure that let Republicans pass the bill quickly — and with just 50 votes rather than the 60 usually required. Senate Democrats raised the concerns, and the chamber’s parliamentarian, an adviser on Senate rules, made the final decision.

Sen. Ted Cruz, Republican of Texas, who sponsored the 529 provision, took to the Senate floor to rail against the change, arguing that Democrats are “discriminating” against homeschoolers.

“Why? Because the Democratic Party can’t stand the audacity of a parent who would take it upon himself or herself to educate their child free of centralized control,” Cruz said late Tuesday night.

There were an estimated 1.8 million children homeschooled in 2012, according to the most recently available federal statistics. That’s about 3.4 percent of the school-age population, an increase from the 1.7 percent of students who were homeschooled in 1999.

In an interview with Fox News Wednesday morning, Cruz agreed with a host’s assessment that Democrats, none of whom voted for the final measure, raised concerns about the homeschooling provision to cater to teachers unions.

Sen. Ron Wyden, the ranking Democrat on the Finance Committee, which wrote the GOP-led tax bill, said that federal support of homeschooling amounted to a “major policy” change in violation of the Byrd rule.

“There is no question that there are parents who want to homeschool their kids. I am certain that many of them are very conscientious. Yet this is the first time the federal government would provide federal support for homeschooling. That is why the parliamentarian ruled against [the provision],” Wyden said.

Not all homeschooling advocates are as upset as Cruz.

Jeff Weston, executive director of the National Homeschool Association, said that while it’s “unfortunate” the provision was removed and it would have helped homeschooling families in the short term, in the long run, the assistance likely would have meant more government interference, like testing requirements or home visits.

“Whenever the government does something nice for a group, it always comes with strings,” Weston said. Instead of tax benefits, Congress should pass a law guaranteeing parents the right to raise their children how they see fit, he said.

Each state sets its own rules governing whether parents must notify local school officials they plan to homeschool, the subjects homeschoolers must cover, when children must take tests, and other issues. Child welfare advocates say they’re key to preventing abuse and making sure children are receiving adequate education; homeschooling advocates say the government should remove itself from family affairs.

How Do You Monitor Homeschooling Parents? Welcome to the Wild West of Education Regulation

“Most of the homeschoolers that I know would just as soon that the government stay out of their business entirely,” Weston said.

Although the homeschooling provision was removed, the bill keeps the expansion of 529 savings plans for private K-12 tuition. Cruz in the Fox interview called it “the most far-reaching federal school choice legislation ever passed.”

Education Secretary Betsy DeVos said Tuesday that the expansion was a good first step but wouldn’t do enough to help low-income families who can’t save the money up front.

“Anything that empowers parents and gives them more opportunities is a good thing, but it doesn’t address the needs of parents who are from lower incomes and does not empower them in significant ways. That has to continue to be an important consideration on our radar screen,” she told reporters after a “Rethink K-12 Education” summit.

The expansion, coupled with new limits on federal deductions for state and local taxes, may even hurt students in low-income schools in the end, according to one conservative education scholar.

In addition to the new federal exemption for K-12 private school expenses, many states offer state tax exemptions for 529 plans, which until the new tax bill had only allowed families to save for college. That state tax break for 529 accounts reduces the same state tax revenues that aid low-income schools, Nat Malkus, deputy director of education policy at the American Enterprise Institute, wrote in The New York Times.

In New York, where 465,000 students attend private schools, the blow to state tax revenues from taxpayers with 529 accounts might be as big as $3 billion, he calculated. Though the tax bill allows only $10,000 in state and local taxes to be exempted from federal taxes, other states allow for larger deductions on state taxes, and some exempt 529 contributions from state taxes entirely, Malkus wrote.

“The easiest fix is to eliminate the 529 expansion, a federal action that transfers state tax dollars from the poor to the rich and which won’t substantively increase school choice for those who do not already have it,” he wrote. “Doing so would be a principled stand for the party that professes to protect state sovereignty. Not doing so will affirm the worst caricature of Republicans and education — taking money from the poor to give to the rich.”