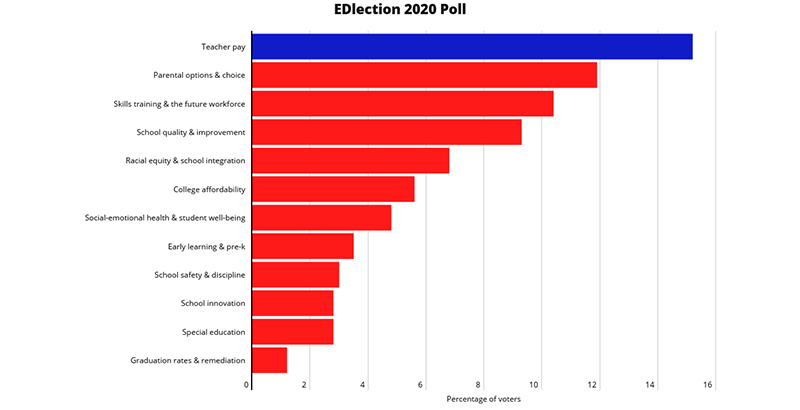 More than 600 people across the country responded to an online survey published by The 74 asking them what education issue they most wanted to see addressed at the upcoming Democratic presidential debate, with teacher pay topping the list.

Of the poll’s 12 possible topics the Democratic contenders could debate July 30 and 31 in Detroit, teacher pay received the greatest response, with 15 percent of the vote. Parental options and choice garnered 12 percent, and skills training and the future workforce came in third with 10 percent. Most readers who responded identified themselves as teachers, administrators and parents.

Many left impassioned comments, describing how teachers are fed up with low pay and poor working conditions. Some wrote about their personal struggle to make ends meet after earning multiple teaching degrees. One commenter said she thought raising salaries could help diversify the teaching force. More than half of public school students are minorities, while roughly 80 percent of teachers are white.

“If we can make teacher pay better, we will naturally get a more diverse population interested in teaching as a career. More teachers, better teachers, and more diverse teachers will make our educational system stronger,” said Megan Altman, an administrative office manager at the Winter Sports School, a college prep charter school for winter athletes in Park City, Utah.

Charters Employ More Diverse Teachers Than Traditional Public Schools. Is It Giving Them a Leg Up With Minority Students?

Last year, a wave of teacher strikes and walkouts drew national attention to the issues of teacher compensation and school funding. Both have figured prominently in the campaigns of several of the Democratic candidates, including former vice president Joe Biden, Senators Kamala Harris and Bernie Sanders and former congressman Beto O’Rourke. All have released education plans, some more extensive than others.

Harris announced in March that she would give the average teacher a $13,500 raise, which amounts to a 23 percent increase in base pay. Her campaign estimates that the pay raise will cost the federal government $315 billion over 10 years and will be paid for “by strengthening the estate tax and cracking down on loopholes that let the very wealthiest, with estates worth multiple millions or billions of dollars, avoid paying their fair share.”

Williams: Kamala Harris’s $315B Teacher Pay Raise Has Merit, but Is It the Best Way to Improve Education for Poor Kids?

Biden said he would triple Title I funding for high-poverty schools, requiring districts to use some of that money to raise teacher salaries. Though his campaign has not offered a specific figure for minimum salaries or overall raises, Sanders proposes working with states to set a $60,000 minimum starting salary, adjusted for cost of living and years of service.

O’Rourke is the latest Democratic candidate to release a plan proposing to pump more dollars into education. His campaign promises to create a $500 billion Permanent Fund, incentivizing states and districts to “guarantee fair funding for public schools and pay teachers professional wages.”

Sen. Elizabeth Warren has yet to release a K-12 education plan, though she has gained attention for her plans for universal free college and canceling student debt up to $50,000.

Another issue popular among respondents was parental options and choice, coming in second place after teacher pay. Although school choice options such as tax credit scholarships or vouchers have been largely ignored, charter schools have been the focus of much criticism among the Democratic candidates, even while they remain popular among black and Hispanic Democratic voters. Sanders would ban for-profit charters and cut off federal funding to all charters pending an audit, while Warren, Biden and O’Rourke, whose views were once more favorable, have now distanced themselves. All the Democrats are courting the endorsement of the national teachers unions, which strongly oppose charter schools, which are publicly funded, independently run and typically not unionized.

One anonymous poll respondent, who identified as someone who works outside of the education sector, wrote that parental choice is closely tied with school accountability.

“Parents should have the option of quality schools that prepare students for a career or college when they graduate from high school — not to have remedial classes, that don’t count for college credit. We need accountability within our schools,” they wrote.

The third-highest-ranked category — skills training and the future workforce — was selected by a wide array of people, including parents, advocates, policymakers, teachers and nonprofit workers. Many respondents who chose skills training commented on a secondary factor that influenced their choice: the rising cost of college and crippling student debt.

One respondent, who also chose not to leave their name, felt that improving skills training in schools could provide students with more options, steering them to make better decisions about their future.

“College for all has left many first-generation students of color with no degree and challenging debt levels. Our schools need to do a better job of preparing students for the workforce so that they can make good decisions and choose the college/career pathway that is most promising for them.”

The ‘Middle Skills’ Gap: Half of America’s Jobs Require More Than High School Diplomas but Less Than 4-Year Degrees. So Why Are They Under So Many Students’ Radars?

About 23 percent of respondents chose to write in an education issue of their choice. While this “other” category produced a variety of reader responses, including charter schools, equitable funding, bullying and standardized testing, most of those who wrote in an issue cited professional learning for teachers and administrators.

Biden has proposed additional compensation for teachers who are able to mentor and coach other teachers. Under his plan, teachers would be able to “earn an additional certification in a high-demand area — like special education or bilingual education — while they are still teaching” without accumulating additional debt.

Similarly, Sanders said he would offer professional development for all teachers, including continuing education and mentorship programs, though his plan does not specify exactly how this would be done.

More than half of the poll participants took time to elaborate on their answer, giving The 74 valuable insight into what readers care most about in terms of education. Here’s a taste of what some of you told us about the issues you feel are most important to debate on a national level:

“Our current model of education, especially in high schools, does not reflect what students need in order to be successful in the future. Schools are partially held back from innovating because of the narrow accountability structures (i.e., standardized tests in reading and math). How will the next candidate encourage innovation, with a focus on equity, in our schools?” wrote Nicole Erb, who was most recently the curriculum and instruction supervisor for Detroit Public Schools Community District.

“Ensuring that students are getting EQUITABLE resources, regardless of race, class, or zip code, is essential to dismantling systemic oppression in this country and promoting overall wellness. Quality education for all is good for everyone, especially given that access to education is inextricably linked to things like access to housing, health care, nutrition, and opportunities within the workforce,” wrote Erica Lipoff, director of impact for KIPP New Orleans Schools.

“I think school quality and improvement is an umbrella for everything else on the list. It is the basic and fundamental goal that ALL candidates and elected officials should fight for. KIDS NEED TO COME FIRST, regardless of what kind of school you prefer, what party you are in, and what your socio-economic background is. When school quality is the goal with a focus on children, the rest of the items on your list should fall into place,” wrote Antonio Gonzalez, an Evanston, Illinois, resident who works for a company that develops charter school facilities.

The 74’s unscientific online poll ran from July 16 to July 24 and tallied 605 responses. We asked readers to answer an optional question identifying their role in education; 575 of them did. Of those, 30 percent identified as educators, 22 percent as parents and 10 percent as administrators.