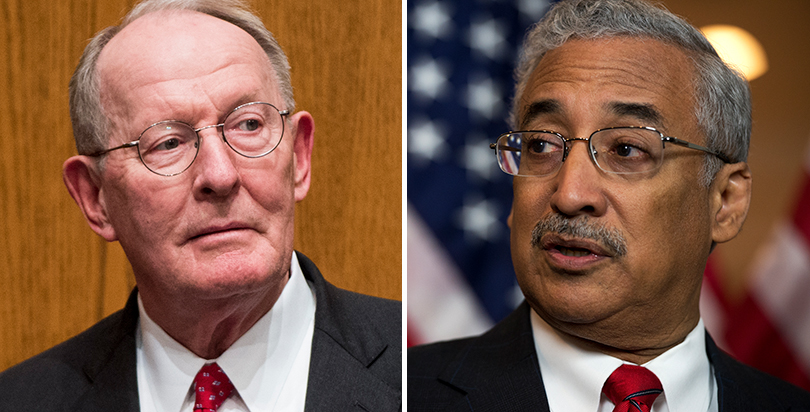 The decline of bipartisan geniality in K-12 education policy debate following the Every Student Succeeds Act continued to implode Tuesday, as two congressmen gave wildly different, often contradictory speeches to the nation’s top education leaders.
Republican Sen. Lamar Alexander and Democratic Rep. Bobby Scott addressed the Council of Chief State School Officers, detailing starkly different visions of the post-ESSA reality. For Alexander, 2017 marks the beginning of a new era of innovation led by states freed from overreaching federal bureaucracy; for Scott, America now finds itself in freefall, backsliding to a time when states ignored the education of children of color, English-language learners, and others outside the majority.
Alexander, the chairman of the Senate Health, Education, Labor and Pensions Committee, addressed this widening divide at the outset, opening his remarks with a pointed note on how far the ESSA coalition has fallen in the year since the law’s passage. Even though ESSA became law just 15 months ago, he said, it feels like 100 years, “given the current political environment.”
Alexander: We rolled back DOE interference — and returned power to states
Alexander defended Republicans’ decision to overturn Obama administration regulations implementing the law’s accountability provisions, a move Democrats said damaged the bipartisan education coalition. “That took us back into a partisan disagreement, which I regretted, but just so you have my view on it: My view is that Congress writes the law, not the U.S. Department of Education,” he said.
The regulations had seven provisions that explicitly violated the law, and another 16 that in Alexander’s view “were outside the authorization of the law,” he said.
He referred specifically to the law’s requirement that 95 percent of students participate in the standardized tests used to create the majority of a school’s rating. The law said states are responsible for holding schools to that threshold and for including that participation rate in accountability ratings, but the regulations had several new federal mandates, he said.
(The 74: The ‘Miraculous’ Rise and Ugly Fall of ESSA: Is Congress’s Education Coalition Too Broken to Tackle Higher Ed?)
The Trump administration has released a new state plan template, he added, that should allow states to continue to submit plans on schedule. People who work in government tend to be risk-averse, but states should take advantage of the new flexibility, he urged.
“I would recommend … decide what you think would be best to do, and then see if it fits what the law says. Probably it does, the way we wrote it,” Alexander said.
Democrats have said ending the accountability rules leaves too much wiggle room for states and doesn’t adequately uphold the law’s civil rights “guardrails” that attempt to guarantee an adequate education for students of color, children with disabilities, English-language learners, and others historically not well-served by schools.
Alexander refuted that idea.
“Some people misguidedly say there’s not accountability: there’s state accountability, and to me, that’s the best accountability, because if we really want something done, it has to be done locally,” he said.
Scott: We gutted regulations — and now fear states may lose sight of equity
Whereas Alexander’s remarks were cheerful about the law facilitating local innovation, Scott’s were pessimistic that the federal government was softening on educational equity.
The country is at a crossroads, Scott said, and while the flexibility guaranteed in the law could result in good decisions from states, it could also make bad decisions possible.
“I must admit the early actions of the Congress and the [Trump] administration have made me more doubtful than optimistic,” he said.
Scott argued that regulations are vital to implementing ESSA and that Congress’s resolution blocking the accountability rules endangers the new law.
“It’s impossible to have a law like this without any regulation … [ESSA] is too big, the changes we made too dramatic, the flexibility too new, and the stakes too high to leave states and schools with no more guidance than just the legislative text,” Scott said.
He urged the assembled state education chiefs, who play a major role in drafting plans for how states will implement the law, to commit to strong equity provisions, particularly because the Trump administration likely won’t adequately enforce the law at the federal level.
Scott also cited President Trump’s “skinny budget” proposal released last week that calls for big cuts to many education programs. (More here on the fine print.)
“Instead of committing to fund ESSA implementation and public education, the administration wants you and the school districts to shoulder the burden of new federal requirements without the necessary federal investment,” he said.
Alexander, too, was asked about the budget, specifically money for ESSA’s Title IV programs, which would be a broad block grant to states for things like technology, a well-rounded curriculum, and health and safety programs. The law authorizes $1.6 billion for grants to states, though it’s up to appropriations committees (Alexander is a member) to make the ultimate decision.
“We need to match our aspirations in the authorization bill with our appropriations,” Alexander said.
The disparity in the legislators’ speeches continued through their closing remarks.
Alexander concluded by noting his excitement about the future, praising the end of the “national school board” that will come through ESSA and detailing his high hopes for the “innovation in each of the states and school districts that comes from this new law.”
Scott ended with a warning, reminding the state leaders that it is now up to them to implement the law in a way that “honors the tenets of educational equity.” He concluded: “I hope to work with all of you and others to bring a national laser-like focus on equity of educational opportunity.”
Both congressional leaders were well received, and their closing arguments met with robust applause. Now the clock is ticking on which of their visions will come to pass: The first deadline for states to submit their final ESSA plans is only two weeks away.
Submit a Letter to the Editor
March 21, 2017