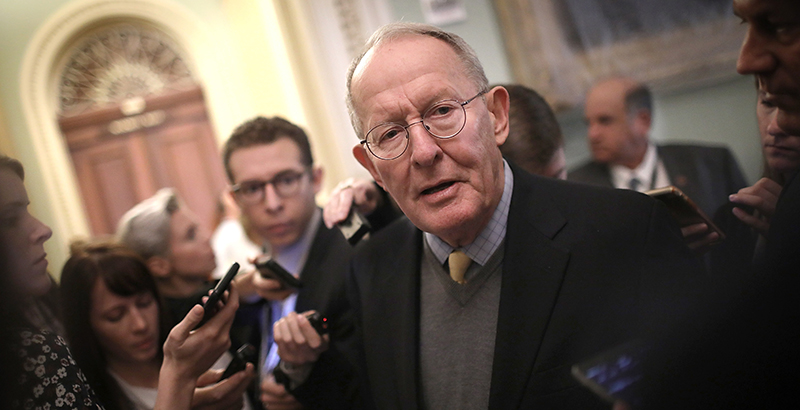 Alexander, speaking at the American Enterprise Institute, also said he is committed to working with Democrats to address hot-button issues surrounding federal Title IX regulations that govern how schools handle allegations of sexual misconduct, though he acknowledged that resolving the issues might prove difficult.

Rewriting the nation’s more than 50-year-old higher education law has long been a priority for Alexander, the current chairman of the Senate Health, Education, Labor and Pensions Committee and a former education secretary, governor, and university president.

His appearances — often, like this one, accompanied by a printed version of the Free Application for Federal Student Aid, which he unfurls like a scroll to emphasize the absurd length of the questionnaire required for grants and loans — amount to a marker of sorts of another attempt at reauthorization, an effort that has been active on and off for about five years.

This year, though, Alexander’s under a ticking clock to finish the rewrite. He’ll retire at the end of his current term in 2020, he said last year, and big policy changes are always harder to accomplish during an election season.

Alexander said he wants his HELP committee to finish a rewrite by the spring and the Senate to consider the bill in the summer. That would give time to work out differences with the House in order to finish a bill by the end of the year. It’s also the general schedule under which he crafted the deal that became the Every Student Succeeds Act.

On Title IX, Alexander praised the Education Department for putting forward a rule that will be considered in the formal notice-and-comment process. The Obama administration’s use of a “Dear Colleague” letter rather than the rulemaking procedure was a common conservative criticism.

“Universities and students deserve to have certainty about what the Title IX rules are, but it’s my belief that Congress can also address a number of these issues, and I am committed to working with Sen. Murray to trying to do just that,” he said of his Democratic counterpart, Sen. Patty Murray of Washington.

Simplifying college aid, but devil’s in the details

On repayment of loans, Alexander would reduce the current number of options from nine to two. He believes most students would choose a plan that would automatically deduct 10 percent of their discretionary income every month until the loan is repaid. Otherwise, they would have automatic deductions of equal amounts to repay the loan over 10 years.

“Students will have a manageable payment, most will completely pay off their loans … and it should end the nightmare that may students have worrying how they’re going to pay off their student loans,” he said.

Finally, Alexander’s school accountability program would judge schools, at the program-specific level, based on whether their students can repay their loans.

The idea, commonly called “gainful employment,” is currently applied to all programs at for-profit colleges and job-training programs at community colleges and other nonprofit schools that don’t lead to a degree. It has gone through several iterations through court challenges and changes in administrations. Alexander would apply the rule, which aims to measure whether students are getting well-paid jobs after graduation, more broadly to link programs from English to pre-med to how well students taking them repay their loans.

How each of those broad proposals is specifically crafted into legislation will matter a great deal, higher ed advocates said during a panel discussion after Alexander’s speech.

How, for instance, would employers know to automatically withhold loan payments, asked Jason Delisle, a resident fellow at AEI.

Lanae Erickson of Third Way, a centrist Democratic group, wondered how Alexander’s proposed income-based repayment plan would interact with his idea to measure schools based on whether graduates are repaying their loans. If, for example, the accountability provision measured only loan defaults, it would seem not to count students in the income-based payment system who aren’t making payments but also aren’t defaulting on their loans, she said.

And colleges are sure to kick up a fuss at the broader application of gainful-employment-style regulations.

Sarah Flanagan, vice president for government relations and policy development at the National Association of Independent Colleges and Universities, said calculating loan repayments by program could lead some schools to charge less for majors that don’t pay well. And, she said, lower-income students could be pushed toward those cheaper, and lower-paying, programs.

“When we look at the outcomes it would have for equity and choice on campus, we’re alarmed about it,” she said.