Trump Mulls Parting Shot on Private Schools, but Experts Dismiss Possible Executive Order as ‘More Bluster for the Base’ 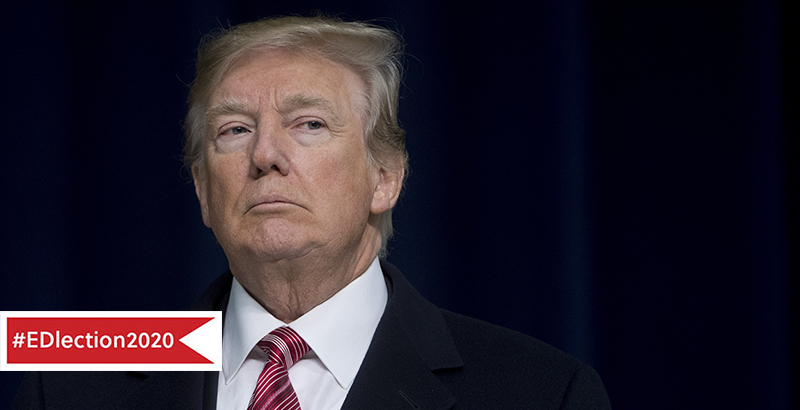 When U.S. Secretary of Education Betsy DeVos withdrew her rule directing pandemic relief funds to private schools and decided not to appeal a federal court ruling against the plan, much of the education community let out a sigh of relief.

But the possibility that President Donald Trump will issue an executive order to accomplish what DeVos could not has them wondering whether the outgoing administration is taking a parting shot before leaving office at what the secretary calls “government schools.”

Most observers cast doubt that Trump could legally allocate funds for school vouchers. Three federal judges, including one he appointed, already ruled that the Coronavirus Aid, Relief, and Economic Security, or CARES, Act left no room for the secretary to steer the funds as she wished.

DeVos Waves White Flag on Private School Aid Fight, Pledging to ‘Respect the Rule of Law’ on Use of Pandemic Funds

“It is not clear what they have up their sleeves,” said Derek Black, a law professor at the University of South Carolina, who served as an expert witness in a similar lawsuit regarding CARES Act spending in his state. “Given the litigation losses they have suffered with their first tricks, I struggle to imagine how their second tricks would be any more legally plausible.”

On Thursday, Politico reported that the president is considering a slew of final executive actions, including providing relief funds to parents whose schools haven’t reopened so they could pay for tuition at private or religious schools.

Attorney Tamerlin Godley, who represented the NAACP in one of the relief fund cases against DeVos, said the executive order would be illegal if Trump uses funds that Congress intended for a specific purpose.

“Only Congress can appropriate funds,” she said.

Sasha Pudleski, advocacy director at AASA, The School Superintendents Association, called the plan “more bluster for the base” in a tweet. “There’s also nothing he can do that would be meaningful here. He can’t create a voucher program vis-a-vis [executive order]. He can’t force states into vouchers either.”

And even school choice proponents don’t think he should try.

If there were some mechanism for changing how CARES Act funds can be used, “it would be a terrible way to make policy,” said Neal McCluskey, the director of the libertarian Cato Institute’s Center for Educational Freedom. “Legislatures, which represent the people, should decide how money will be spent through law, not presidents through executive orders.”

The possibility that Trump would continue to use his executive powers up until he leaves office isn’t necessarily a surprise, but it does have some policy experts wondering what source of funds the president would tap if he could.

“I am guessing he’d focus on unused funds from CARES, but most of that education funding was already allocated to the state level” and has flowed to districts, said Noelle Ellerson Ng, AASA’s associate executive director for advocacy and governance. “Would he take money from other parts of CARES to put to vouchers? I anticipate states would have concerns with that.”

States have until spring — a year after the relief package was enacted — to return to the federal government any of the relief funds they haven’t allocated to school districts. There are longer timelines for administrative funds. But even if they return it, “I don’t think the Act just lets the president spend remaining funds however he sees fit,” McCluskey said.

The CARES Act also included more than $300 million for DeVos to distribute through grants, but she’s already allotted these funds. Another $100 million was allocated toward a fund for helping schools and colleges recover from a “traumatic event.”

As Ng said, there’s the question of whether the president would turn to relief funds not initially intended for education to accomplish his goal. For example, the White House has been urging Congress for authorization to spend unused funds for the Paycheck Protection Program.

Pudelski said that any executive order the president issues would immediately be undone by the Biden administration. But depending on how quickly Trump acts, there is a small possibility, Black said, that he could follow through on a promise he and DeVos have been pushing since the beginning of the pandemic.

“They won’t be around long enough to deal with the legal fallout and the money could very well be gone by the time anyone catches up,” Black said, “so that is a realistic problem.”