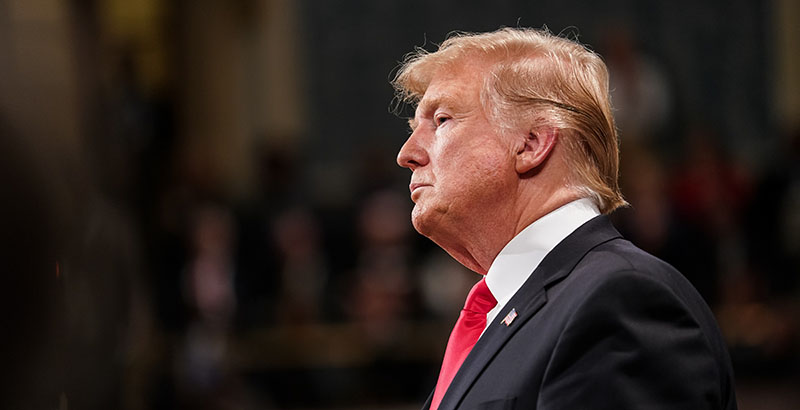 President Trump looks on while delivering the State of the Union address. (Doug Mills-Pool/Getty Images)

The Trump administration announced a proposal Monday to cut billions of dollars in education aid, in part by merging dozens of federal education initiatives, from charter school expansions to educating homeless children, into a single grant program.

The move, which is practically assured not to win House approval, is part of the fiscal 2021 budget proposal the White House released Monday. The proposal aims to cut 7.8 percent in spending on federal Education Department programs, from $72. 8 billion to $66.6 billion.

Under the plan, 29 formula and competitive grant programs — the largest being Title I — would be merged into a single block grant to states. The merger “would empower States and districts to decide how to best use Federal funds to meet the needs of their students,” according to the White House. In total, the “Elementary and Secondary Education for the Disadvantaged Block Grant” would receive nearly $19.4 billion in 2021.

To allocate funds under the proposed grant program, the Education Department said it would use the same formula it currently uses to distribute Title I grants.

“Instead of Washington politicians and bureaucrats forcing local schools to spend limited resources on D.C.’s priorities, this budget proposes putting state and local leaders, teachers, parents and students themselves in control of education,” Education Secretary Betsy DeVos said in a media release. “We know states will spend their money differently, and that’s okay. In fact, that’s what we hope they do. They know best how to serve their students.”

The proposal announced Monday falls in line with Trump administration efforts to reduce the federal footprint in America’s schools. The proposal slashes a total $4.7 billion from the federal programs the block grant seeks to replace, but it is less severe than what the administration offered last year, when Trump proposed 10 percent in education funding cuts. Over time, the changes would reduce the Education Department’s staffing and administrative costs, according to a fact sheet by the Office of Management and Budget.

In total, Trump’s $4.8 trillion budget proposal calls for cuts to programs like Medicaid and the Children’s Health Insurance Program while increasing spending on the military, infrastructure and a wall along the U.S.-Mexico border.

Meanwhile, Trump’s proposed budget seeks to spend billions in federal money — roughly equivalent to the totality of proposed cuts under the block grant — to help subsidize private school tuition. During his State of the Union address last week, he touted school choice as a pathway for students stuck in “failing government schools” and promoted a plan to create “Education Freedom Scholarships.” The proposal, a key legislative goal for DeVos, would offer federal tax-credit incentives to individuals and organizations that donate to state tax-credit scholarship programs for a host of educational offerings, including private school. Under the budget, the scholarship program would receive $1 billion in 2021 and $5 billion in subsequent years.

Nina Rees, president and CEO of the National Alliance for Public Charter Schools, called the proposed budget “chilling,” arguing that it would result in fewer options for families. Last year, the federal government invested $440 million in charter schools. Merging that funding into a single block grant, Rees said in a statement, could hinder local efforts to create new charter schools because “it would put too much power in the hands of anti-charter politicians at the state level.” The federal charter school program helps fund new campuses in 45 states that allow them. The administration’s federal tax-credit plan to encourage donations for private school choice, however, “has little chance of passing” into law, Rees said.

“As a result, there’s no guarantee that this tax-credit plan would ever help a student in need of access a better school,” she said.

Beyond charter schools, federal initiatives touted for consolidation are far-reaching, with the the biggest line item being Title I grants, currently funded at $16.3 billion. Other programs folded into the proposed consolidated grant would be initiatives on school safety, rural education, teacher development and homeless education. New federal data, released in January, found that the number of students experiencing homelessness has surged in recent years.

Randi Weingarten, president of the American Federation of Teachers, accused the Trump administration of scheming to “funnel taxpayer money out of public schools and into private schools.” The proposal to merge federal education programs into a single block grant, she said, “is simply code for less funding to the schools and communities that need it most.”

While critics focused on the proposed consolidation, the budget request also aims to provide a $900 million funding boost for career and technical education, which also got a call-out in Trump’s address to Congress last week, and a $100 million increase for state grants under the Individuals with Disabilities Education Act.

Among those who lauded the proposed budget is Elsie Arntzen, Montana’s superintendent of public instruction. The proposal, Arntzen said in an Education Department press release, is a victory for “local control.”