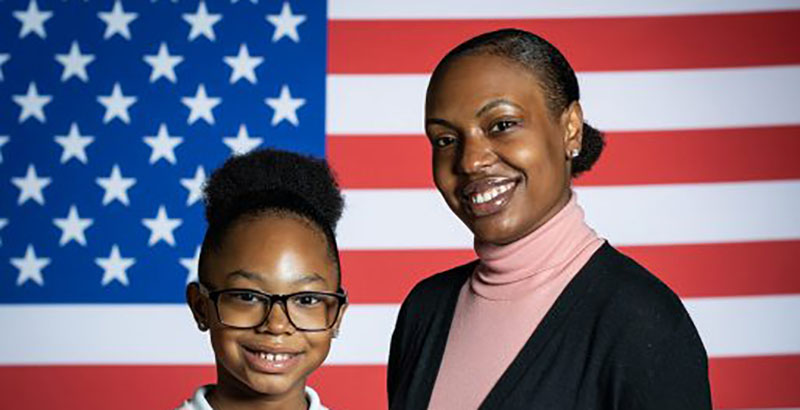 Janiyah Davis, a 4th grade student from Philadelphia, Pennsylvania, and her mother, Stephanie. Both attended President Trump's State of the Union speech Tuesday night, where he spoke of the family's unsuccessful attempt to get a tax credit scholarship in Pennsylvania. (White House)

During his State of the Union message Tuesday night, President Donald Trump addressed a Philadelphia fourth-grader in the audience stuck in “failing government schools” and told her she would get a life-changing opportunity to attend the school of her choice.

By Wednesday, however, it became clear that there was more than meets the eye to the former Apprentice star’s prime-time gambit: Though it was described by the president as an “opportunity scholarship,” the U.S. Department of Education acknowledged that Secretary Betsy DeVos would personally bankroll the child’s schooling out of her own salary.

During the Washington address, Trump said that Janiyah Davis would be awarded the scholarship to cover private school tuition, and he blamed Pennsylvania Gov. Tom Wolf for trapping the child and thousands of others on a waiting list. 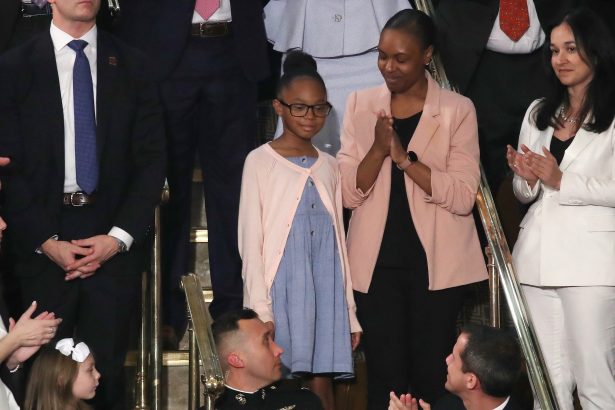 “Your long wait is over,” Trump said to Janiyah, who attended the address with her mother, Stephanie. “I can proudly announce tonight that an opportunity scholarship has become available, it’s going to you, and you will soon be headed to the school of your choice.”

Last June, Wolf vetoed legislation to nearly double the state scholarship program, which gives tax credits to businesses that donate money to help students pay for private school tuition. Although school choice options in Pennsylvania played a central role in Trump’s speech, the remarks were part of an effort to build support for a controversial federal school choice proposal championed by DeVos and Republican Sen. Ted Cruz. The federal Education Freedom Scholarships and Opportunity Act — which would provide federal tax credits to people who donate to state scholarship programs — is unlikely to pass and has faced opposition from advocates across the political spectrum.

But the source of the scholarship Trump announced Davis will receive — and how it’ll be used — was a mystery, with a search for answers leading down a rabbit hole of bureaucracy. In a phone call Wednesday morning, a spokeswoman with the Pennsylvania Department of Education said that they, too, were looking for answers.

In an email to The 74, an Education Department spokeswoman directed questions to the White House, noting that Trump invited the Davis family. A White House spokesman directed questions to the Education Department. Later, however, Education Department spokeswoman Liz Hill said that in “her personal capacity,” DeVos donates her federal salary every year. “In this instance, she will be directly providing the scholarship for Janiyah,” Hill said. Hill didn’t provide additional information, such as how Davis was selected for the opportunity, where she plans to attend school or how much money she would receive.

Stephanie, the student’s mother, offered a different narrative in an interview with reporters from the Philadelphia Inquirer. Janiyah attends Math, Science and Technology Community Charter School III, one of Philadelphia’s most sought-after public charter schools. Janiyah previously attended Only Christian School, where she received a scholarship but the private school tuition remained steep. She enrolled in the charter school after receiving a coveted seat last summer.

Though she said she was honored to be recognized in Trump’s speech, she was surprised her daughter got the scholarship. Now, Stephanie is weighing whether to keep Janiyah in the charter school or to send her elsewhere. Stephanie doesn’t view the charter “as a school you want to get out of at all,” she told the Inquirer. “I view it as a great opportunity.”

Both Trump and DeVos have donated their government salaries to education initiatives in the past. Last year, DeVos donated a portion of her government salary to a group of historically black colleges and universities. 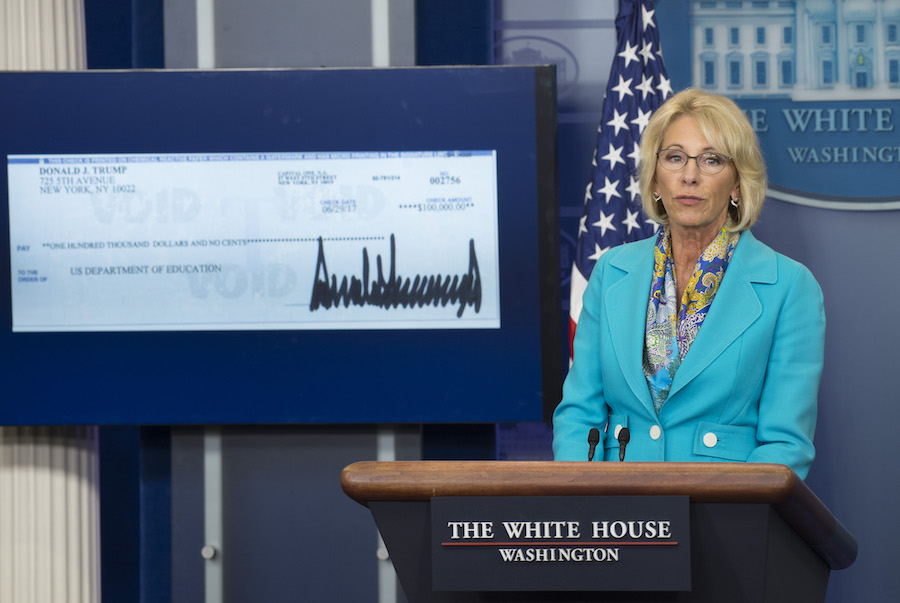 Betsy DeVos speaks about a donation from President Trump to the Department of Education during the daily press briefing on July 26, 2017. (Getty Images)

DeVos’s action, first revealed in a tweet from the New York Times’ Erica Green, generated a host of harsh reactions on social media. “We the people are supposed to be thankful when the oligarchs bestow gifts to lucky ones among us,” one Twitter user commented. Another user responded: “Rather than consistent public policy, the wealthy get to decide who among us is the ‘deserving poor.’”

Casey Smith, communications director at the Pennsylvania Department of Community and Economic Development, said in an email that the state wasn’t given any information beforehand about Trump’s announcement and called several claims in the president’s speech misleading. The Pennsylvania Department of Education designates eligible schools under the program, while the Community and Economic Development department approves eligible businesses.

After Gov. Wolf vetoed a bill to expand Pennsylvania’s education tax-credit program, he signed off on a budget that included a more modest, $25 million increase for the program, “which the White House did not mention,” Smith said. Though Trump said “tens of thousands of students remain on a waiting list” because Pennsylvania’s school choice efforts are so popular, the state “does not collect data related to how many students are on the waiting list” for the tax-credit program, which Wolf believes lacks adequate accountability, Smith said.

“Little is known about the educational outcomes of students participating in the program due to a reporting loophole in the current law,” Smith said. “Even less is known about the scholarship organizations that retain up to 20 percent of each dollar that is supposed to pass through them and are subsidized heavily by taxpayers.”

Despite the uncertainty, the news generated a slew of differing opinions from education pundits and policymakers.

Ironically, some of the harshest critics of the proposal come from the political right; they view it as federal overreach. Among them is Neal McCluskey, director of the Center for Educational Freedom at the libertarian Cato Institute, who said he worries that greater federal involvement in school choice could become “one-stop shopping to regulate private schools.”

Though there’s nothing wrong with DeVos donating her salary to the student, McCluskey said, it’s unclear whether she’s giving money to the Davis family directly or going through the state’s tax-credit program. The way Trump presented the news, he said, could confuse people who don’t fully understand how education tax-credit scholarships work.

“The way it was presented at the State of the Union was, at the very least, unclear,” McCluskey said. “The politics of how it was presented — making it sound like an opportunity scholarship — that’s got potentially problematic aspects to it depending on how much credit you think the president should get for this student getting a scholarship.”

But from a political perspective, focusing on the plight of a single student was smart messaging, said Jeanne Allen, founder and CEO of the Center for Education Reform. She noted that “when you want someone to make a point, it’s not difficult to find someone who’s got a compelling story.” As for DeVos, Allen said the donation shows that the education secretary has “got a big heart.”

“People think she’s insane for doing this job because she’s been put through such hell,” Allen said. But “this is her issue; this is what she lives for.”

Max Eden, a senior fellow at the conservative Manhattan Institute, said it was inaccurate to characterize the DeVos donation as an “opportunity scholarship” but didn’t believe that Trump’s statements were “substantively misleading.” Although it’s highly unlikely that the federal tax-credit proposal will advance in Congress, he said the speech could bolster Trump’s electoral prospects.

“It’s not a coincidence that Janiyah comes from a battleground state that many consider to be a ‘must-win’ for the president,” Eden said in an email. “And I imagine that the sight of Congressional Democrats refusing to stand for Janiyah will help him in that regard.”

Michael Petrilli, president of the Thomas B. Fordham Institute, a right-leaning education think tank, viewed the situation differently. Though he applauded DeVos’s donation, he predicted that the Trump speech will have little effect on the school choice debate in Pennsylvania or nationally.

“What school choice needs right [now] is greater bipartisanship,” Petrilli said in an email. “That’s not going to be aided by our most polarizing president in American history.”