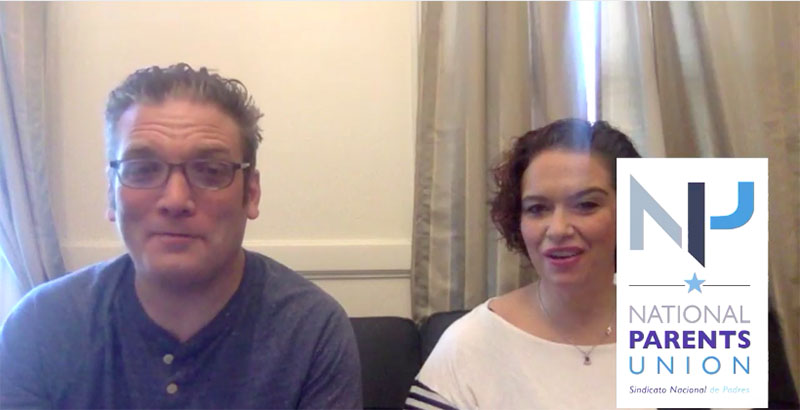 Tim Langan and Keri Rodrigues of the National Parent Union announced the results of their group’s first national poll Friday, May 8. (Facebook)

With more than 50 million students out of school because of the coronavirus pandemic, a new poll finds that 67 percent of parents support continued closures until officials are certain that reopening will not pose a health risk.

The findings come as President Trump continues to encourage states to consider reopening and as nearly half of parents, 45 percent, acknowledge that their children are learning less than they normally would when attending school.

That makes sense, said Keri Rodrigues, a co-founder and the founding president of the National Parents Union, the educational advocacy network that commissioned the poll.

“Families want to put health and safety first, and until [officials] are really thinking through what [reopening] means and how that’s possible, and frankly, until you invite parents to the table so that we can help be a part of that process, we’re not ready to send our kids back,” she said.

Echelon Insights conducted the online survey of 500 parents between May 4 and May 5. The poll had a margin of error of plus or minus 4 percent.

The National Parents Union launched in January with affiliates in every state, plus Washington, D.C., and Puerto Rico. The group is intentionally inclusive — explicitly welcoming, for instance, grandparents and formerly incarcerated parents — and aims to broaden parent involvement and help parents reach policymakers.

Throughout the pandemic, the group has hosted four daily live videos, in English and Spanish, on its Facebook page. Some videos have received as many as 35,000 views in just over a week.

Rodrigues, who once hosted a radio talk show, now goes live each weekday from her Massachusetts home, where she’s been under lockdown with her partner and five boys between the ages of 7 and 12. She said the poll findings reflect the concerns she’s heard during her broadcasts: With a vaccine likely at least a year from being available, parents are willing to keep their children home indefinitely if schools cannot safeguard students.

“Absolutely,” said Rodrigues, speaking the same day she said she lost a family member to COVID-19. “Frankly, a lot of the skepticism comes from the fact that I don’t have a lot of trust in these systems because they were underserving my kids, who are Latino, in pre-COVID times. You can bet I’m going to be very skeptical when they tell me not to worry about this.”

Just 22 percent of parents surveyed agreed that “schools should reopen as soon as possible so students don’t fall too far behind and can receive the educational support they need.” When parents were asked specifically about economically disadvantaged students who “may be more at risk of falling behind academically and need additional support,” only 30 percent favored the idea of sending those students back before other students.

Since late April, President Trump has twice called for schools to open as soon as possible, even “if it’s for a very short period of time” and even if it means teachers age 60 and over, who are more at risk, do not yet return. On April 27, Trump told a group of governors, “Some of you might start thinking about school openings because a lot of people are wanting to have the school openings.”

When students do return to school, most parents do not want to go back to the status quo. By a nearly two-to-one margin, parents said schools should be focused on rethinking how they educate students. Even more parents — 85 percent — expressed support for sending out alerts to all parents if any student or educator becomes ill. The poll was conducted before a 5-year-old boy died Thursday in New York City from COVID-related complications. As more children fall ill — five children in New York state have now died and 93 are sickened — parents’ views on reopening schools could change.

‘An Unknown They’ve Never Experienced Before’: As Coronavirus Death Toll Grows Among NYC Teachers and Staff, Union Support Team Ramps Up Its Efforts

Of five options that could help students once schools do reopen, parents were least supportive of extending the school day, with 53 percent in support and 38 percent in opposition.

Looking ahead, Rodrigues said she hopes policymakers engage with parents and realize just how much is riding on the decision about when — and how — to reopen schools.

“If our schools are not open and our children cannot go to school, people cannot go to work,” she said. “This has got to be a collaborative thought process.”

Disclosure: The Walton Family Foundation, The City Fund, and the Bill and Melinda Gates Foundation provide financial support to the National Parents Union and The 74.