‘An Unknown They’ve Never Experienced Before’: As Coronavirus Death Toll Grows Among NYC Teachers and Staff, Union Support Team Ramps Up Its Efforts 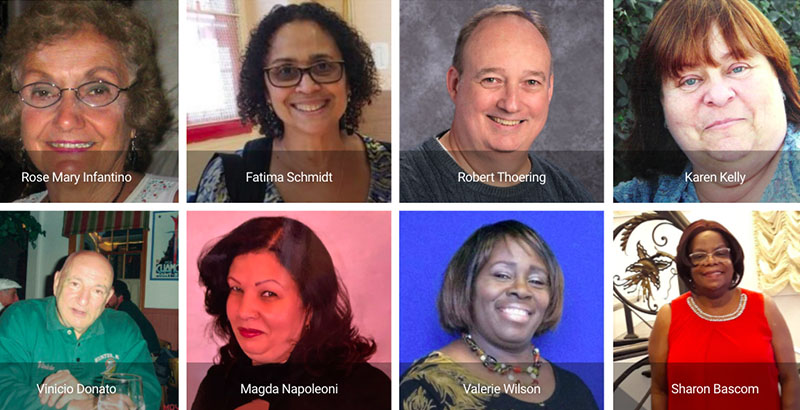 The United Federation of Teachers in NYC commemorates members who've died from coronavirus on its UFT Honors page. (ufthonors.uft.org)

As New York City school teachers and staff confront the ongoing challenges of remote learning while mourning the deaths of more than 60 of their colleagues to coronavirus — far more than any other district in the nation — a small teachers union support group has quickly scaled up to meet their needs.

Before the pandemic, the United Federation of Teachers’ Member Assistance Program, made up of six full-time staff offering short-term counseling and mental health resources, fielded some 30 calls and 20 emails a day. Now, there are five times that many emails flooding their inbox daily, and the team — with the help of other UFT specialists and nearly 100 volunteers — is running virtual support groups three times a day, five days a week for educators and other staff.

UFT members were already leaning on the assistance program more than normal in the weeks since the school shutdown began, union officials said. They’ve sought a listening ear as they’ve adjusted to being away from their students, or doubted whether they were doing enough to keep education going in the country’s largest school system, which serves some 1.1 million students with a wide array of needs and family income levels.

Now, the shocking loss of so many of their co-workers to COVID-19 has heightened members’ uncertainty.

“What does [school] look like when we go back in September without our principal or without that eighth-grade teacher?” said Tina Puccio, director of the program, known as MAP, which is working now to set up additional virtual support sessions specifically for the school communities where staffers have died of coronavirus.

“There’s a lot of fear now of a different type of unknown,” Puccio said, “an unknown that they’ve never experienced before.”

Sixty-three Department of Education employees died from coronavirus between March 16, when the district shuttered, and April 17, DOE officials announced Monday — a grim, marked increase from the initial count of 50 people the week before. Twenty-five of them were teachers. The data are based on family members’ reporting; the city’s Health Department has not confirmed that the deaths are related to the coronavirus.

“Each of these individuals had an impact on one of our schools or offices, and we are supporting these communities during this unimaginably difficult time,” the DOE wrote in a statement.

Part of an email from the Department of Education sent to reporters on Monday.

The deaths of school employees in New York City is the largest of any of its local affiliates, as confirmed by the American Federation of Teachers, the 1.7 million-member national union. Seventy active AFT members have died as of Monday; at least 40 of them were working for NYC schools. An AFT spokesman noted, though, that New York City is “our largest affiliate to begin with” and “has had the most infections of any metro area,” with more than 134,000 cases reported as of Sunday.

L.A. Unified, the nation’s second-largest school system, which stretches across more than 700 square miles, hadn’t recorded any employee deaths from coronavirus as of late last week, a district spokeswoman confirmed. The Chicago Teachers Union, which represents educators and other school staff in the third-largest district, said Monday it wasn’t aware of any deaths among its members, either. In Detroit, a city that has been particularly hard hit by the virus and whose public schools serve about one-twentieth as many students as New York City, two AFT members and two other employees have died as of Monday, according to the AFT.

In a statement to The 74, UFT President Michael Mulgrew said the “sacrifice” of members lost to coronavirus “underscores our determination to see that schools do not reopen until the school system has in place the equipment, the personnel and the strongest possible procedures to ensure parents and staff that the buildings will be safe.”

NYC schools are now remote for the rest of the academic year, with Mayor Bill de Blasio saying that the city is preparing to reopen the system in September. (Gov. Andrew Cuomo has closed schools statewide only through May 15, and he maintains he has final say.)

As for when to reopen, Mulgrew told The 74, “Medical experts have to be the ones to interpret the data, the facts on the ground, not us, not the mayor.”

The union fought last month for closing schools, even as de Blasio insisted on keeping them open, arguing that they provided vital social services for low-income students and allowed families to continue working. The Special Commissioner for Investigations for city schools is now probing a March 10 internal DOE memo that directed school officials not to report cases of staff who had tested positive for COVID-19 to city health officials, The CITY reported last week.

Isolating not the answer

Everyone in the union “is going well beyond the scope of their normal departmental duties” to get their colleagues through this crisis, a UFT spokesman wrote in an email Friday. The UFT serves about 75,000 teachers, with its ranks swelling to nearly 200,000 when retirees and other members, such as counselors and nurses, are included.

To meet members’ needs, eight clinicians from other UFT departments have joined the rotation of virtual support groups. Nearly 100 school social workers and psychologists, all UFT members, are also volunteering their time outside of their daily work with students.

Puccio is adamant that any UFT member who may be struggling right now but is hesitant to seek help should reach out to MAP.

“Figuring it out on your own is not the answer. Isolating is not the answer,” she said. “That’s why the union is providing services like this to people … so that people can see that they’re not it in by themselves.”

MAP in the past month has rolled out a range of free virtual supports for union members. Some of it lives on a “Self-care during the coronavirus crisis” page, with a list of meditation apps and book recommendations — even a MAP-created podcast.

Through the end of the academic year, MAP is also running its virtual support groups in Zoom rooms — ones that are compliant with patient confidentiality regulations, Puccio added. Virtual support groups typically have a predetermined topic for discussion; past sessions have focused on how to manage fears and anxieties, how to stay connected through social distancing and how to balance work and home life. Sessions are offered three times a day, Monday through Friday, at different times. Recently, roughly four to eight members have been signing on each time, according to MAP.

Any UFT member interested in joining these support groups can email mapinfo@uft.org.

The platform is expanding, too. In the past week, the MAP team launched a separate support group for school nurses, which is now running twice a day every day, including on the weekends. Nurses are “feeling scared, tired and frustrated,” the UFT spokesman said. “Worried about themselves, their colleagues and their families.”

Puccio knows these virtual services are “different” than being able to grieve in person. Members used to “be able to just talk to each other and hug, and just be able to maybe go out after school and have dinner together to process their grief, or go to a funeral, or go to a shiva,” she said. “That doesn’t exist now. … Processing their grief and their sadness is so layered.”

Still, she’s inspired by members’ eagerness to band together, and by their resilience. It’s not uncommon for support group participants to swap contact information so they can stay in touch, she said. Some share how they’re maintaining structure in their lives, from nutrition to at-home exercise routines. (Many teachers also congregate on these local and national Facebook groups.)

“They really have always come out [on] top, even when they’ve personally been affected by COVID,” she said. “The kids are really their top priority, and wanting to just be the best they can for them without being physically together.”

UFT President Mulgrew chimed in on this point. “There are hundreds of thousands of amazing stories” of how educators are coming through for their students despite hardship, he wrote in a statement. “An [English as a second language] teacher from Brooklyn who tracked down a missing student in Colorado and still works with him because schools there are closed and he wasn’t registered. A Queens high school teacher who regularly heads to the Post Office to mail work and materials to students who haven’t or can’t log on.

To commemorate members lost to coronavirus, the union has created a “UFT Honors” page where you can view pictures and read or share memories of those who died. The AFT has also created an “In Memoriam” page that it is working to update.

13 District Schools in D.C. Are Opening as ‘Student Support Centers’ to Serve Needy Students — but Questions About Selection, Safety Remain. A Look at One School’s Plan