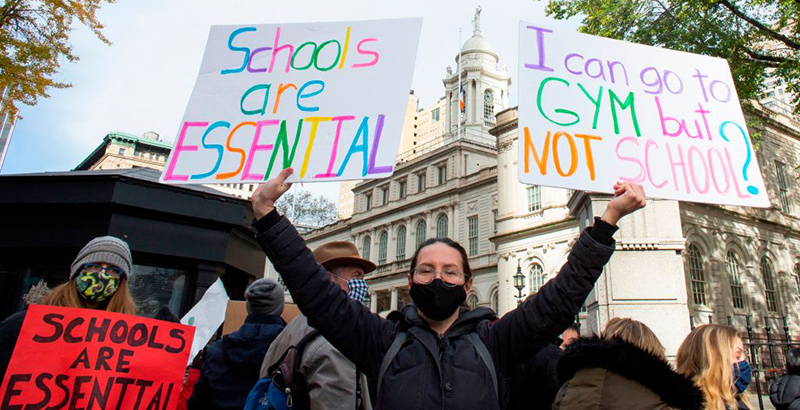 This is continuing coverage of the Nov. 18 announcement that New York City schools — America’s largest district — would suspend all in-person learning due to a surge in coronavirus cases. See Zoë Kirsch’s complete news report on the announcement, the initial backlash among parents and what will (and won’t) be different this time around, versus the system’s shutdown in the spring. (Get the latest NYC and pandemic update delivered to your inbox by signing up for The 74 Newsletter)

Wednesday proved to be an insane roller coaster of a day for New York City families.

After having warned parents last Friday, Nov. 13, that public schools might close as early as the following Monday, Mayor Bill de Blasio scheduled a press conference yesterday at 10 a.m. to discuss the latest numbers on coronavirus infections. When he had yet to make an appearance three hours later, Gov. Andrew Cuomo announced that he’d be having a press conference himself at 1:30 p.m. There, he proceeded to say that New York City had not yet met the 3 percent Covid positivity trigger to close the school system.

Parents across the state let out a sigh of release.

But then a few minutes later, School Chancellor Richard Carranza sent out an email to New York City’s principals informing them that all public schools would be closed as of Thursday.

The reason? The city had surpassed the 3 percent Covid trigger to close the school system.

Shortly after 2 p.m. that letter leaked to a very confused press corps. While NY1 TV reporters were informing city residents that schools were now in the process of shuttering, a reporter at the Cuomo press conference ventured to the governor that parents were confused by the mixed messages.

“They’re not confused,” the governor shot back. “You’re confused.”

As someone who has labored for over a decade to demystify, explain, and simplify the Draconian NYC school system for overwhelmed parents, I can assure you: Today the city’s parents are very, very confused — and very, very angry.

Amid the Wednesday afternoon meltdown, I put out a call to my blog readers and newsletter subscribers: How are you feeling about all this?

Here’s a small sampling of the 50+ replies I received overnight; deeply emotional notes from parents who are frustrated, exasperated and fearful for what this disruption may mean for their children. (We have agreed to protect their identities and only use first names due to their fears of retaliation by their schools.)

Anu: “This is outrageous! These decisions are made with zero regard for children and parents! To inform working parents in the afternoon that NYC schools are closing!!!”

Frank: “It is highly disheartening, and I feel our public school system will receive the blunt of these inconsistent policies for years. For younger students, pre-K centers remain open in community organizations like the YMCA, but in a DOE building, it is closed. Many parents are moving their children (who can) to private, full-time schools and may never come back to the public school system, creating an ever-widening chasm that may take years to repair, if ever. All told, this will lead to even larger inequities in our public school system.”

Miriam: “I watched the Cuomo presser. He said we are “at 2.5%” at least a dozen times. So what gives with de Blasio? United Federation of Teachers pressure all week?? Livid!”

Cathy: “Pros: I want the teachers to stay safe and feel safe. I think part of this is because we do not have enough teachers to handle the number of in-person kids especially over the holidays in case teachers need to quarantine before/after seeing family. Cons: My kids have had learning losses. One has an IEP that cannot be served since none of the IEP teachers are in-person and she can’t do online learning. I do not know when schools will reopen. I am bleeding cash.”

Natalia: “Liquor stores were considered essential, while schools are first to close! Way to go as a nation.”

Sarah: “We are disadvantaging students who do not have devices, connectivity, and adults at home who can help them navigate the various apps and learning platforms (which, as we know, are not that easy to organize and navigate!). Something like 25% (more?) of students do not log in from home on their remote days. Now they will slip further and further behind. This is a political game to appease unions, at the expense of our children’s learning. We should be trying to get them into schools more days rather than taking them out altogether. “

Kate: “De Blasio and Carranza have not shown any level of competence throughout this whole year. Latest evidence: The plan was to close schools at 3% and they were giving daily updates on the issue. Yet they won’t distribute devices to some kids for six weeks? No planning. No coordination. No plan to get food to kids who need it!”

Fred: “Kids going from home to school to home clearly aren’t the COVID problem. Now parents will have to allow caretakers, nannies, etc into their homes. That will likely spread the virus.”

Daya: “It is another insult to parents that the announcement was delayed for hours after the closure was obvious. I feel the mayor has no respect for parents because of how poorly he communicates. Closing public schools while private schools (including city-funded UPK in private preschools) remain open is an advertisement for the school choice movement. Vouchers or homeschool/pod grants would be more useful for young children than remote learning.”

Kelly: “I’m in my savings already paying someone to watch my kids and manage remote learning while I work (my kids are 4 and 6). Why are we paying taxes?”

Elena: “Disgusting. Spit in the face over and over. This is a definite way to drive away all families that are still left in the city. This is the greatest city in the world! And I no longer want to live here because of this administration and how much they have poisoned things over the years and now with COVID they are really showing their true colors. I’m concerned what will be left of the school system and the city when COVID is no longer a threat.”

Vicky: “If NYC DOE had announced that schools were going to be fully remote, I think a lot of parents/guardians could have prepared and jobs wouldn’t be so (averse) to the idea of having their employees work remotely as well. But because NYC DOE thinks they can fight COVID-19 with the already-limited resources they have, a lot of parents are left to find means for child care last minute and jobs are less open to allowing employees to work from home. I am fortunate enough to be able to work remotely, and I thank God for it but I really do feel for my fellow parents and school community.”

Eileen: “The 3% COVID threshold is arbitrary; it’s not CDC guidance, or even NYC Health Department guidance. It doesn’t reflect what’s actually happening inside the schools. Also, de Blasio decided the 3% was non-negotiable but has no equally clear standard for reopening schools. So all of us parents who put faith in our teachers and principals and sent out kids back to school despite all the upheaval the DOE threw at us in August and September feel pretty ill-used by de Blasio. Also, there is a feeling that he is making these decisions without any input from the many experts he has available to him at the DOE. They could have told him the announcement has to come before 1:30 p.m. Because if you make it at 2 p.m., which he did, many teachers are already on their way home. So they all have materials still in the classroom that they need at home. And the principal is going to have to chase them all down to discuss his/her plan. So it’s a nonsensical decision that was executed badly on a very basic level.”

Faiza: “As an immigrant woman of color and someone who has worked hard to make NYC my home for almost 15 years, it saddens me to think I may have to leave the city I love and have invested so many years of my life in in order for my kids to get the education they need.”

M.R.: “Public schools are simply not a transmission vehicle for the virus. In fact, one could argue that keeping children outside schools might be even more dangerous than keeping them in schools. I expect New York City to represent excellence, intelligence and courage for our youngest citizens. Unfortunately, our elected or appointed officials are demonstrating once again that we, as a city, thrive not because of them, but despite them.”

Maggie: “The teachers union should be ashamed of themselves. It is absolutely nonsensical that they can’t do this by individual schools and shut them down if a certain percentage of people test positive.”

Stephanie: “The DOE has done a terrible job with remote learning and the thought of endless months of it is hideous on a level that’s beyond words. The days my hybrid-son is home are a complete waste. Today the class told each other knock-knock jokes for 20 minutes. My lease is up in 2021, and I plan to move out of the city to ensure my child has the best education possible moving forward!”

Celia: “We are all going to be stuck together in our small apartments again 24/7. Public school kids are losing out. Private schools are monitoring and managing well it seems, taking precautions, and their children are benefiting from some normalcy. As are the parents. A remote office parent and two remote kids can’t function in an apartment. From my son’s preschool class, I only know of three families that stayed in the city. The mayor and chancellor’s management of the city has everyone bailing, and leaving, starting with parents. I argued for years with my husband about staying in the city instead of the Westchester burbs. I won. And now I am the one who is about to flip the city the bird and never return.”

Carl: “I think the closings should be by district. And for large districts, like 2, which span giant swaths of the city, they should do it by zip code, meaning if you live in a safe zip code and go to a school located in a safe zip code, you may attend school in person.”

Rocky: “My emotions are very mixed. I am boiling-mad at de Blasio, Carranza, Cuomo, UFT President Michael Mulgrew for being so cruel to these students and parents. Another part of me is breathing an enormous sigh of relief. I reached my fed-up point a week ago and enrolled my child in Catholic school, so we are free from the DOE.”

The Path to Universal COVID-19 Testing in Schools

Ahead of Broader Reopening, Asks for Clear Transportation Plans