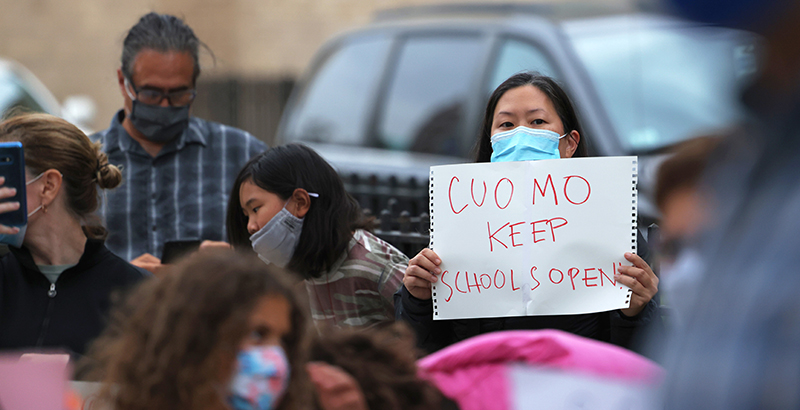 The week of Oct. 5 to 9, 2020, proved a roller-coaster nightmare for New York City parents, as Mayor Bill de Blasio announced that, due to rising COVID-19 positive cases, he would be closing all schools — public, charter and private — along with other “nonessential businesses” in select zip codes on Wednesday the 7th.

Not so fast! Gov. Andrew Cuomo interjected. Closing schools isn’t your call, it’s my call! And I say — close the schools on Tuesday! (to paraphrase)

Then, on Wednesday, New York State announced that even more schools would be closed on Thursday. Which schools?

Well, that depends on whom you ask.

The governor released one set of maps.

The mayor’s office released another.

If seasoned education reporters were ripping their hair out …

UFT also says if your school was closed based on its zip code it will stay closed https://t.co/JjP9IjZ1X2

I DON’T KNOW HOW YOU COULD POSSIBLY BE CONFUSED

… you can imagine how parents felt. Less than 24 hours before the first bell, many still didn’t know whether their school would be open come Thursday morning. (Some received calls during the day, others not until after 8 p.m. on Wednesday.)

Matters got even more confusing when it became obvious that children who lived in areas with higher infection rates could still travel to schools outside those neighborhoods if that’s where they were enrolled, as could those — including teachers — who worked in other areas. With nonessential businesses closing in the hot zones, didn’t that mean that people would be going farther afield to fulfil their needs? Where was the containment, exactly, in this scenario?

Tomorrow and throughout the week, we will continue testing in additional schools.

Some criticized that the sample set was so small as to be meaningless in a school district with over 1 million students. The DOE promised that 300 more schools, this time on the periphery of Brooklyn and Queens’ hot zones, would be assessed next. Meanwhile, parents of children in schools with no positive cases were furious that they were being forced to remain closed.

The New York State Catholic Conference released a statement on behalf of the Archdiocese of New York and the Diocese of Brooklyn, asking, “Should our schools be ordered closed by the state absent any significant COVID-19 outbreaks because of inferior protocols at non-Catholic schools?”

Public school parents from schools where not a single positive case had been reported rallied in Brooklyn, saying, “We, as parents, came to school under the agreement that the school would shut down on a case-by-case basis. If there are positive cases, then the school should shut down. … This community is very separate from what’s going on. The people in this community are following all the rules, the school is being incredibly careful.”

The “this community is very separate from what’s going on” comment, as well as the emphasis that “people in this community are following all the rules” likely refers to other areas of Brooklyn. Many of the “red zones” where COVID cases have been spiking include Orthodox Jewish neighborhoods where, as The New York Times reported:

The governor has used photos of packed crowds of Orthodox Jews this week to make the case for imposing restrictions in certain areas. On Wednesday, Mr. Cuomo defended the new rules, noting that the virus test positivity rate in the state’s hot spots was about 5 percent, compared to 1 percent in the rest of the state. “To the extent there are communities that are upset, that’s because they haven’t been following the original rules,” he said. “That’s why the infection spread, because they weren’t following the rules and the rules weren’t being enforced.”

The perception outside those areas seems to be: Why not go directly to those schools that you believe are violating the health code, write up a report on their infractions and shut them down? Why institute collective penalties on everyone in the vicinity?

When the Department of Health drops in on restaurants (hey, who remembers restaurants?) and deems them in violation of multiple hygiene codes, it posts a big, ugly F in the window and closes the place down (yes, even in a pandemic). It doesn’t close down other restaurants on the block.

Neither should school closings.

Instead of drawing arbitrary lines (in some neighborhoods, they literally run down the middle of blocks) and announcing that everyone on one side will be treated one way while everybody on the other will be treated another, am I really proposing something so radical when I suggest that the Department of Health assess every school individually?

Don’t make an appointment, just drop in unannounced. Look around. Are students’ desks 6 feet apart? Is everyone wearing a mask? Are there adequate cleaning supplies? Is there ventilation? Is food being handled safely? Are they taking students and teachers’ temperatures? Performing random nose swabs for COVID infection?

If the answer is no, shut the place down right then and there. And issue a fine. People tend to be highly motivated by financial penalties.

But if the answer is yes, let the kids keep learning. (Considering the predicted learning loss from last spring and this fall alone, kids desperately need to be in class.)

To avoid accusations of targeting one religious group, visit every school, whether public, charter, private, Catholic, Jewish, Hindu or Muslim, and evaluate each on the exact same terms. Make those terms clear and transparent, the way the Department of Health does with restaurant inspections. List the violations — heck, take pictures of any issues — then enumerate what the schools need to change in order to be deemed in compliance.

When I say treat all the schools the same, I don’t mean, “If we close one, we close them all.” That’s not fairness. That’s facism.