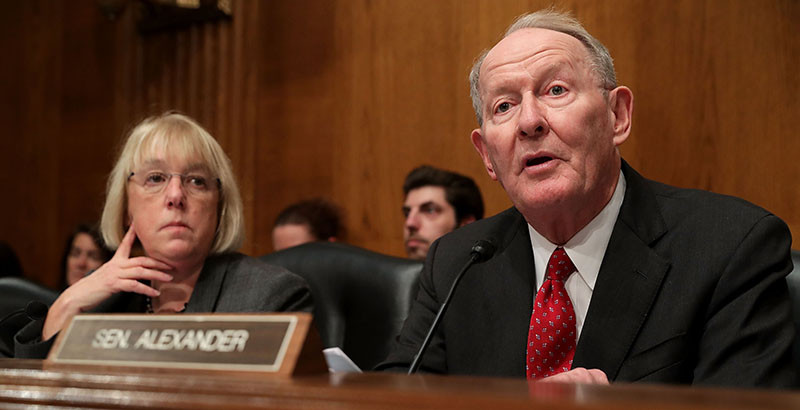 It started with the presence of dozens of Moms Demand Action gun control advocates, their bright red T-shirts a striking contrast against the pale marble of the Dirksen Office Building hallway and the windowless, staid hearing room of the Senate Health, Education, Labor and Pensions Committee.

State education leaders from Nebraska, Delaware, and South Carolina, along with an education advocate, had been called to testify before the committee Tuesday on “states leading the way” in implementing the Every Student Succeeds Act. Instead, about half of the hearing focused on using federal grants to arm teachers, which had sparked the protesters’ ire.

Huge line of ⁦@MomsDemand⁩ gun control protesters waiting to get into HELP hearing on #ESSA. Line was around the corner, and they’ve filled the room. ⁦@The74⁩ pic.twitter.com/BKwupXP4Nk

Outside the gun discussion, the hearing was in many ways a rerun of previous HELP Committee meetings on ESSA implementation: Few Republicans asked questions, while committee Democrats raised concerns about state plans failing to account for the performance of all students.

On guns, Sen. Elizabeth Warren, Democrat of Massachusetts, summed up her party’s position: “Allowing schools to use scarce federal dollars to put guns in classrooms is an idea that is dangerous and dumb, and it clearly wasn’t our intent when we wrote ESSA.”

The New York Times reported last month that Education Secretary Betsy DeVos was considering allowing states to use what are commonly known as Title IV grants, which fund a variety of education purposes from technology to mental health, to arm teachers. DeVos has subsequently told Democrats on the House Education committee that she won’t issue a ruling on the matter without further guidance from Congress.

Asked by committee Democrats, none of the witnesses said they were in favor of using federal grant funding to arm teachers, or that they were aware of any research that doing so makes schools safer.

Sen. Patty Murray, the committee’s top Democrat, called on congressional Republicans to make it clear to the Education Department that lawmakers didn’t intend to allow the grants.

“We should be doing everything we can to address gun violence and make our schools safer,” she said. “We need fewer firearms in schools, not more.”

Committee chairman Lamar Alexander, meanwhile, said that while he’s “not a fan” of arming teachers, the law “specifically gives states the decision about spending their money to create safe conditions, including drug and violence prevention.”

Another law, which authorizes grants for school safety through the Department of Justice and specifically excludes using the funding to arm educators, doesn’t preclude other laws from doing so, Alexander added.

When the two-hour hearing did focus on its scheduled purpose, many of the themes were familiar.

Murray again raised the issue of whether the Education Department has inappropriately approved ESSA implementation plans that don’t account for the performance of all subgroups of students.

Without ratings accounting for the performance of historically underserved groups of students, the achievement of English language learners, poor children, students with disabilities, and children of color can be masked by accountability systems that show their schools as a whole are doing well, she argued.

Democrats and civil rights groups have noted that ESSA requires subgroup performance to be incorporated in a system for schools that places them into different categories of additional support, including “comprehensive” for those that are broadly underperforming and “targeted” for those not serving particular groups well.

Many states have used a summative rating system, like an A-F grade or star ratings, to identify schools for “comprehensive” support. According to civil rights groups, not all of those states include subgroup performance in those ratings, which they say violates the law.

The department has argued that ESSA doesn’t require summative ratings, and therefore has balked at dictating how they’re set up. They say that states are required to use subgroup performance only when designating schools for “targeted support” due to underperforming subgroups.

ESSA was crafted on a “series of building blocks,” Murray said. If states don’t use that first building block to identify schools that need help, they can’t use the next one to intervene.

“I know we wouldn’t have written four different subgroups into the accountability title in the law if we didn’t expect schools to actually measure and report,” said Sen. Chris Murphy of Connecticut.

Plans for 49 states, the District of Columbia, and Puerto Rico have been approved; only Florida’s remains outstanding.

“The bargain that this Congress made with the states was in exchange for these dollars. You must implement the subgroup accountability mandate,” he said.

Alexander defended DeVos and the Education Department, saying he had consulted with career department lawyers who have served under both Democratic and Republican administrations, and the nonpartisan Congressional Research Service, and noting that “I believe that she is exactly following the law.”

In addition to defending the department, Alexander questioned witnesses about how they’re rating schools beyond tests, a requirement that at one point during debate on the law he considered scrapping amid concerns on overtesting.

Murphy also raised concerns about states’ use of evidence-based interventions to turn around failing schools, at least the third time that he has done so in the past two years. Language reminding states of their duties ended up in a report released in conjunction with the last Education Department spending bill.

“That was a really important phrase in that law, to make sure you’re not just repainting the walls of the school and claiming it’s an intervention,” he said.

Congress Uses New Funding Bill to Reassert Itself in ESSA Implementation, Nudging Use of Evidence for Struggling School Interventions

Murray also raised concerns that 23 states had been granted waivers to raise an existing 1 percent cap on giving alternative assessments to students with disabilities, possibly hiding schools that aren’t educating those children well.

“I really do worry about too many children with disabilities suffering from low expectations,” she said.

Alexander pointed out that the waivers were allowed under the law and that most were granted for only one year.

Two of the three state chiefs present said they had asked for and received waivers, largely to help in the transition of both their regular and alternative assessment systems.