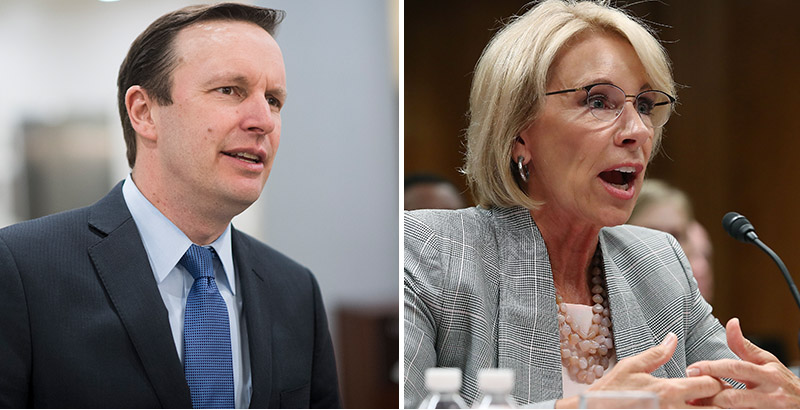 Murphy offered an amendment early Thursday to a pending Education Department spending bill to block the plan. Senate leaders ultimately didn’t include Murphy’s proposal in a final package of amendments adopted before the chamber passed the spending bill, 85 to 7, on Thursday evening. Murphy had said earlier that afternoon that the amendment was unlikely to get a vote, but he hoped lawmakers would consider it as they craft a final spending bill with the House.

The New York Times reported late Wednesday night that DeVos would allow states and districts to use a $1.1 billion catchall education funding program to buy guns. Congress has included prohibitions on using other federal school-safety grants to purchase firearms, but no such language exists about these grants. Arming teachers and “hardening schools” has been a favored response by President Donald Trump to this year’s high-profile string of school shootings, beginning with the February massacre in Parkland, Florida.

2 Injured in Shooting During Florida High School Football Game; At Least 42 Killed and 79 Injured at Schools in 2018

Murphy, whose district includes Newtown, Connecticut, where 20 first-graders and six adults were killed in a shooting rampage at Sandy Hook Elementary School in 2012, has been DeVos’s chief antagonist on guns in schools since her 2017 confirmation hearing, when she infamously stated that rural schools might need guns to protect against grizzly bears.

Murphy’s proposed amendment would block the funds in question from being used “for the provision to any person of a firearm or training in the use of a firearm.”

The Dept of Ed funding bill is on the floor right now and I’m introducing a last minute emergency amendment today to stop Devos’s plan to arm teachers.

My lord – we can’t let this happen.

Schools can’t afford to give classrooms their own supplies.

Show that you give a damn about students. https://t.co/zkHJJuPNeT

“It’s horrifying. It serves no one, I guess, other than the gun lobby and the manufacturers. None of the stakeholders [including parents, teachers, and students] want it,” Mark Barden, founder of Sandy Hook Promise, a group created by the families of the Sandy Hook victims, told The 74.

The group promotes a “know the signs” program to train students and teachers on how to recognize warning signs of potentially violent students and report them to school officials.

“There’s no need to be throwing all these guns into minimally trained education staff, when we have the solution available to them at no cost, and it’s to train students,” he said. “It’s all about prevention.”

Only Sen. Lamar Alexander, the Republican chair of the Health, Education, Labor and Pensions Committee, seemed even a little open to the plan.

“I’m not a fan of arming teachers, but the safe-schools block grant for many years has allowed states to make the decision about how to use those federal dollars to make schools safer for children,” he said through a spokesperson.

The State of School Security Spending: Here’s How States Have Poured $900 Million Into Student Safety Since the Parkland Shooting

Murphy’s proposal would alter a pending amendment offered by Sen. Ted Cruz, Republican of Texas, that would allow the funds to be used for infrastructure and technology upgrades to boost safety, like metal detectors, and systems to notify law enforcement. Cruz’s amendment made no mention of using the funds for guns.

From School Security to Opting Out: 7 Interesting Pending Amendments to the Senate Education Spending Bill

In addition to blocking the grants from being used for guns, Murphy’s amendment would essentially gut Cruz’s proposal and instead encourage the funds to go toward things like mental health providers and violence prevention programs.

Education Week reported Thursday morning that the idea originally came not from DeVos but from Texas officials, who asked whether the money could be spent on guns. The Education Department told Ed Week that the Times story is getting “blown way out of proportion” and that they don’t comment on “hypothetical scenarios.” KPRC in Houston reported this week that 228 of the state’s more than 1,000 school districts had adopted programs this year allowing them to create their own policies and requirements around teachers and faculty carrying weapons.

The Trump Administration, in response to the Parkland shooting, established a school safety commission, which DeVos chairs. It has so far focused on issues like behavioral interventions and violence in the media, with the education secretary taking heat after telling Congress in June that it would not look at the role of guns in school safety.

The Times reported that the funding in question is part of the Student Support and Academic Enrichment grants, known in education circles as Title IV for their location in the Every Student Succeeds Act. The grants, which the Trump Administration has twice proposed eliminating, are aimed at three broad purposes: providing students with a well-rounded education, supporting safe and healthy students, and supporting the effective use of technology.

The Democratic leaders of education committees, who with Alexander helped write ESSA, said using the grants to arm school personnel violates the spirit of the program, which is meant to nurture safe environments.

Sen. Patty Murray, the top Democrat on the HELP Committee and the appropriations subcommittee with oversight of Education Department spending, called the proposal “absurd and appalling.”

“Using these funds to add more firearms into schools is not only the opposite of what Congress intended, it is wrong and will make schools more dangerous and students less safe,” Murray said in a statement.

Rep. Bobby Scott, ranking Democrat on the House Education and the Workforce Committee, called on Congress to step in and stop the plan.

“The administration is openly violating the spirit of the law as well as common sense about gun safety. If it is unwilling to abandon this proposal, Congress must step in to protect students and educators from the consequences,” he said in a statement.

Ken Trump, a school safety expert of no relation to the president, told The 74 that the money is better used in other ways.

“They’ve come nowhere close to restoring a balanced and comprehensive school safety policy like we had in the years after Columbine, so they should work on getting that right first,” he said.

The proposal also could open the federal government to liability if a teacher inappropriately uses a federally funded gun in school, Trump said.

If more guns are needed on campus, they should be carried by trained law enforcement officials, he said.

“If you want to have an armed presence on campus, hire a trained professional, public safety official,” he urged.