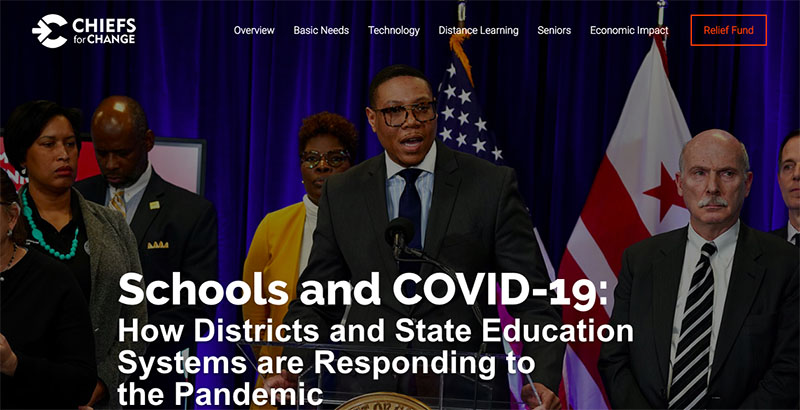 As educators around the country continue trying to keep students engaged during the coronavirus shutdown while also bracing for what could be the worst economic slump since the Great Depression, 29 state education commissioners and district superintendents have a message for federal officials: Schools need more support.

The group — eight state education commissioners and 21 district superintendents — comprise Chiefs for Change, an education reform advocacy organization that, since its inception, has shifted its agenda from promoting Common Core standards to focusing on big urban school districts. Its constituency includes the superintendents of Chicago Public Schools, the Philadelphia School District and New Orleans Public Schools.

74 Interview: Pulling All the Levers — Chicago Public Schools CEO Janice Jackson on Getting More Students to and Through College

Last week, Chiefs for Change published “Schools and COVID-19,” a document that makes some pointed requests of the federal government while also spotlighting the ways that some of its members are helping local communities.

In Guilford County, North Carolina, for instance, where 22 percent of families fall below the poverty line, Superintendent Sharon Contreras has turned 75 school buses into hotspots for kids who don’t have internet access at home. In Washington, D.C., Superintendent Hanseul Kang has opened six emergency child care facilities for the families of hospital workers, and on the other side of the country, in the state of Washington, the Highline school district outside of Seattle has given 10,000 devices to students who need them.

But significant challenges still remain for school leaders moving forward, and Chiefs for Change says the federal government should step up.

“[They] must give districts the financial resources and regulatory clarity to get through the months and years ahead,” said Robert Runcie, superintendent of Florida’s Broward County Public Schools. “We need much more help.”

For starters, the report points out that the $13.5 billion allocated to K-12 schools in the recently enacted stimulus package is paltry compared with the $80 billion doled out in the 2009 stimulus package after the Great Recession. The help being given by federal officials today is “woefully insufficient,” the authors write, adding that it’s “not nearly enough to meet the extraordinary needs of schools, students, and families struggling to cope with the wide-ranging effects of COVID-19.”

The request follows on the heels of an April 6 letter sent from a dozen other education groups, including two national teachers unions, to congressional leaders requesting $200 billion for schools to help manage the coronavirus. State revenues supporting schools are expected to plummet due to the economic collapse; on Sunday, New York Gov. Andrew Cuomo warned that state funding for schools could be cut in half.

The report also asks the FCC to pressure telecommunications companies to commit to suspending policies requiring that families pay off outstanding balances prior to restoring the internet services children need to learn remotely. Chiefs for Change CEO Michael Magee addressed a letter to FCC chairman Ajit Pai — and another to telecoms companies — in March requesting as much, and he raised the issue on an end-of-month call with Vice President Mike Pence, Education Secretary Betsy DeVos and the leaders of other education groups.

“Many families can’t take advantage of free Wi-Fi programs being offered because they have old, outstanding balances on accounts, which are prohibiting them from signing up,” Magee said. “Enormous numbers of low-income families are affected. That’s a policy that the FCC could waive now.”

Chiefs for Change hasn’t received responses from anyone at the federal level — not about the funding, not about the telecoms policies — but as time passes, and educators start turning their attention toward plans for next year, the need for more federal support will only grow, according to Magee.

“Depending on the guidelines issued by states and the CDC, districts might have to dramatically reconfigure school buildings,” he said, referring to rules about social distancing between students. “That cost is unclear.”