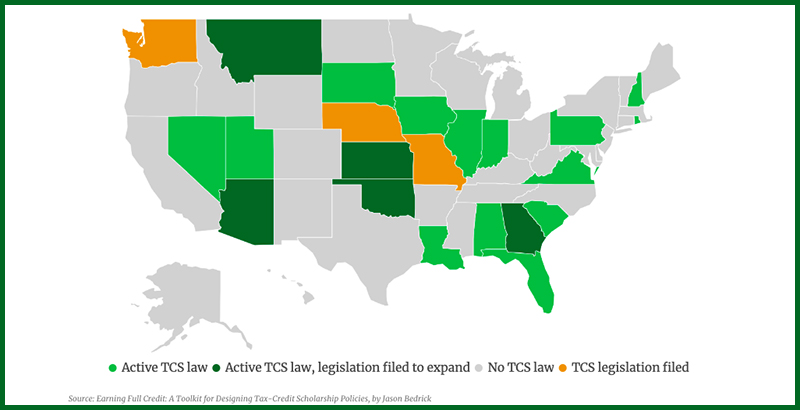 But on the heels of Espinoza v. Montana Dept. of Revenue, a Supreme Court ruling from June 2020 in which a 5-4 conservative majority ruled that states could not constitutionally exclude religious institutions from participating in programs that subsidize private school tuition, and in the throes of a deadly pandemic that has led many families to seek new education opportunities, a number of state governments are now expanding programs that provide publicly funded scholarships for private schools.

Though DeVos’s efforts to re-route CARES Act money to private schools were thwarted in September by a federal judge, 19 states already fund private school choice through policies known as tax-credit scholarships. Now in 2021, over a quarter of those states are moving to expand their programs — and three new states, Missouri, Washington, and Nebraska, have introduced legislation to create programs of their own.

And despite the 180-degree departure the Biden administration is taking from DeVos’s stance, the legal landscape on private school choice seems to have shifted since the Espinoza ruling to facilitate the enactment and expansion of these policies.

In December, a school choice advocacy organization called the Pioneer Institute released a toolkit, with a foreword written by plaintiff Kendra Espinoza, to guide states on crafting their own programs. The report’s author, Jason Bedrick, who works as director of policy at EdChoice, said that the ruling eases the legal barriers to enacting tax-credit scholarship policies.

“The Espinoza decision is clarifying and may open some doors in some state legislatures,” he told The 74.

In 2021, Bedrick said, there have already been “far more” educational choice bills introduced in state legislatures than usual, and many are “more ambitious and expansive” than in prior years. While this uptick may be driven in part by school shutdowns in the face of a pandemic, “Espinoza is certainly a part of the equation,” Bedrick said.

To Nebraska state Sen. Lou Ann Linehan, whose state is one of only three that has neither private school choice nor charters schools, the ruling was a game changer.

“I was ecstatic” when the Supreme Court released its decision last June, she told The 74.

In years past, Linehan had proposed bills for private school choice using the tax-credit model, but they were blocked by filibuster. The “Opportunity Scholarships Act,” however, which she introduced on Jan. 13 and funds private school scholarships for families of the over 148,000 Nebraska students eligible for free or reduced-price lunch, has been met with an entirely different reception.

Her bill already has 14 co-sponsors, including a leading labor union leader, and has been recognized as a line item in the governor’s budget.

The legislation has a hearing scheduled for Jan. 28, and then will still need to pass through the state’s single legislative body before it can be signed into law by the governor. But Linehan is optimistic.

“I think we’re at a tipping point,” she said.

Many state constitutions, including Nebraska’s, stipulate bans, known as “Blaine amendments,” on allocating tax dollars for religious purposes. The laws derive from 19th-century efforts to bar Catholic families dissatisfied with Protestent-oriented public schools from obtaining a share of funding. Post-Espinoza, Bedrick explained, those rules no longer can deny religious schools, which make up roughly two-thirds of all private schools nationally, from participating in tax-credit scholarship programs.

“Espinoza clarifies that school choice programs would be constitutional under a Blaine amendment,” he explained.

In Missouri and Washington, which also have Blaine amendments on the books, the newly introduced bills to establish tax credit scholarship programs are scheduled for hearings later this month.

In the past, legal battles over these programs have tended to fall along partisan lines. In Nevada, when lawmakers attempted to scale up policies for private school choice in 2017, Democrats blocked the efforts. Arizona, too, saw partisan squabbles over its choice policies, but despite legal setbacks, the state is now poised to expand its tax-credit scholarship program. 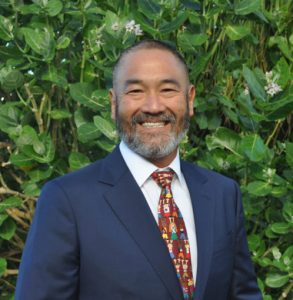 “We all benefit from high-quality public schools, regardless of whether your own child attends them,” Nozoe told The 74 over email. “Tax credits… reduce the pot of revenue the public depends on to sustain their schools.”

The scholarship policies rely on tax credits — from 50 up to 100 cents on the dollar, depending on the state — in return for contributions to assist with private school tuition. The high return rates are “incredibly unusual,” says Carl Davis, research director at the Institute on Taxation and Economic Policy. Most other credits, he said, such as for donating to a soup kitchen, save only five to 10 cents on the dollar for state taxes.

“If a taxpayer makes a contribution,” explained Davis, “and then gets all their money, or nearly all their money back from their state government, ultimately that money has come out of the state coffers, not out of that taxpayer’s pocket.”

To Davis, the difference between tax-credit scholarship programs and private school vouchers is purely mechanical. Both programs result in publicly subsidized private school education. Tax-credit scholarship policies simply introduce a “middleman” to do so, he said. Though some state legislatures have, on occasion, revisited and eliminated tax-credit programs when the political tides turn, Davis harbors concerns that tax credits can fall into a less visible category of fiscal policy than many other expenditures, such as vouchers.

“When you get a tax credit inserted into the tax code.… it doesn’t have to be voted on every year or two as part of the appropriations process in setting a budget,” he explained. “It’s put on autopilot and it just becomes part of the background of the tax code.”

Linehan, however, isn’t concerned with the expenditure, arguing that her Nebraska scholarship policy would not pose a threat to public school budgets. The proposed $10 million in tax credits — which amounts to approximately one quarter of one percent of the state’s total education budget — is insubstantial, she said, compared to overall spending. The tax revenue that the program directs toward tuition would be less than what the state spends per pupil in funding, she said, meaning that the program could actually lead to savings.

“Every child, if they have a way to get to a better place, we ought to let them do that,” said Linehan. “Especially when it doesn’t cost the state hardly anything compared to our budget.”

Bedrick, too, is optimistic about the fiscal side of tax-credit scholarships.

“These programs actually have positive effects on the state budget,” he said, pointing to studies that show savings of up to $3,000 per scholarship, generated through the same mechanism cited by Linehan.

Revenue neutral tax credit programs make for a “nice talking point,” he said. “But those aspirations rarely account for a district’s fixed costs … or for the reality that a large percentage of benefit recipients might already be attending private schools.”

Nebraska’s proposed legislation would only cover low-income students seeking to move from public to private schools, not those who are already enrolled in private schools, but other states’ programs vary in their restrictions on scholarship recipients.

Before the IRS resolved a loophole in 2019, some tax-credit scholarships allowed donors to turn a profit for their contributions by cashing in first on state tax credits and then again on federal tax deductions. One religious school in Georgia advertised to potential donors on its FAQ page that “you actually stand to make money on this program.” 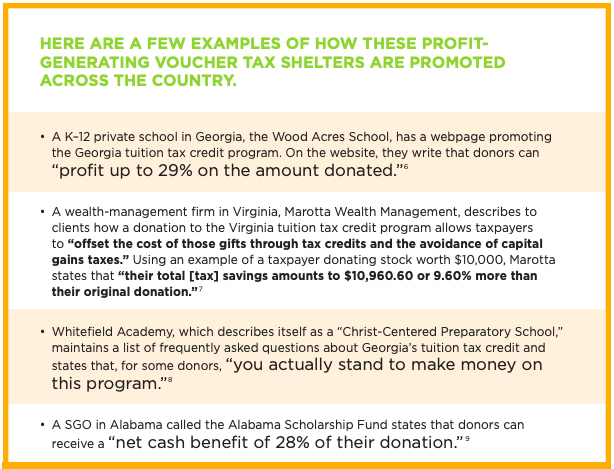 At its core, the debate over tax-credit scholarship policies is a clash over perhaps the most fundamental question in public education: Should states invest in improving struggling public schools that already exist, or should they help students from failing schools jump ship in search of better educational opportunities at charter schools, magnet schools, and private schools? 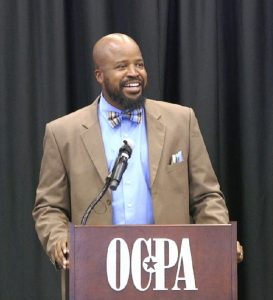 To Keith Jacobs, who manages charter school initiatives at Step Up for Students, a nonprofit that helps administer the Florida Tax Credit Scholarship for lower-income families, the answer is clear. He sees his mission as empowering marginalized students and families to seek out the educational opportunities that will propel them toward success.

“Too often, lower-income families are bound to attend their district schools that are assigned by ZIP code,” Jacobs told The 74 over email. Jacobs lauds private school choice in his state because it “provides these families the opportunity to choose a school that best meets the needs of their children.”

One study on Florida’s tax-credit scholarship program, which is the biggest of its kind in the country, found that participating students earned bachelor’s degrees at a rate 20 percent higher than other students in the Sunshine State.

In the midst of a deadly pandemic that has pushed many schools remote and caused dangers such as suicide, malnutrition, and severe learning loss to spike among young people, the argument for school choice is all the more pressing, said Jacobs.

“The pandemic has further exposed the need for flexible learning options. As we shift to more customized learning experiences, we want to ensure that lower-income families are not excluded,” he said.

“The priority is to ensure that the families with the biggest income needs are first in line to receive the scholarship.”

To Bedrick, who distributed his report on tax-credit scholarships to numerous state partners working to develop such policies, the path toward equity includes opening up scholarship programs so that as many students as possible qualify to participate.

“These programs are meant to empower every family to choose the school that works best for them,” said Bedrick. “We would advise having a universal program.”