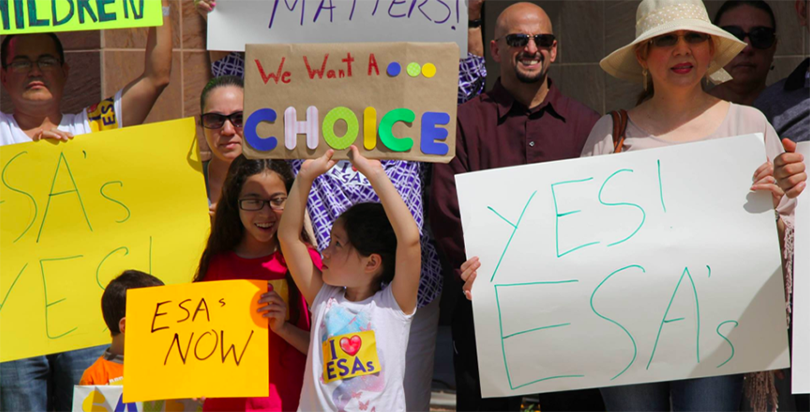 What promised to be the largest expansion of school choice for any state in the country is history after Nevada legislators refused to fund the program last weekend before the end of session. Heated budget negotiations culminated in a compromise deal Sunday night to give $20 million in tax credits toward Nevada’s Opportunity Scholarship program, but nothing for the state’s Education Savings Accounts.

“Unbelievable. I have no words. Shameful.” Republican Assemblyman Jim Marchant wrote on Twitter.

Opponents of Education Savings Accounts celebrated the deal as a win for public education.

“This has been a tremendous legislative session. Our representatives demonstrated that they are committed to improving our K-12 education system and that they are willing to put our children first and above politics,” said Educate Nevada Now Policy Director Sylvia Lazos in a statement. “Most importantly, this was a big win for our students!”

How the ESA fight and fallout went down:

MONDAY, MAY 29: Republican lawmakers leave a negotiating session thinking a compromise on ESAs is a good bet, the Las Vegas Review-Journal reports. But Democrats call a last-minute hearing and put in a surprise amendment to ESA legislation that includes eliminating the historic universal eligibility provision and putting restrictions on participating schools. Budget negotiations stall. Republicans and Gov. Brian Sandoval threaten not to support any budget bills unless Democrats restore ESA funding.

THURSDAY, JUNE 1: Republicans hold up a major construction bill, which requires a two-thirds vote, over ESA funding. Republicans also delay a marijuana sales tax bill that could raise more than $60 million for schools.

The vote on SB487 shows it is not just party politics over ESA funding. Some GOP lawmakers are not fans of recreational pot. #RJnow #NVleg

SATURDAY, JUNE 3: Nevadans on both sides of the ESA issue stage protests.

SUNDAY, JUNE 4: Legislators reach a compromise to allow a one-time $20 million in tax credits for the state’s Opportunity Scholarship program, which was originally capped at $5 million in 2015. Those donations will provide more than $7,000 in individual scholarships for students whose families earn less than 300 percent of the federal poverty level. Under the deal, there is no funding for ESAs. Dozens of bills finally pass in the late hours of Sunday night and early Monday morning.

The Parents for SB506 (the ESA bill number) Twitter account posted a series of videos from a Las Vegas demonstration by pro-ESA families.

An anti-ESA protest outside the legislature showed Nevadans holding signs that read “Public Schools an American Legacy” and “Show DeVos Who’s the Boss.”

Some saw this as a win against federal priorities for expanded school choice. President Trump’s proposed budget would remove billions from the Education Department and send money to choice programs, including $250 million for vouchers, which Secretary of Education Betsy DeVos strongly supports.

“Nevadans expect their legislators to stand up for their values while finding common ground and reaching across the aisle for the good of this state,” Ford, a Democrat, said in a statement. “I’m proud that we’ve been able to work in a bipartisan fashion to close out this session with these important pieces of legislation.”

But groups like the Nevada School Choice Partnership hinted that this is not the last hope for ESAs.

“We want to make it clear that the system once again failed kids in Nevada in a bipartisan way. Leadership had a chance to fund this program, which is in high demand. We are deeply disappointed and will continue fighting until all Nevada students have the opportunity they deserve to attend a school that works for them,” the organization told The 74 in a written statement.

Nevada passed the Education Savings Accounts program in 2015, when the Legislature was Republican-controlled. It was the most sweeping ESA proposal in the country, allowing any family, regardless of income, to receive nearly $5,000 in state funds to use for private schooling. But lawsuits quickly followed from groups worried about diverting money from public schools and using taxpayer dollars to fund private education with no public accountability, and the Nevada Supreme Court ruled the funding mechanism unconstitutional.

Even so, more than 8,000 families signed up — far more than Sandoval’s $60 million could pay for.

This session, Republicans made funding the program a priority. But by that time, the Democrats had gained control of the Legislature.