Williams: Despite Our Desperation — and the President’s Insistence — Facts Don’t Support Schools Safely Reopening This Fall 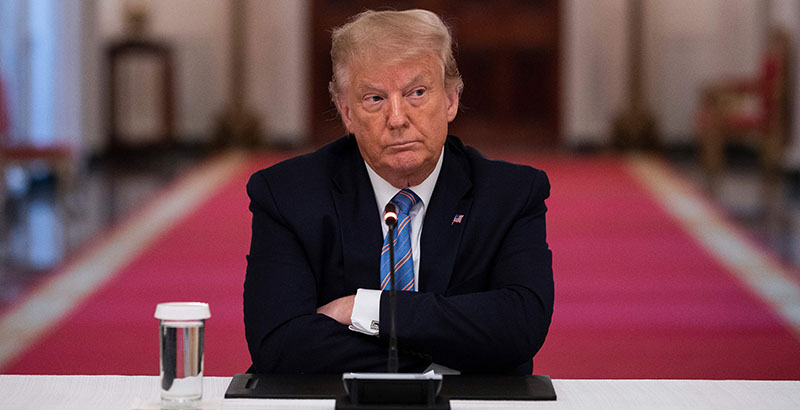 One of the (only) nice things about being a climate change voter is that you grow accustomed to living with urgent, compelling and — yes — inconvenient facts. There’s nothing pleasant about facing the increasing evidence about the consequences of our collective choices.

We’re victims of comfort, as the song says, and it hurts to face the fact that our cars and air conditioners and dietary choices and air travel, etc., are driving the problem that’s putting all of us at risk. Still, you build up a certain inoculation against self-deluding, motivated reasoning, and that’s useful when you encounter persistent counter-evidence in other arguments.

For instance, if, like me, you have multiple children at home and your partner and you are both juggling parenting and full-time work in the current pandemic, you might really want to believe that child care centers and schools will be able to normally reopen this fall. Four months into lockdown, my kids are desperately lonely. Shoot, I am lonely. Even as a privileged, highly educated dad, I’m only kind of holding up under our family’s daily grind.

What’s more, as a researcher who works on educational equity, I’m gutted by the pandemic’s unequal impacts on Black and brown children and families. Kids are suffering now, and that will have enormous consequences for their futures.

I am desperate for a hint that the fall could bring a return to normalcy. I’m living a version of New York Times columnist Michelle Goldberg’s description of the pandemic’s work-family juggle: “a crushing burden that’s destroying careers, mental health and family relationships.” And yet, despite the Trump administration’s sudden interest in demanding that all states and school districts open their schools for in-person education in the fall, the country’s otherwise scattered response to the pandemic is bearing predictable fruit — a first wave that never really ended amid recent local and state spikes in new cases. It’s increasingly clear that most schools and child care centers won’t be able to reopen safely in the fall, perhaps not even part time.

The facts on this aren’t just inconvenient; they’re brutal. The United States’ failure to comprehensively respond in the spring has left us with the world’s worst pandemic outbreak. We’ve lost more than 130,000 lives—more than twice the number of people lost in the Vietnam War. Meanwhile, because states like Georgia, Florida, Arizona and Texas flounced early out of their loose, short lockdowns, the country’s outbreak appears as likely to worsen as improve. Given that there’s no reasonable likelihood of sealing states’ borders, their ineptitude means that the success of relatively healthier states is also at risk.

As of July 9, The New York Times reported that new COVID-19 cases are increasing in 36 U.S. states. We are not on a course to a safer, healthier fall. We have little evidence that federal leaders have any plans to ever get us on such a course — let alone in the next eight to 10 weeks.

I want to believe that our pandemic situation will look better by the fall, but right now it looks likely to be worse.

How can we open schools if we haven’t actually contained the pandemic? Some in education — especially we exhausted parents — have taken refuge in findings that children appear to be less likely than adults to contract the virus or suffer particularly severe infections. The American Academy of Pediatrics relied heavily on this claim when it suggested that schools should open for in-person instruction this fall.

And yet, several studies have warned that infected children appear to be able to transmit the virus, even when they do not exhibit symptoms. “Viral loads in the very young do not differ significantly from those of adults,” concluded one study. “Children may be as infectious as adults.”

Further, even if COVID-19 may pose less of a risk to children than to adults, schools can’t reopen without millions of adults returning to classrooms, front offices, school buses and a host of other settings. Some believe that delayed closing of schools cost teachers and other school workers their lives in New York City. Even under proposals for partial in-person school reopening, educators and school staff would face additional risks. Polling suggests that large percentages of Americans — perhaps as high as 60 percent of families and 20 percent of teachers — aren’t yet willing to return to K-12 campuses. It’s hard to imagine how to re-establish in-person public education when large chunks of the public — and public school teachers — aren’t sure they’re ready.

Indeed, research suggests that the virus spreads most easily when people gather together indoors. “Sharing indoor space is a major [COVID-19] infection risk,” concluded a study of the early spread of the virus. Another study found that COVID-19 was almost 19 times as likely to be transmitted via indoor gatherings as outdoors. And last week, the World Health Organization announced that airborne transmission of the coronavirus may be possible — particularly when people gather in poorly ventilated indoor spaces.

Schools have reopened in other countries, but early returns about safety are mixed. Again, most have dramatically better public-health statistics than ours. On May 11, the day that France, which has a population of more than 65 million people, began reopening schools, the country reported 456 new COVID-19 cases. On the same day, New York state, which has a population of not quite 20 million people, reported 1,610 new COVID-19 cases. To date, France has reported about 300 virus cases per 100,000 residents. New York has reported about 2,000.

Second, even if the U.S. manages to improve its public-health situation, it’s not clear that this will be enough to ensure a safe reopening of schools. Aside from some early public-health setbacks, France has been able to keep schools open. But other communities have not been so lucky. Israel reclosed some schools after a spike in COVID-19 cases. Beijing recently shuttered its schools again as the pandemic returned. What’s more, data from open American child care centers are not all encouraging. Texas recently reported more than 1,300 new cases of COVID-19 among child care workers and children in the past month. And school sports practices have recently been halted again by new outbreaks in some of the U.S. communities that restarted them.

Meanwhile, states like Massachusetts and New Jersey are still insisting that they’ll somehow just figure it all out. It’s hard to see how. As state and local education budgets shrink in the pandemic’s economic swoon, education leaders across the country will likely lack significant funding to retrofit schools to make them safer.

Without dramatically more funding, will these states be able to launch something that they can credibly call “in-person schooling?” Maybe. But it won’t be safe, full-time, full-enrollment schooling. Assuming they can pull something off, it will be tightly disciplined, highly regimented and light on the social aspects that are so critical to making in-person schooling function. We don’t just want in-person schooling to help us work. We want it to advance children’s social and academic development. Why would we expect part-time school (at most a day or two each week, in many districts’ proposals) conducted by tense, masked teachers charged with maintaining tight social distancing controls to meaningfully deliver on those goals?

Believe me, I get the yearning to set these facts aside. But I’m not willing to let my wants filter out these facts. The pandemic is far from over in the United States, and we’re a long way from a public-health scenario where in-person schooling is likely to be safe.

To be clear, we have no good choices. We know that large-scale online instruction isn’t suddenly going to become highly effective. We know that the mental well-being and academic development of kids — especially historically marginalized kids — will suffer during lockdown. We know that most working families are in vulnerable situations. We know that the economy can’t really reopen until schools provide something close to full-day, full-time, in-person care. We know that many more teachers, children and families will be exposed to the virus if we ignore the risks and demand that schools reopen. We know that, as medical experts and epidemiologists have argued in the New York Times and Washington Post, we probably won’t see rapid improvement in our outbreak numbers if we insist on simultaneously reopening other parts of the economy that facilitate transmission (bars, restaurants, other indoor gatherings). We know that keeping those parts of the economy closed will further punish many working families who were already navigating economic precarity.

It’s time to face the central fact of a pandemic: There’s no way to pretend our way around flattening the curve. Until we actually stop the virus’s spread, efforts to reopen schools in most communities will fail.

It’s worth noting that the desperation of our current situation is largely a result of willful self-delusion. Leaders in Washington, D.C., were — and still are — unwilling to acknowledge and address the gravity of the pandemic lest it upset their political standing or the state of the economy. Now that that ruse has predictably, catastrophically failed, the least the rest of us can do is insist on being honest about our remaining terrible options.