States and Cities Lean Into Reopening Elementary Schools First As Data Affirm Lower Risk for Students, But Not Necessarily Teachers 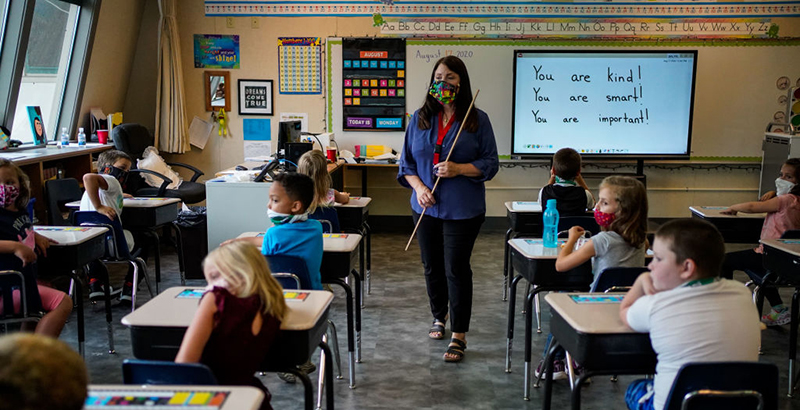 Data affirm lower COVID-19 risk for younger students, but not necessarily for their teachers. Above, a masked teacher leads her Weaverville, CA classroom. (Kent Nishimura/Getty Images)

After months of highly politicized debates, and as coronavirus cases and deaths continue to rise, a new consensus is emerging on how to keep schools open during a pandemic: prioritize the youngest students for in-person instruction.

This has been the guiding principle behind recent COVID-19 plans from governors in Michigan and Rhode Island and New York City’s mayor, along with leaders in multiple other prominent urban school systems. Districts such as Chicago, Philadelphia, and Washington, D.C. have either begun in-person learning for younger students, or plan to bring young children back first when reopening occurs.

Last week, President-elect Joe Biden weighed in on the matter, telling CNN that “we can safely open those elementary schools,” if Congress provides the needed additional funding.

Preliminary case numbers among students seem to back the approach of bringing back the youngest learners first. In New York City, the nation’s largest district, where elementary students return to the classroom tomorrow after the city briefly shuttered schools before Thanksgiving, results from the city’s plan to randomly test 20 percent of students and staff for the virus every week may become a proof-point for this model.

Existing data, however, raise what could be an important caveat. While in-person learning appears to be relatively safe for elementary and middle school students, the risks may not be reduced for teachers.

“[School staff] are experiencing a completely different trend than what the students are,” said Rebekah Jones, who runs a national tracker of school coronavirus cases called the COVID Monitor.

Jones, a former Florida Department of Health data scientist, has emerged as a contradictory voice in the debate over K-8 in-person learning. Jones has said she was fired for standing up against demands from her superiors to manipulate her state’s COVID-19 data.

According to data from her tracker, which is run in partnership with Florida COVID Action and financial literacy nonprofit FinMango, the rate of positive cases for high school students is nearly three times that of elementary school students, which aligns with reports from many locales. In Michigan, for instance, where as of Nov. 15 there had been 200 documented school outbreaks, 49 percent of those incidents and nearly two-thirds of cases were associated with high schools, said Lynn Sutfin of the state’s Department of Health and Human Services.

But while student case rates vary significantly by grade level, Jones’s data show that the rate of infection among staff stays relatively constant between elementary and high schools, meaning, she said, that the assumed reduction in coronavirus risk for young children does not seem to carry over to the teachers in their buildings.

“If you’re concerned about staff exposure, then elementary schools aren’t that great,” she told The 74.

New York City is one of the few large urban districts that did bring back a percentage of its 1.1 million K-12 students this fall for some level of in-school learning and during that time it conducted random monthly COVID-19 testing. Before the Nov. 19 shutdown, the results identified a positivity rate of only .28 percent among students and staff.

The COVID Monitor, however is not the only coronavirus school tracker that displays worrisome numbers for elementary school staff.

While Jones has criticized the work of Brown University professor Emily Oster, the author of prominent op-eds in The Atlantic and The Washington Post arguing that schools are not the locus of COVID spread, the same finding on teacher infection rates holds true in Oster’s COVID-19 School Response Dashboard, which accounts for over 1.6 million in-person learners and 540,000 staff.

But Oster does not chalk those numbers up to school-related spread.

“The reason for [the comparable rates among teachers across grade level] is likely that infections are occurring outside school,” she told The 74 over email. “So it just suggests the outside activities are similar in the two groups of teachers.”

Graphics that Oster published in The Washington Post in November, however, indicated that teacher case rates at all school levels tended to fall above community case rates.

Still, preliminary studies, such as a recent look at youth vs. adult antibody responses to COVID-19, seem to support Oster’s argument, indicating that the virus may take hold less frequently and more weakly in children. If that were true, those students could be less likely to infect the people around them. However, the study’s authors caution that definitive conclusions about youth infectiousness or transmission would be inappropriate.

For now, health experts say, schools’ best course of action is to follow the protocols of mask-wearing, ventilation, and social distancing. Mask mandates alone, based on statistics from Florida, are associated with a 38 percent drop in positive cases.

“All these [safety precautions], when done appropriately like public health has been preaching, actually work,” he said. “It’s a success story.”

Still, based on the data in her tracker, Jones believes the threats remain potent — especially for teachers.

“There should be a choice for teachers to say ‘I don’t want to take this risk. And I shouldn’t lose my livelihood because I don’t want to die,’” she said.

Students, however, have been borne the brunt of school closures, with early studies indicating that many have lost 183 days in reading and 232 days in math during remote learning. In extreme cases, entire classes have fallen behind and student setbacks go beyond academics, with lost access to food and mental health services. Educators’ fears of catching the virus have at times pitted demands from teachers unions to keep schools remote against the needs of stressed-out families and concerned parents. In New York City, for example, strong parent advocacy for in-person learning played a key role in officials reversing the Nov. 19 school shutdown.

As a creative solution, Jones suggests “us[ing] the shuttered middle or high school facilities to spread out students more.” Sutfin of the Michigan health department had not heard of such a plan in her state, but Dr. Chan said that in Rhode Island schools are encouraged to spread out to empty facilities.

For districts like New York City, however, such moves may be impossible, as Mayor de Blasio says he plans to bring all students back to school in January. He is also asking reopened elementary schools to do away with blended learning models in favor of five-days-a-week in-person instruction. Space and staffing shortages have already complicated that transition, including because about 23 percent of the city’s teachers with underlying health conditions or at-risk family members have been granted medical accommodations to work remotely.

For Jones, who found that 50 percent reductions in class size in Florida were associated with around a 40 percent drop in infection rates, the clear first step is to push older students remote, wherever possible. She lauds leaders who have made the choice to prioritize younger students and students with special needs for classroom learning.

“That’s what I’ve been saying for months,” Jones said.