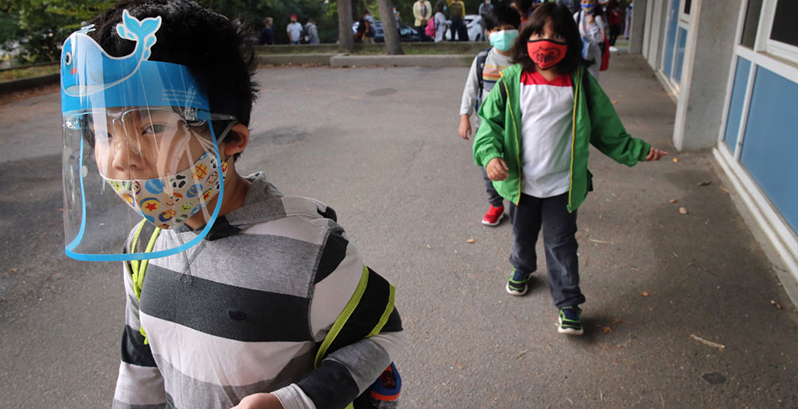 A new study continues to build the case that the risks of in-person learning for elementary and middle school students may be lower than many officials originally feared, but comes just as surging coronavirus cases nationwide are prompting multiple districts to delay reopening.

The paper, published in the journal Nature Immunology, examined 47 youth and 32 adults who had been infected with the virus, finding a reduced antibody response among children. Counterintuitively, this result is good news for kids, as it indicates that COVID often did not take hold as strongly within children’s systems and seems to offer a scientific counterpoint to the highly politicized debates over school reopenings during the pandemic.

This past week, however, the pandemic has risen to crisis levels across much of the nation. Reaching an alarming record of 160,000 new cases on Thursday only a week after first hitting 100,000 in a single day, hospitals are now warning of dwindling bed spaces and rationing care. Where conditions are most dire, like in El Paso, Texas, coroners are deploying mobile morgues.

The spread of the virus has prompted many school systems — especially urban districts such as Philadelphia, San Diego, and Washington, D.C. — to push back reopening plans. Boston and Chicago remain closed and the spike has brought New York City schools, the largest in the country and one of the few big city districts to reopen for in-person learning, to announce a second school shutdown on Wednesday.

Beyond the current third wave, however, districts will have to confront bringing students back and the Nature Immunology study’s results may augur well for younger students returning to the classroom first.

“It does suggest that … as long as extensive precautions are taken, in-person learning may be possible,” Dr. Donna Farber, an immunologist at Columbia University and a co-author of the study, told The 74.

The paper helps put the pieces together on a number of previously unknown questions surrounding school reopenings. First and foremost, it helps explain why young children seem to transmit COVID less than adults. The lessened antibody responses observed by Farber’s team indicate that the virus rarely gains the same foothold in children as it tends to in those who are older. That has implications for transmission.

This conclusion aligns with the friendly stances a number of prominent public health experts have recently taken toward school reopenings, particularly when weighed against the demonstrated harm distance learning has had on students, especially the most vulnerable. Earlier this month in an interview with Education Week, Dr. Ashish Jha, dean of Brown University’s School of Public Health, said that “schools need to be bolder” in their reopening strategies, given the proper safety measures. Jha has also spoken out on Twitter about the oft-overestimated risk of in-person learning. And last month, The Atlantic published an article arguing that fears that schools would be COVID “super-spreaders” were likely overblown.

Oh – you know where we are NOT seeing a lot of spread?

Schools aren't immune but we are likely overestimating their danger.

We really do need to open more schools

BTW private schools across nation largely open, public not. But I digress

But the decision to risk exposure to the coronavirus through reopening schools is tricky, and the Nature Immunology paper helps build the case that health risks may tend to vary by student age, a concept described by experts as a “gradient in infectiousness.” This differential response stems from the way human immune systems develop.

She explained that younger kids produce cells called “new T-cells” that respond when germs previously unseen to the body enter their system. Adults on the other hand rely on “memory T-cells,” meaning they protect themselves based on the pathogens with which their immune systems are already familiar. Additionally, kids tend to be exposed to a vastly greater number of common colds than adults, many of which are caused by other coronaviruses, which could also help them block COVID-19, according to another new study. But during high school, immune responses tend to change.

“When you’re an immunological adult is probably less than 18,” said Farber, providing some intuition on why COVID outbreaks could be more likely in the upper grades and have been rampant in college-age settings.

That’s precisely how observed cases have played out. According to data on 200,000 school students across 47 U.S. states gathered by economist Emily Oster at Brown University, incidence of the virus was highest in high school students, followed by those in middle school and then elementary school.

The findings and the observed data are good news for districts such as New Orleans; Palm Beach County, Florida; and Charlotte-Mecklenburg, North Carolina who pursued phased reopening plans prioritizing the return of their youngest students for in-person learning. While these decisions were largely based on the difficulty of educating elementary-aged students remotely, the mounting evidence suggests that the science may also be on their side — even when it comes to asymptomatic carriers of the virus.

“If the kids are able to control the virus so well, then their asymptomatic (infection) may correlate with that they’re actually not producing a lot of virus. And if they’re not producing a lot of virus, they’re not going to be able to transmit it as well,” said Farber, who also cautioned that the window of greatest danger for infecting others may be right as symptoms are beginning to develop.

Even after the announcement that a coronavirus vaccine may be closer than previously believed, questions remain about its effectiveness and the speed at which it will be distributed once it becomes available. As the country hits new highs in positive cases and deaths, districts may not be able to bank on a vaccine making their choices easier.